I did my first Tour of Myrtle Beach a little over two years ago.  In the spirit of investigation, I decided to revisit the place.

So I drove down here on a Tuesday morning to check it out again.  I looked for a place to park our Honda for 28 hours.   I discovered free parking at a public boat launch near the northernmost spot of the Myrtle Beach “Grand Strand.”   My mission was to bicycle the forty or so miles south to the end of the Strand, spend the night there, then bicycle back the next day.   For almost all the way a bicyclist can weave through residential streets.  Only on a couple short sections did I have to get out on the main highway US17. 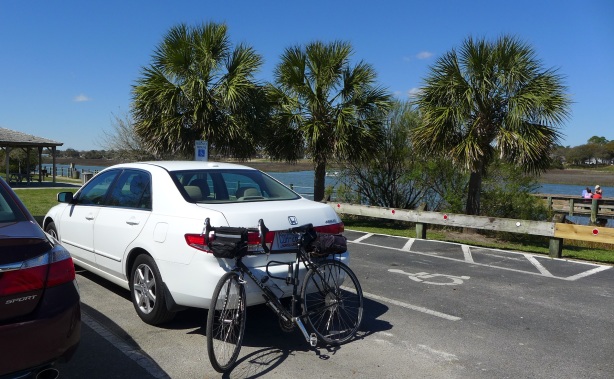 For a guy from Chapel Hill it is very easy to generalize about the people here.  I am sure those generalizations are mostly mistaken.  Next to my car I talked to two guys that were discussing fishing tackle.  The shorter white guy was from Vermont, maybe about sixty years old.   He said he spent three to four months a year in Myrtle Beach.  He loved it in the winter, but could not stand the summer heat.  The taller guy, an African American, had a large white Ford pickup with Maryland plates.  He said he and his wife had been visiting Myrtle for twenty years.  Their children had now gone off to college, and they recently moved here full-time.  He said he was sick of cold weather and loved the summer heat.

But most people probably drive here, usually in large vehicles, frequently towing something.  I saw Ohio, Ontario, New York, and Pennsylvania license plates constantly.    Instead of towing something, people often drive their motor homes.  This area seems the world’s capital for motor homes and other giant travel vehicles.

For three years in about 1966-69 my parents owned an eighteen foot travel trailer called a Zipper.  When I was twelve or thirteen years old my parents drove down to Myrtle Beach from Virginia Beach, taking me, my three siblings, and our dog Inkie in our Rambler Ambassador station wagon towing the Zipper.   I do not remember why we came here, but they were always driving us to some historic attraction someplace.   The trailer must have looked something like this. I remember vividly staying in Myrtle Beach at an enormous oceanfront private campground.   And they still exist.    They still take up huge amounts of expensive oceanfront land.   On this trip I saw at least five or six of these places.   This first one has a Christian theme. 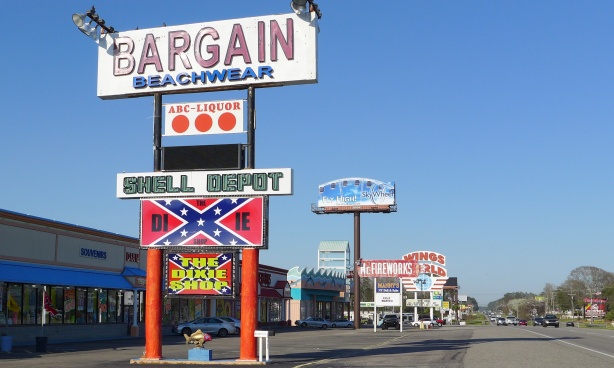 The term “local” and “visitor” might be difficult here, as a lot of people live here part time.  Many people seem to share a cultural and maybe political affinity.   I did not see a single presidential yard sign, except for the dozens of Donald Trump signs.  Make America Great Again, he says.

Inland from Myrtle Beach there are still huge amounts of barely used vacant land.   This is perfect for building golf courses.    People come here from all over just for the golf.  I did not bicycle through many of the golf course communities since they are mostly accessible only from the main highways.   I did go by at least one golf course. 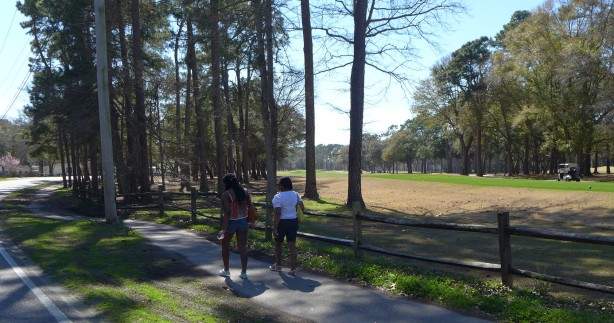 I had a nice ride through the streets of beach towns.    In much of the area, leafy neighborhoods with small houses come within a few blocks of the oceanfront, where the high rises begin.

In the middle of North Myrtle Beach, where high rises along the ocean go on for miles, all of a sudden the development just stops.  There is about a quarter mile section completely cut off from the rest of town, and it looks mostly empty.   On the north side, a high fence extends out as far as the beach, clearly trying to keep people in or out.  After I pushed my bicycle around the fence, this is the view from the inside.

Atlantic Beach, South Carolina was chartered by a group of African Americans in the 1930’s and is still a separate town.  Prior to desegregation, there were many beach areas up and down the East Coast set aside for African Americans.   This is one of the few such towns left.   On this Tuesday in March,  Atlantic Beach stood mostly vacant and quiet.

I got back on the street grid, bicycling down the coast.   In these neighborhoods bicycles with fat tires would be a great transportation tool.   And I did see a few.   Much more common, however, were gasoline powered golf carts.   They were everywhere.

I wanted to bicycle down as far south as the beach road would go.  The motels furthest south on the Grand Strand strip are in Garden City Beach.    I found a room at this place for a reasonable price.

The view from the ground floor room was great. 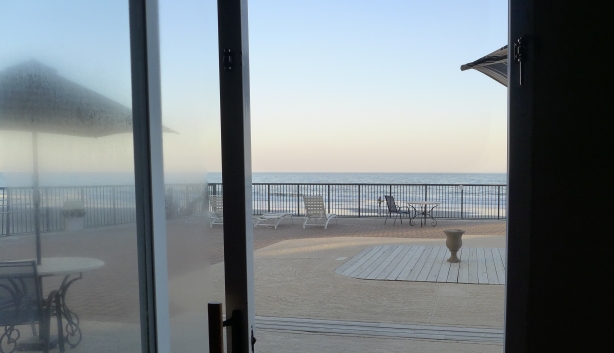 I ate that night at the Conch Cafe.   Blackened rib eye and shrimp is not something that I normally order, but it was much better than expected;  the best fried shrimp I have had in a while.

When I first rode by this place at 5:45 PM it had been packed.  At 8:10 PM the crowd was thinning out.  The woman at the bar next to me was telling her companion about her pastor, and how much she likes Barefoot white wine.     Peaceful Easy Feeling was playing on the sound system. 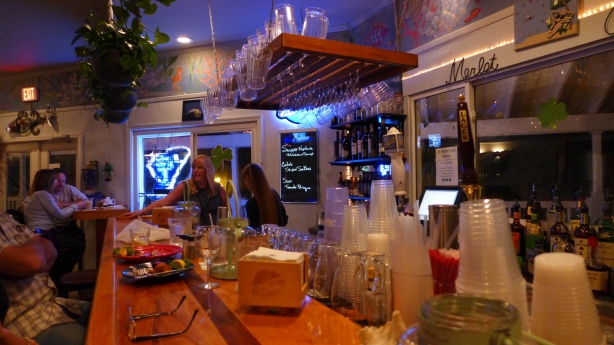 I bicycled back on the sidewalk in the dark the half mile to the motel.

The next morning at 6:55 AM I could hear loud women’s voices outside.  I had left my sliding door cracked open to listen to the ocean at night.  The voices sounded like they were about fifteen feet away.  I got up and shut the door.  About an hour later I walked outside to look at the beach.  They were still there talking.  You can see my room to the right with the bicycle inside.

I bicycled back north.   I had tried this trip to photograph people as I whizzed by. 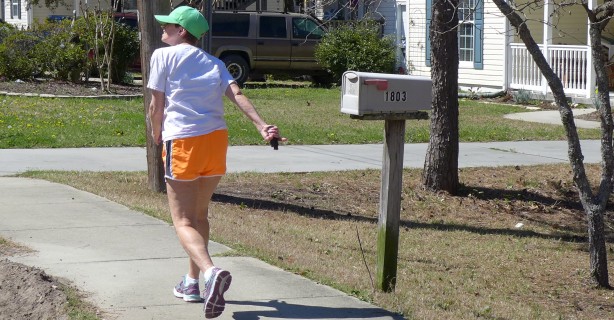 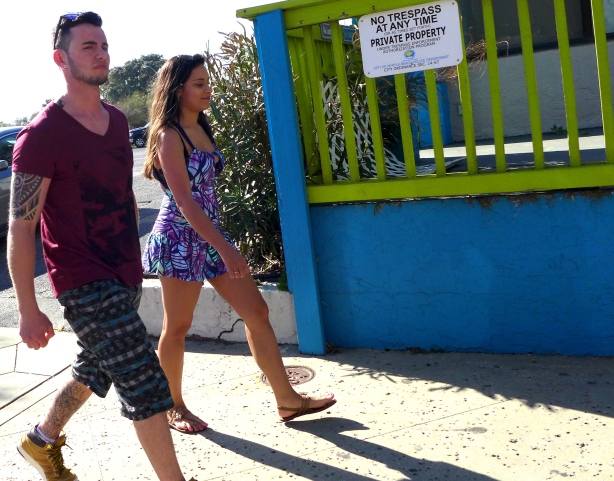 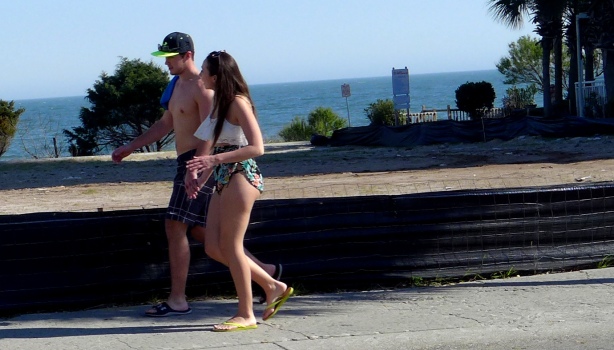 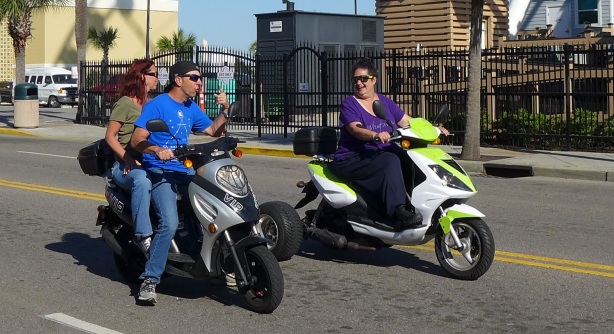 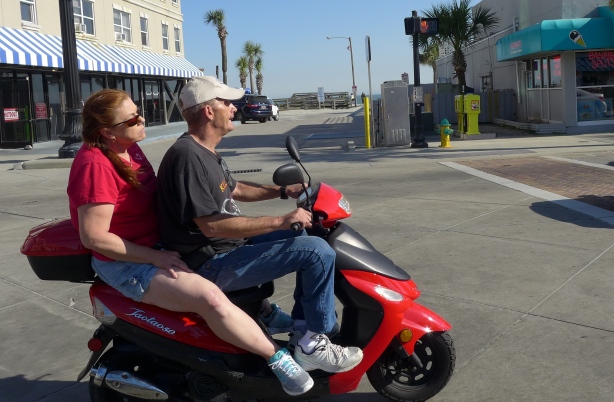 Those of you who read my Myrtle Beach blog from two years ago probably remember all the pictures of modernist motels.   I have tried not to do this all over again, but I cannot help myself.    It the one really cool part of Myrtle Beach, and of course, those in Myrtle Beach do not seem to appreciate it.  Most motels look about the same as they did two years ago, including this first one that is in the same abandoned condition.

This one seems being prepared for the end game.

And there are lots of others, some still quite nicely kept up; others tatty and renting rooms by the week or month.   I could have taken many more pictures; this is just a sampling. 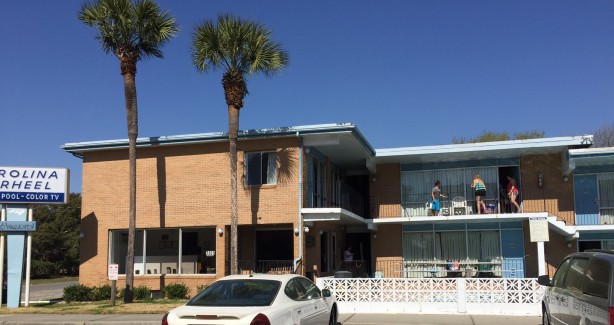 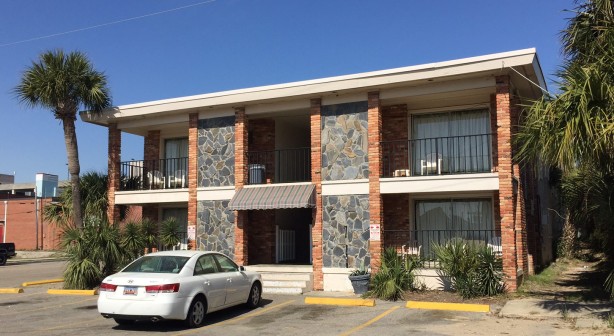 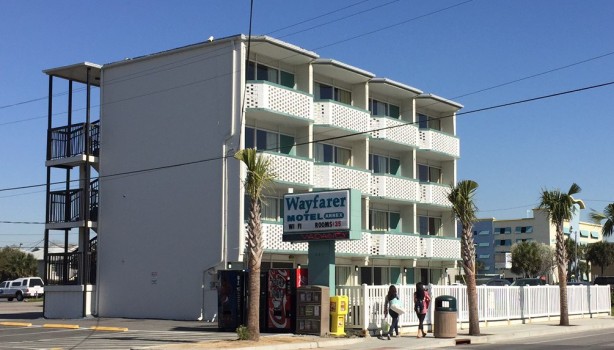 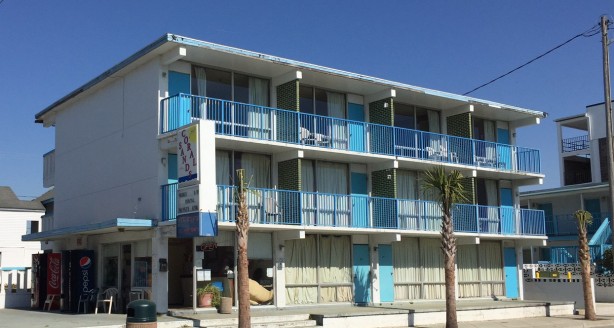