I had a dentist appointment on Monday morning at 8:00 AM; having a tooth crowned.   After almost three hours in the chair, and with a mouth still numb from anesthetic, I came home and made myself a smoothie, the one thing that does not require chewing.  I drank it while I finished packing.  Ten minutes later I rode out on the PBW folding bike.  Tootie was not around to see me off; I think she was working at the office.

My mission was to get to Richmond in about three days.  I had only a sketchy outline of a route. The intermediate goal was the sixty miles to Henderson NC, near the Virginia border.

We live in a building called Greenbridge, on a street that divides Chapel Hill and Carrboro. 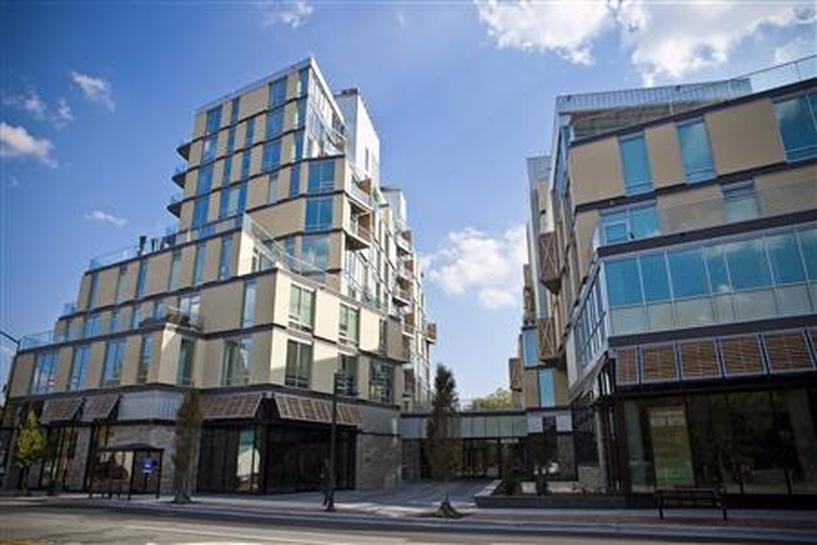 I bicycled about a quarter mile down Franklin Street.  Chapel Hill looks like the quintessential American small town.

Twelve miles away is Durham.   Young people are moving to downtown Durham right now in droves.    Durham is not that much to look at but all sorts of interesting people live there.  I did not go all the way downtown; I passed it by on Buchanan Street, heading towards Club Boulevard, which would take me northeast.

A little further on I stopped for a cold drink at a mini-mart in Stem NC, a town I had never heard of.

Another twelve miles down the road, I passed through Oxford, a town that reminded me I was now in the Real North Carolina, no longer in the trendy Raleigh/Durham/Chapel Hill area.   Oxford has a beautiful modernist public library, with Johnny Reb guarding the entrance.

Across the street, this dog sat patiently chained into the back up a pickup.

Twelve miles further down the road,  I tiredly pulled into a McDonald’s in Henderson at about six o’clock.  I sat in a booth with a small coffee and pondered my lodging and dining options.  On Yelp there was a Greek restaurant in downtown Henderson called George’s that sounded great.  However, in Henderson there are no motels near downtown.  I did not want to risk bike riding long distances in the dark after dinner.    The entire commercial heart of Henderson has moved two miles out to Interstate 85.   I can list many North Carolina towns that have this same situation.   Unlike cities like Raleigh and Durham, where young people are moving downtown, the smaller towns have been decimated and their downtowns have not recovered as well.   Everything in Henderson is out by the highway.  In fact, near the highway the older strip developments are suffering because of the newer strip developments.

At this Ford place a salesman told me this fetching showroom was built in 1972.  He said Ford was pressuring them to tear it down and replace it with a standardized corporate building.

Around the corner from this was a Roses store.   Henderson was the original home of the Roses chain.   Anyone who grew up in Virginia Beach in the 1960’s remembers the two Roses;  on 31st Street and on 17th Street.  They were smaller then; what we then called a dime store.  When I was about twelve it was a huge part of my life, my friends and I bicycled to 31st Street and then hung around Roses.   Decimated by Walmart,  the remnants of the company are now owned by right-wing advocate Art Pope, who has been instrumental in wrecking North Carolina government for the past couple of years.   I guess they leave a store in Henderson, for old time’s sake.

So I got a good deal at a Red Roof Inn, right near the Interstate.   A Ruby Tuesday was close by.  I could have walked across the wide street from the motel but chose to bike there.

I snobbily assumed that I was selling out by going to a chain restaurant.   Actually,  Hickory Bourbon Salmon cooked rare was delicious and healthy.   The scene at the bar was delightful with all kinds of people, except maybe not the kind of people who seem to be in Chapel Hill.   I only drank white wine, but people in Henderson were drinking serious cocktails.