It was only about ten years ago that I discovered the music of The Carter Family.  While various Carters performed in various combinations up until recently; and indeed continue to perform, the original nineteen twenties recordings are what struck me.     These recordings were produced by Ralph Peer, who I just read a biography of.    He was not a touchy-feelie folklorist but a businessman who revolutionized the record business.  He successfully found musical acts outside of the then American mainstream, and made it a profitable relationship for both parties.

Ralph Peer came to Bristol, Virginia in the summer of 1927 looking for talent to record.     He set up a portable studio in a rented room, and put out the word for locals to come audition.  The Carters lived twenty-five miles away in the mountains outside Bristol in a settlement called Maces Spring, Virginia.    The Carters; husband and wife A.P. Carter and Sara Carter, and Sara’s cousin Maybelle Carter borrowed a car and drove down the mountain to Bristol.    Many say the Bristol sessions,  which also included the future star Jimmie Rogers,  were the real birth of country and bluegrass music, recorded folk music, and Americana music.

I wanted to take a bike trip in that region and maybe feel the mountain vibe of the Carter recordings.  The weather was predicted in the nineties all up and down the East Coast, but amazingly at least ten degrees cooler up in the mountains.   And I had never explored this border region between northeastern Tennessee and southwestern Virginia, near the far northwestern reaches of North Carolina.   I could have actually biked up to the Carter homestead of Maces Spring, but the bike path from nearby Abingdon seemed a more pleasant bike ride.

I drove three and a half hours on the Interstate from Chapel Hill to Abingdon, Virginia, which is eighteen miles north of Bristol.   I parked the car around lunchtime on the street in Abingdon and took the bicycle out.    My first day was to be on a rail trail called the Virginia Creeper Trail leading thirty-five miles east from Abingdon into the mountains, with the town of Damascus at the halfway point.

Once I started biking on the Virginia Creeper Trail, cell phone reception soon ended.    I had only two Carter Family songs on my I-Phone’s hard drive, so I listened to Wildwood Flower and one other song over and over, playing through a small Bluetooth speaker.   Wildwood Flower consists of just Sara Carter’s vocals and eighteen year old Maybelle Carter’s amazing guitar, which sounds like two guitars instead of one.

By necessity, both railroad tracks and roads in the mountains tend to follow stream beds.  The scenery around the railbed was gorgeous, the air crisp, the life in the shade of summer sun invigorating. 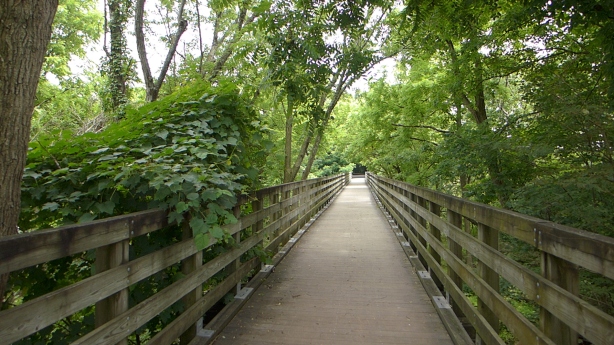 The path also went through open fields and by numerous houses and small settlements. 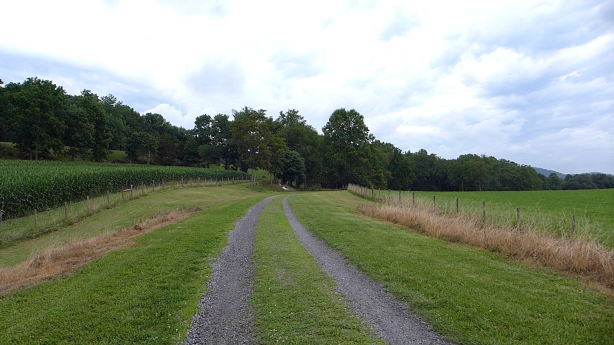 I stopped for water and a bathroom break in Damascus.   This is a small town, less than a thousand people, not served by any four lane road.  It is one of the very few towns directly in the path of those hiking the Appalachian Trail.    It retains its old-time feel, even as it has become a magnet for hikers and bicyclists.    There was this apparently hand sewn needlepoint prayer in the public men’s room in a public park of Damascus. 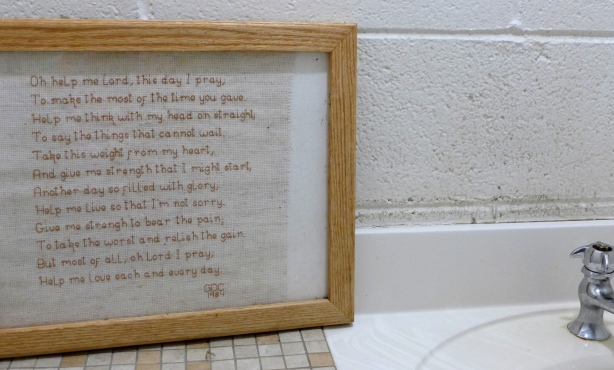 One of the pleasures of rail-trails are that they are relatively level, even in the mountains.   This trail is about level the first half from Abingdon to Damascus, and then turns uphill in a steady but slight uphill grade.  The second half gains fifteen hundred feet in altitude in fifteen miles until the trail abruptly ends at the North Carolina border.  I had made a reservation at a bed & breakfast that night in Damascus, but I still had some energy, so I rode ten miles further uphill on the trail, and then doubled back down.   As the trail gained altitude the scenery became even more lush. 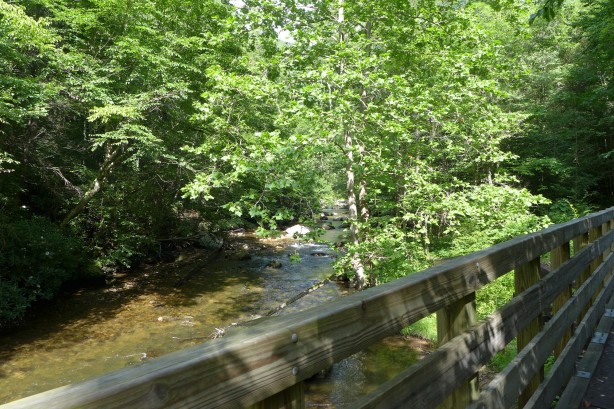 Riding back down to Damascus was particularly easy, as the grade was just steep enough that one did not have to pedal, but not so steep as one would have to brake constantly.

I arrived tired and thirsty back in Damascus.  While Damascus feels quite old school on some levels, on the highway near my B&B is The Damascus Brewery, where half  of the six cars in the parking lot seemed to be Subarus with North Carolina plates.  I stopped for a porter.

The B&B was an interesting place.  I had made reservations that morning because I predicted that the supply of rooms on a summer weekend in Damascus might be tight.   However, this place has four rooms and I was the only guest.  I had the entire renovated and very clean 1895 house to myself.  The owners sleep in a garage apartment next door.    They were extremely polite and helpful, and had lots of cookies, wine, and coffee on hand in case I wanted any.   There was a Ted Cruz sticker on their Honda, the other car had a special In God We Trust Virginia license plate.

I biked into town to find dinner, and poked my head into each of the three places.    I was surprised that nowhere was crowded.   The Old Mill Inn was actually quite O.K.   I ate outside next to the river.  Inside there was a guitar guy playing competent but uninspiring versions of 1960’s hits, accompanied by a rhythm machine.  That was disappointing as I had expected to hear something more homegrown.   I know from the mountains of North Carolina that roots music is indeed thriving, at least somewhere.

I rode my bike back to the B&B in the gathering darkness.

I decided that night that I would ride the next day to Johnson City, Tennessee fifty miles to the south, over a mountain.

I woke up in the morning and stared at the ceiling.

Breakfast was substantial:  three eggs with a lot of salt, bacon, home fries, biscuits, fresh fruit.   It was delicious but I usually do not eat so much in the morning.   I forced myself to eat it all, since lunch would be a long way away.    I bid the owners goodbye and took their picture.

The Tennessee line is only about a mile south of Damascus.   I rode through town and then into the woods.

For almost twenty miles the road climbed upward through Cherokee National Forest, topping out on a county line.   It then descended about fifteen miles to Elizabethton.     Cars passed only about one every ten minutes.   It was all beautiful;  I felt at peace with myself, for once.   I passed through the shortest tunnel I have ever seen. 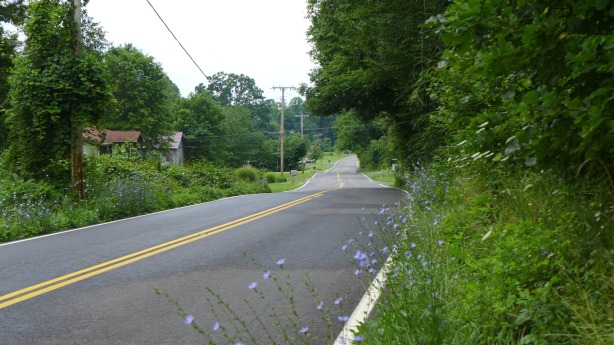 The road interspersed between wilderness and areas of housing along the road, becoming gradually more populated as I descended into the valley.  Along this road, and also along the path the day before, I saw an unusual number of decaying recreational vehicles.  Some seemed to be weekend getaways permanently parked, others just left in someone’s front yard to die. 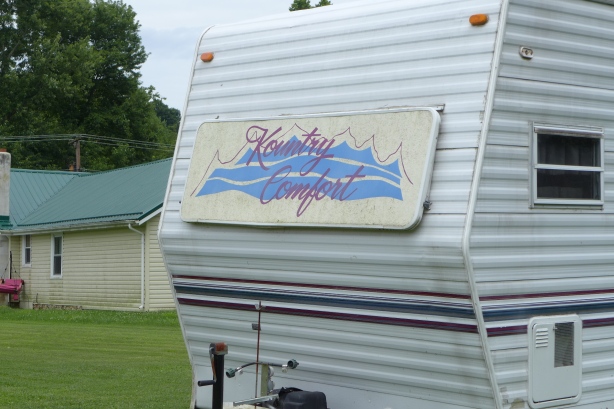 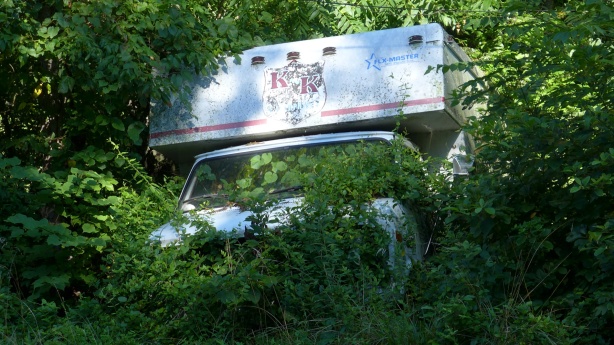 I saw this interesting church.

And a lot of unusual yard art. 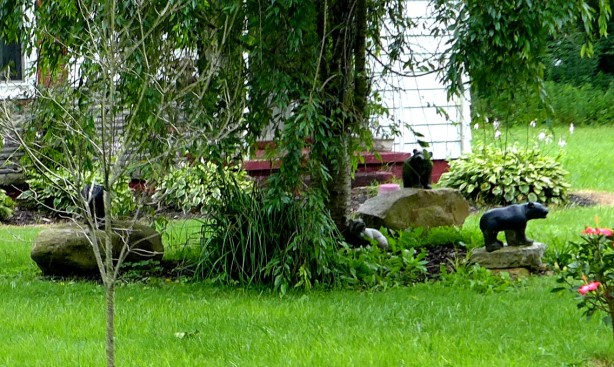 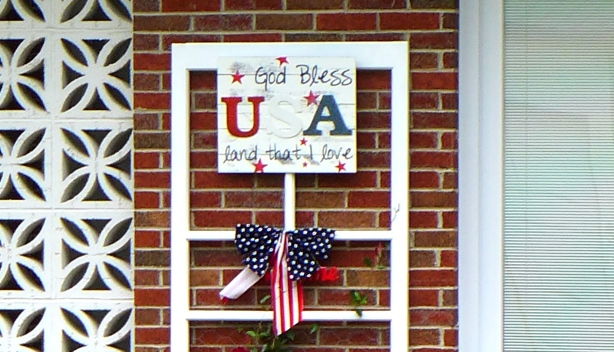 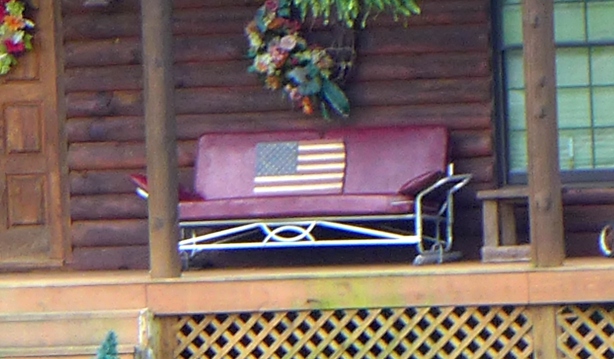 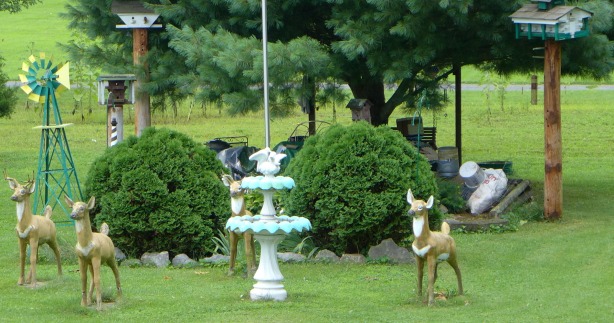 I was clicking pictures while biking and by accident caught this slice of life. 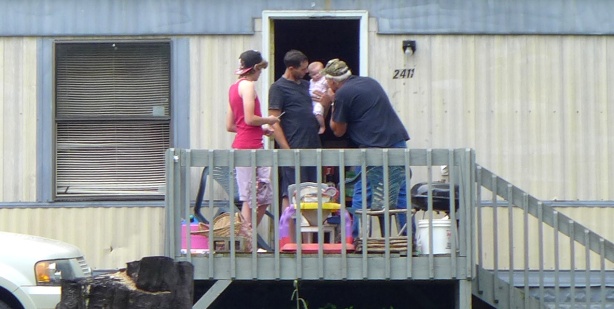 Elizabethton is one of the oldest towns in Tennessee, dating from the 1780’s.    I was reminded how Tennessee in the late eighteenth century really was the western frontier, and places like Elizabethton were the gateway to settlement of new lands further west.

Elizabethton has an older downtown strip, typically partly vacant and depressing looking.   In a prominent position where the downtown strip meets the Doe River, this bank building was more impressive.

In that same downtown strip, a slice of cheese pizza at Jiggy Rae’s Downtown Pizza really hit the spot for lunch.

For this day, Elizabethton was my return to civilization, to the Real America of Walmart.    There is a nice rail trail bike path called Tweetsie Trail that goes all the way the ten miles to Johnson City, much of  it through suburban sprawl.

Entering Johnson City from the east, this snow cone truck had considered and creative concoctions. 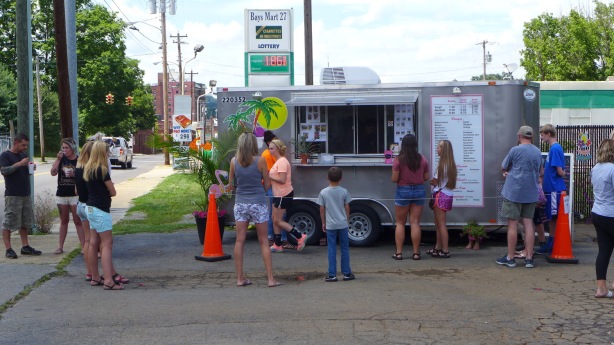 Being me, I bought the smallest and simplest, a small chocolate, even though I had just ridden a bicycle fifty miles in the heat.

Others were not so simple. 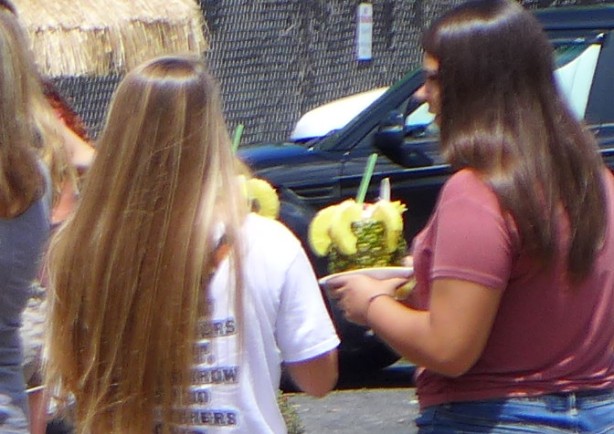 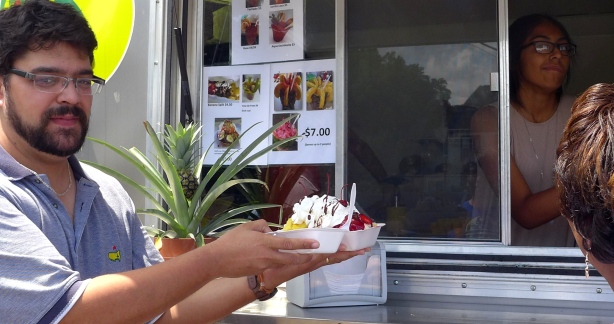 Other than the snow cones, Johnson City, population sixty five thousand, seemed just O.K.    I spend the night there and had a nice dinner, but nothing seemed distinctive.  Like other cities, the formerly vacant downtown is being revitalized with bars and restaurants.  I snapped pictures as I rode out the following morning.   This brewpub in a former train station does look nice.

High on a hill in what looked like a nice older neighborhood was this gem.

It was Sunday morning.   Under fifteen hundred feet in elevation, it was going to be hot.  My mission was to ride twenty-five miles to Bristol Tennessee slash Virginia, then the additional eighteen miles back to my car parked in Abingdon VA.

In the suburbs near the Interstate I stopped for an Egg McMuffin.   I had not had one in a while.  It was not as good as I had remembered.    I checked out the other McDonalds patrons at 8:30 on a Sunday morning.

Sundays have less traffic and car drivers seem less in a hurry.   That was helpful, because there is really no other route between Johnson City and Bristol than this highway, although it did have a full lane wide shoulder.

Two thirds of the way to Bristol, I passed the Bristol Motor Speedway, a NASCAR track.    It looked enormous.  From Wikipedia I learn that it is popular because it is a short track with steep banking.    I was shocked to learn that it is the eighth largest stadium / sporting event center in the WORLD.  It holds 160,000 people  Who knew?

Seriously, this is not a hotel.   These are condominiums across the highway from the track, for really serious fans.

I rode a few more miles before getting into the city of Bristol.

Bristol is in two states.  The main downtown street State Street divides the city, with one side of the street in Tennessee and the other Virginia.   I am sure that there is a “nice” area of Bristol but I somehow missed that.   The neighborhoods in both sides of town that I biked through looked impoverished.    Downtown, however, seems OK.   At 11:00 AM on a Sunday people were having brunch.

And this is where the Carter Family got their start in the record business, right within a block of the two photos above.   Of course, the building has been torn down and it is now a parking lot.

I will confess that the recording of Wildwood Flower shown earlier in this blog was not actually recorded in Bristol; it was recorded nine months later when Ralph Peer had the Carters come up to the Victor studio in New Jersey.   But some of the early Carter Family hit records really were recorded in the original Bristol sessions.  This one touches on a frequent Carter Family theme: death.  (Girl to boy: I know you do not love me, so when I die, I hope you stare at my grave and weep.)

It was getting hot, so I got back on the bike to pedal the eighteen miles to my car in Abingdon.

US11 from Bristol to Abingdon parallels Interstate 81.   Biking on the “old road” one passes highway stuff from long ago.   This motel pool seemed stuck in time.

This motel has become a mini-storage, but they kept the sign.  And then there is the drive-in movie. 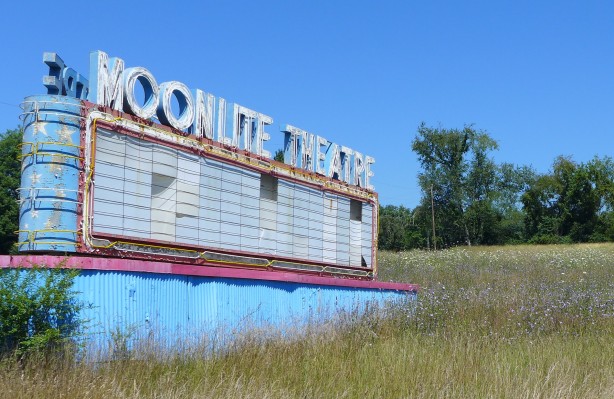 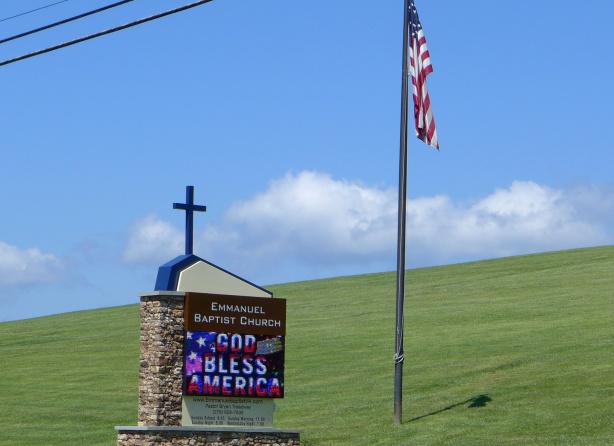