I had read about the recently completed Virginia Capital Trail,  a delightful paved bike path that runs over fifty miles from Williamsburg to Richmond, along Virginia state route 10 on the north shore of the James River.   Historic plantations, many from the 1600’s, line the route.    The original Virginia colonial settlement of 1607,  the Revolutionary War, the War of 1812, and most of all the Civil War; it all happened here.       There is a creepy old schooledness about the area.    The level of history seems oppressive; it makes it hard to concentrate on the present.  It felt very Southern.    Tootie commented that she could sense in the air some of the pain from all the slaves that used to work this land.

In the middle of Labor Day Weekend, we drove up from Chapel Hill and parked the car at Charles City Courthouse, just over thirty miles from downtown Richmond.   We pulled two bicycles out of the trunk of the Honda and set off.    The plan was to ride to Richmond, spend the night, then ride back.

Along the way you cannot see the river unless you turn off the path and bike several miles down dirt roads that dead end at some plantation house sitting on a bluff overlooking the river.   About eight miles into the ride we turned down a side road to go see Shirley Plantation.   I had remembered my parents taking me to visit it when I was a child.   As a farm it claims to be the oldest family business in America, founded in 1614 and with the same family running it since 1638.   The same family has lived in this house since it was completed in 1738. 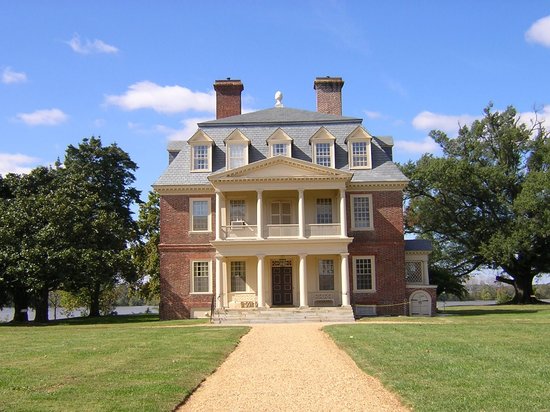 The bike path runs along farm fields growing both corn and what I guess is soybeans.

There are almost no restaurants along this trail and hardly even a mini-mart.   We had brought our own picnic lunch, and stopped to eat, sitting on a fence.

There is so much history, and there are so many historical markers, that sometimes they bunch together.

We did find a mini-mart when we were almost at the Richmond city limits.

On the other side of Richmond, the west side, Richmond sprawls out for many miles.  On this side, the southeastern side, there are still woods and fields within a few miles of downtown.

We were both sufficiently tired when we rode through downtown and Shockoe Bottom, then uphill from the river to Richmond’s uptown neighborhood of The Fan.

There are plenty of hotels in Richmond, but almost none in The Fan, so we had booked an Airbnb.   This one was run by Catherine, about our age, who says she is a dancer.   She inherited the row house from her parents.  She rents out part of the house as apartments, and lives in a two bedroom portion, one bedroom of which she rents out on Airbnb.     Compared to some other Airbnb situations, this one felt more like we really staying at her home, with all the good and bad that entails.  She was super nice and interesting, but we did not have a private bathroom, and we knew she could hear us through the wall.  It was the first cool day of the end of summer, and the windows were open, and our room had a screen door to the outside.   The breeze was calming and therapeutic as we chilled out and read our Kindles.     We had a fetching view of the wall of the house next door.  It all felt pleasantly urban.

At about sixty thirty we took a long walk in the refreshing cool air through The Fan and into downtown.    Broad Street is the traditional wide shopping street of Richmond, but has had mostly empty storefronts for the past forty years.   As the Richmond downtown revitalizes, these spaces are gradually filling up.    After checking out several options, we sat at the bar and ate Italian at a place on Broad Street called Graffiato, in a space with high ceilings.

Across Broad Street was an interesting piece of milk bottle architecture.

The next morning we biked about ten blocks across town to a Starbucks on Broad Street.   On the way, we passed through parts of the VCU campus, which is pleasantly integrated into the urban fabric.   This brutalist building from 1971 is singularly unattractive, but you have to admire their chutzpah in getting the thing built.

The bike ride back to the car in Charles City was a pleasant on this sunny day, at least before it got hot.    The bike path was sometimes so busy that you had to take care not to run into people.    On the southeast side of Richmond, former industrial areas are being rehabbed into apartments overlooking the James River.

The wind was now at our back.  Life was good, but we were both tired as the day progressed.  When we got back near the car  Tootie reacted after telling me to stop taking her picture so much!