I set out to walk Richmond, Virginia from one end to the other.   This was not a bike ride.  If I do many more walks instead of bike rides I will have to start a new blog!

Richmond VA has a genuine city feel and is close to home.   This was an urban hike:  point to point.   We started in Church Hill, a Richmond neighborhood east of downtown, the site of St. John’s Episcopal Church,  where Patrick Henry gave his famous 1775 “give me liberty or give me death” speech.    I am from Virginia Beach and my father grew up in nearby Norfolk.   We had always snickered at the supposed snobbishness of the Richmond elite.  “These” people have traditionally lived on the west side of town.  Why not walk from Church Hill on the east side, to the temple of the upper class on the west side, the Country Club of Virginia, a place I had never seen?   This would be our route, starting in the bottom right corner of the map below. 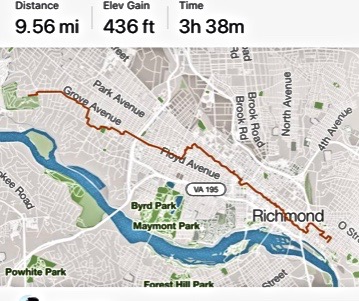 Accompanying me was my friend John Ripley.   Among his many talents is that he has been a successful professional photographer for forty years.  John gives me photography advise sometimes.  The pictures in this blog are mine, as you can see from the incorrect focus on the picture below.   Even on his own time John cannot stop himself from taking pictures.  He brought his super-expensive camera.

We live near each other in Chapel Hill / Carrboro NC.    We chose to drive to Richmond in less than three hours, take our walk, and drive back, all in the same day.   We parked the car on the street in Church Hill. 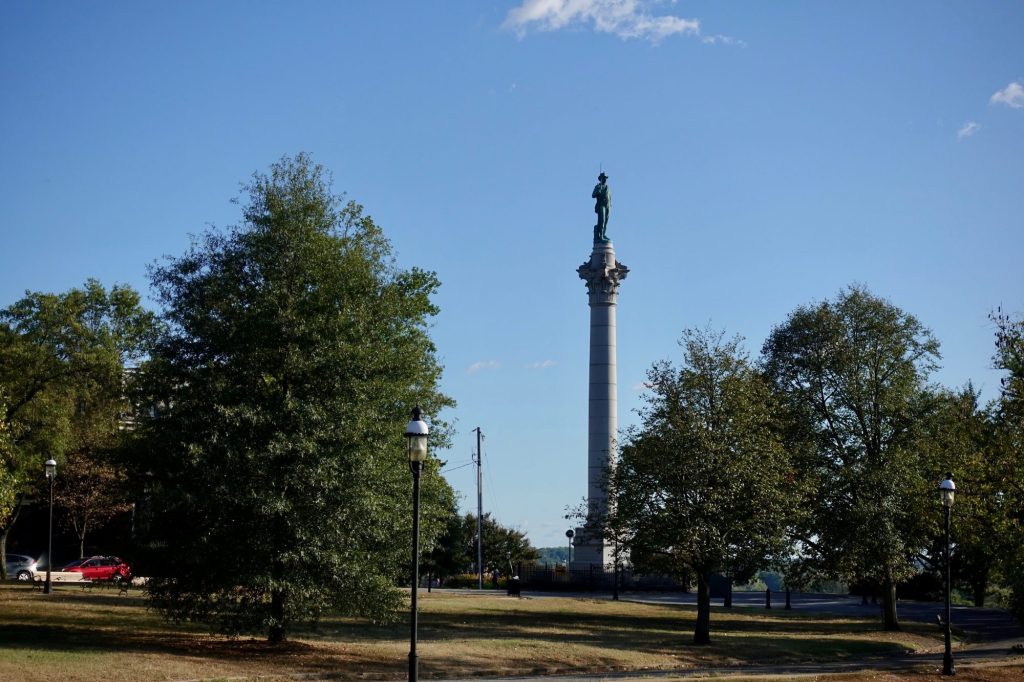 The park sits on a cliff above the James River.   Richmond has gradually and quietly become a very cool place.   Whom I guess to be VCU art students were taking pictures of themselves wearing various outfits; they brought along a portable changing room.

John took pictures of the view of downtown.

Church Hill is a lovely older neighborhood, kind of off to itself. 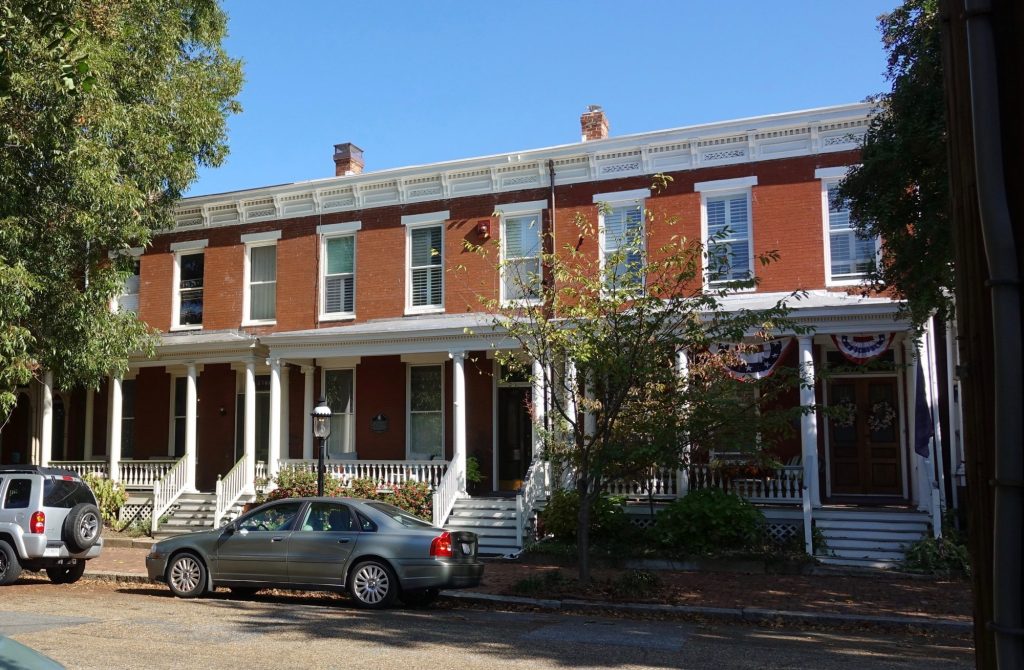 As we walked down the steep hill towards an area called Shockoe Botto.  Some historic homes have survived. 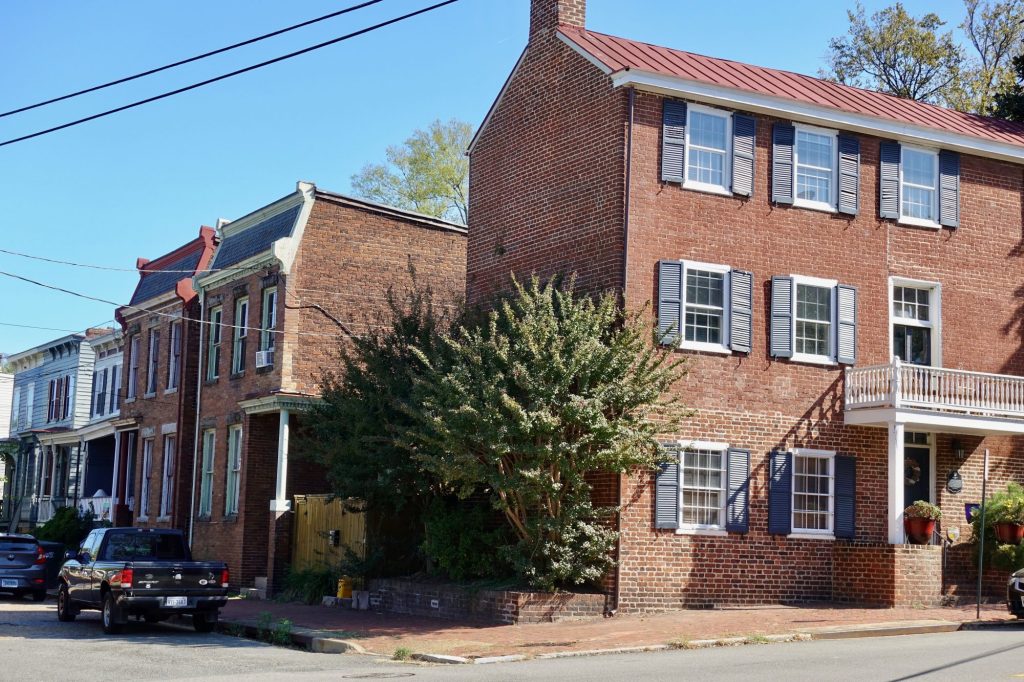 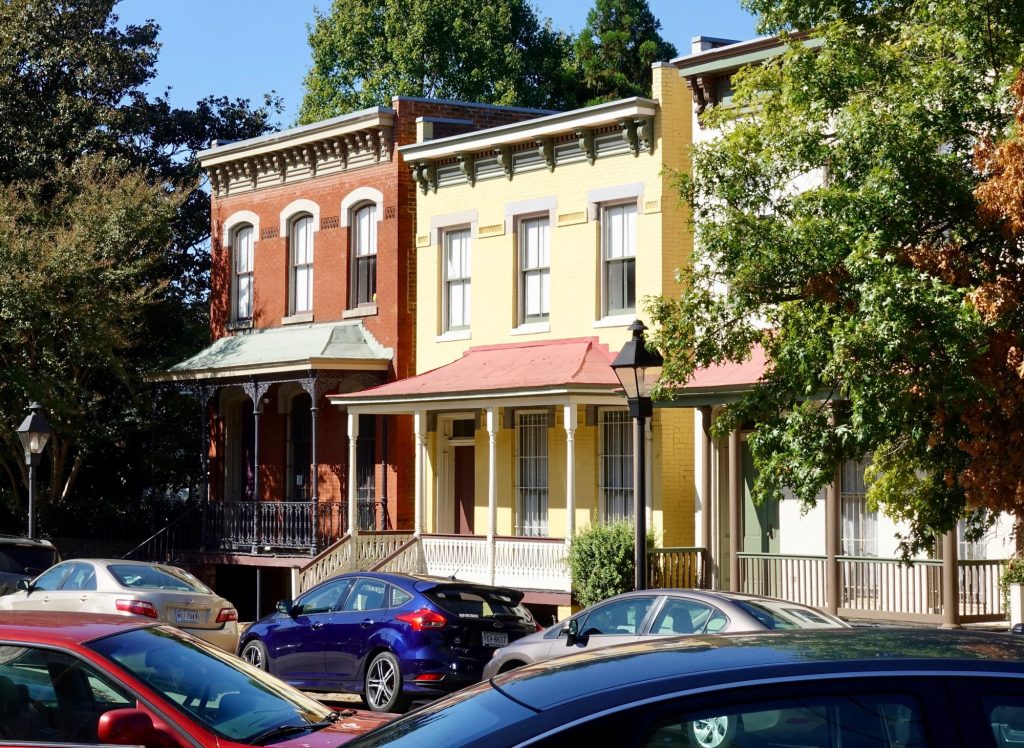 Main Street Station has been visually assaulted ever since I-95 was built in the 1960’s but the station still looks good on a sunny day.

From Shockoe Bottom we walked uphill towards downtown.

My brother Alex has counseled me that iron front buildings were the first stage of the skyscraper revolution in the latter half of the nineteenth century.  I had not known Richmond had one of these.   We walked by the Stearns Iron-Front Building, from 1869. 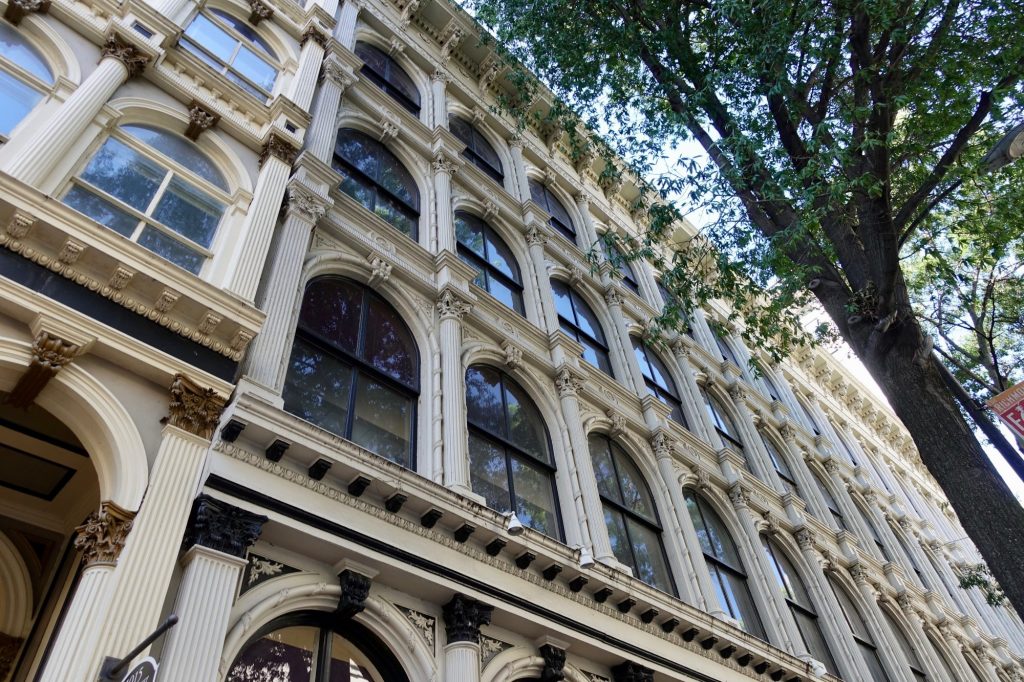 The Virginia State Capitol, designed by Thomas Jefferson, completed in 1788.   The side wings were added in the early twentieth century. 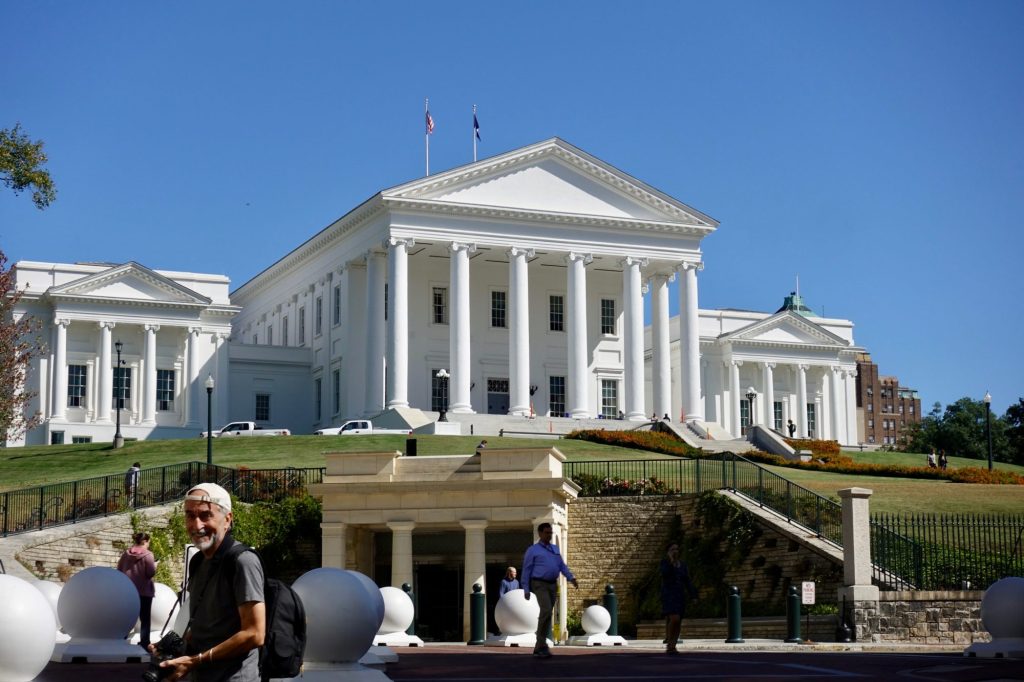 This is John photographing my namesake, built in 1929.  I am not related to the famous Chief Justice.  Although the owners kept the famous sign, it is now apartments, not a hotel. 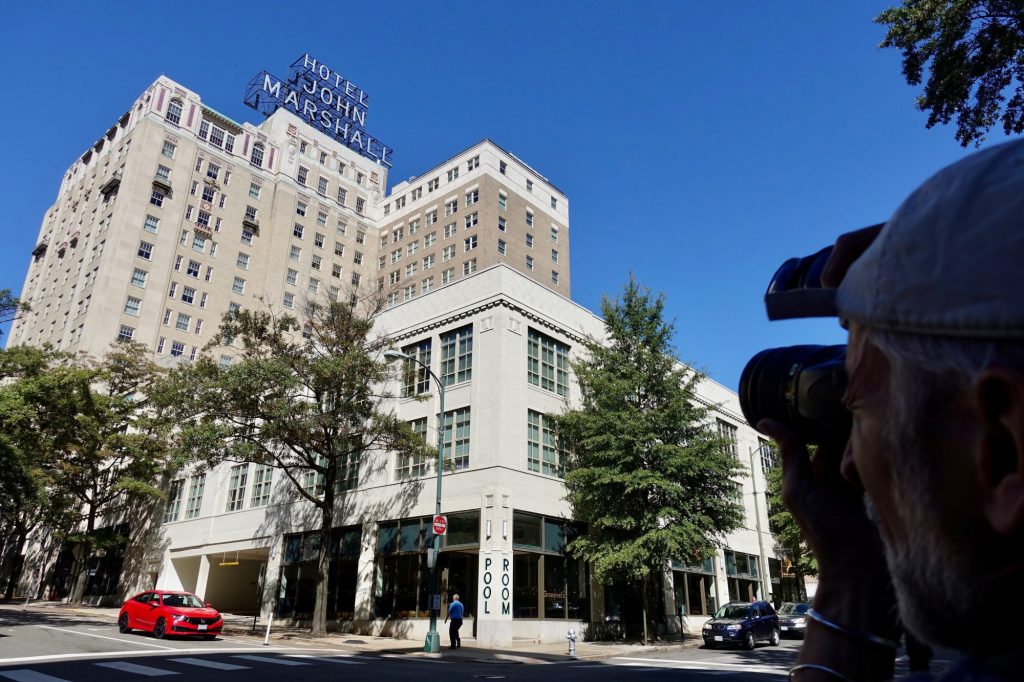 A fascinating novel about Richmond is The Shad Treatment, written in the early 1970’s.   Along with lots of Virginia politics, it describes the places in Richmond where its elite congregate.  The novel changes all the names.   We walked by the Commonwealth Club, a downtown club that is well, just a club.  No golf course.   In The Shad Treatment it is called it the Confederate Club!

Further uptown walking towards VCU there is a mix of the old and the not-so-old.

Very much like what was done with Moore Square in Raleigh, Monroe Park in Richmond has been recently redone.   It looks very nice, surrounded by attractive buildings on all sides,  including this 1920’s theater.   It used to be politically incorrectly named The Mosque, now renamed after a tobacco company, The Altria Theater.

VCU, or Virginia Commonwealth University, has been mushrooming all over surrounding neighborhoods.   John and I stopped for lunch at this coffee house. We found the menu to be all-vegetarian.  We split a tofu based sandwich;  delicious.   John took a picture of the place while I photographed from the other side.

A large area spreading west of the VCU campus is colloquially called The Fan, miles of late nineteenth and early twentieth century row houses.   John stopped to take a picture of this artfully growing vine. 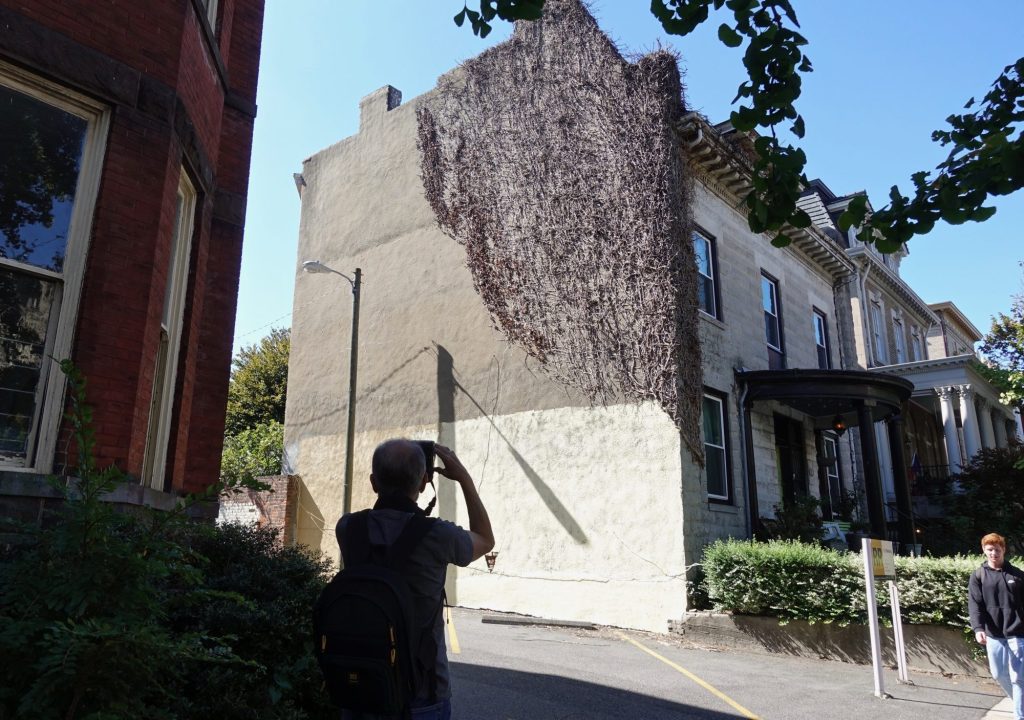 I have a heavy coffee table book called Great Streets, one author’s selection of his favorite twenty urban streets in the world.   It includes parts of Paris, Barcelona, and Rome.   Amazingly it includes Monument Avenue in Richmond VA.  It is indeed a lovely street.  Statues of Confederate “heroes” appear every two blocks.  On the eastern end it begins with J.E.B. Stuart. 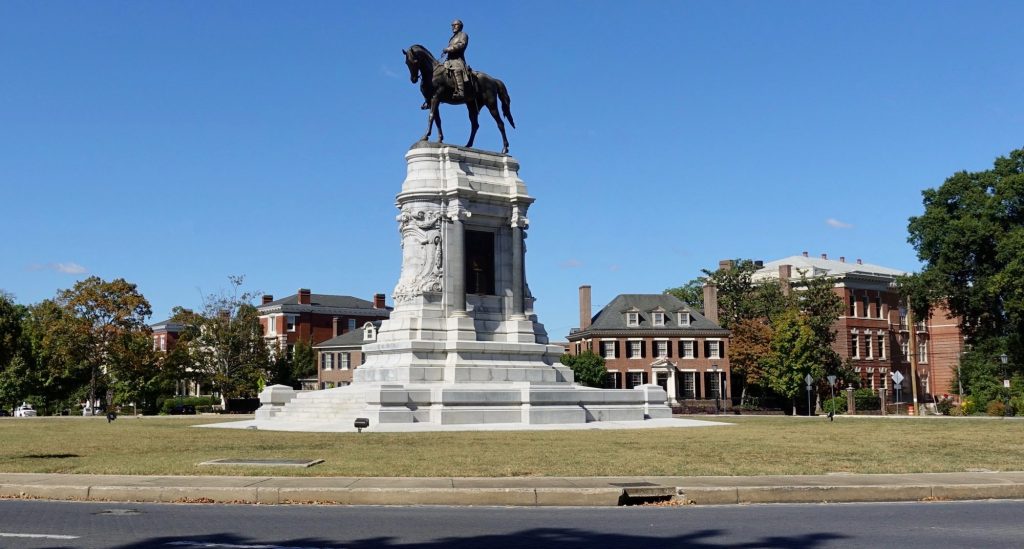 In the current discussion of whether to remove Confederate statues, I do believe there are gray areas; discussions of tone, place, and content are appropriate.  Two blocks after Robert E. Lee the monument honoring Jefferson Davis crosses the line further than any Confederate monument I have ever seen.  Every time I come here I am shocked at the extended creepy verbiage about the valiant lost cause and Davis’ underhanded full arm salute.

John and I were so grossed out by Jefferson Davis that we headed off Monument Avenue for a parallel street.   Before leaving we admired and photographed this row of houses.

The walk continued.   There is actually street life in The Fan.

The further west we walked the newer the buildings became.   I guess these houses are 1930-40’s.

We walked across I-195 and as the houses became newer they were more set back from the street, with larger yards. 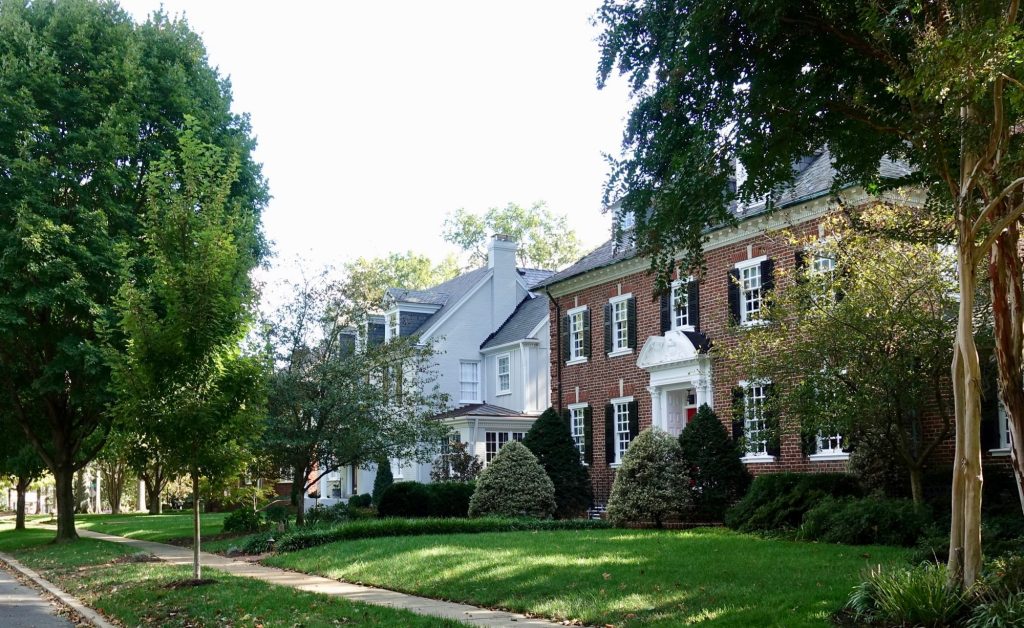 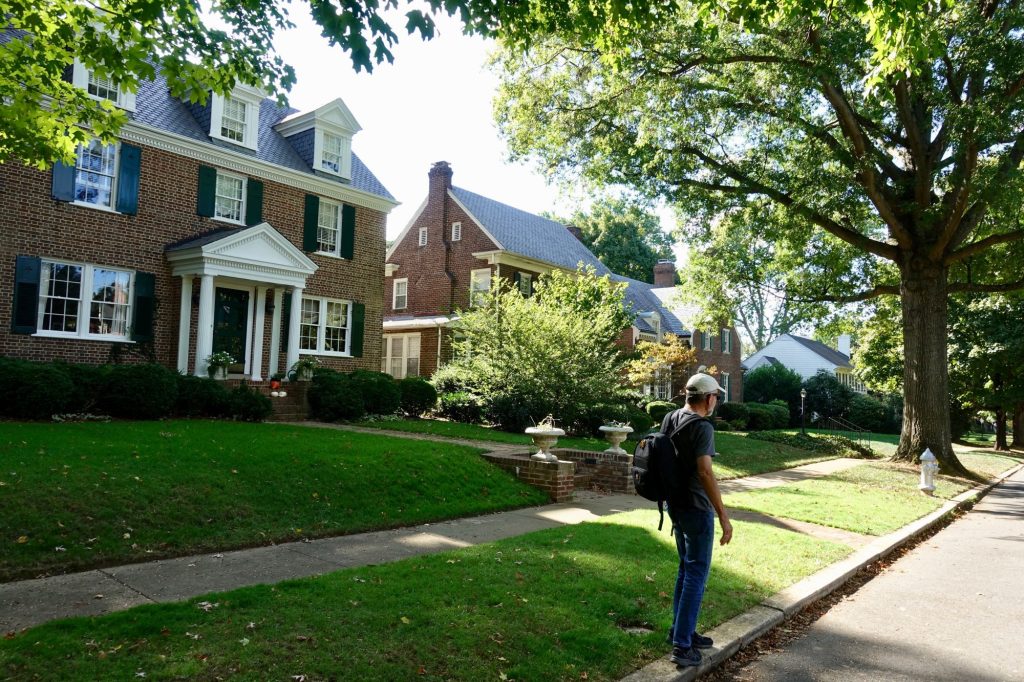 Owning a 1990’s Volvo station wagon makes a certain kind of style statement.  John my co-walker owns three, if you include the one he passed down to his adult son.    Here in Richmond we passed by someone who evidently also owns three, and chooses to park them on the street! 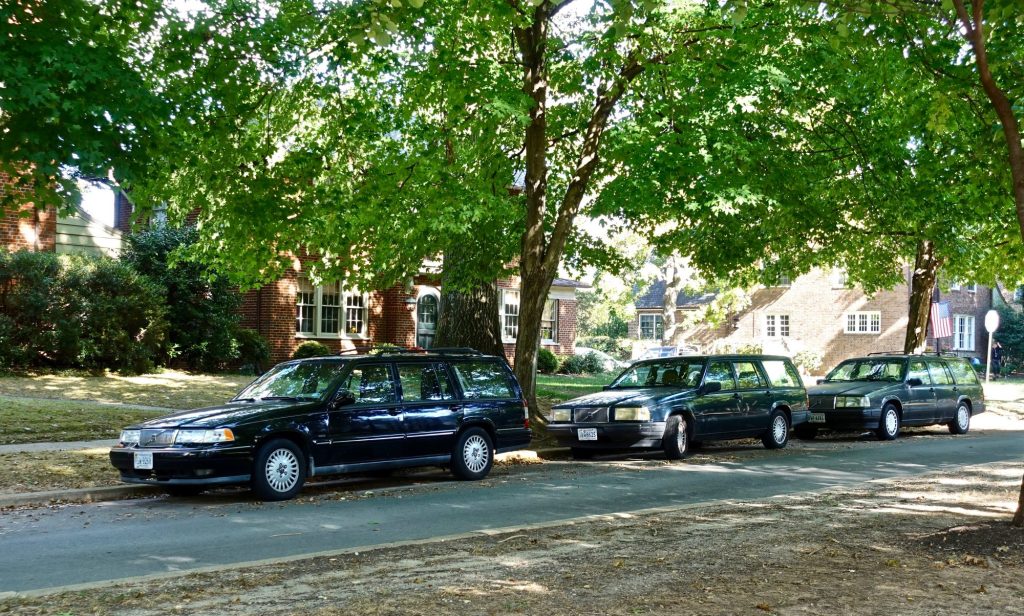 The further out we walked the less pedestrian friendly these wealthy neighborhoods became.   There were many spots where there were no sidewalks.   There are lots of dead end streets.   Walking became difficult at times because there was nowhere to walk.

John was not tired.  He can walk all day at high speed.   He was confused, however.   “Why are we doing this?” he asked.  Walking on a narrow near-highway was not fun.   I encouraged him to press on. We finally found better streets to walk on.  We had set out with a goal, we had to complete the mission, to walk to the Country Club of Virginia.

Just before arriving at our destination we passed St. Catherine’s School.   I had heard of this place all my life but had never seen it.   It was, and probably still is, where the elite of Richmond send their daughters.   It is definitely referred to in The Shad Treatment, I cannot remember what the author changed its name to.

We had to hustle across some traffic filled streets but finally found a dead end road that led to our destination.   We had arrived, we had completed our ten mile walk.

One inspiration for this Richmond walk was a conversation I had had six years ago on one of my bicycle trips.  I had found myself eating dinner at the bar of the nicest restaurant in Staunton VA, about a hundred miles from Richmond VA, talking to a man who was maybe just a few years older than me who was overnighting on a business trip.   Unprovoked by me he started baring his soul, talking about regrets in his life.   He described himself as a successful lawyer in Richmond.   He had lived in Richmond for thirty years but was originally from New England.   He loved golf.   He expressed regret that he had spent the prime years of his life in Richmond because he said he was never accepted there by the locals.   The worst stain was that he had never been asked to play golf at The Country Club of Virginia.   Not even once.  What could I say?  I just listened. 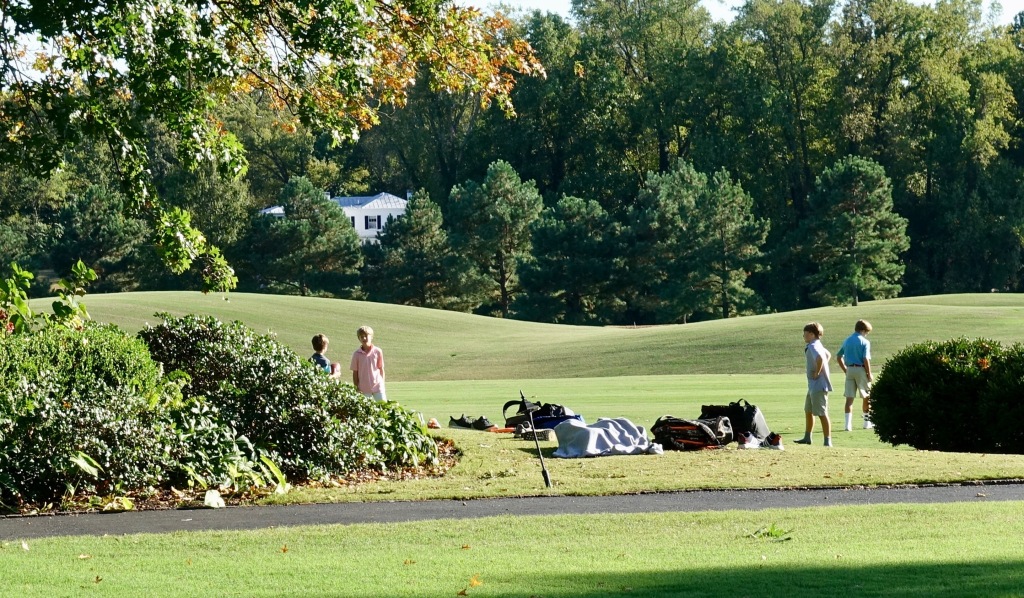 John and I walked inside the club for a brief moment, then called an Uber.    The Uber guy took us back to our car on the other side of Richmond.   We were home in Chapel Hill NC in time for dinner.