In the early 1970’s I saw several very hot shows by The Marshall Tucker Band;  the Caldwell brothers on guitar and bass that both played with their thumbs instead of a pick.   Between songs they would repeatedly proclaim in a Southern accent  “we’s all from Spartanburg.”  I had not been a fan but stumbled onto them at concerts, mostly at the Norfolk Scope coliseum.    Just a few days after I graduated from high school in May 1974 I went with my group of friends to a concert by The Beach Boys at Scope; backup band The Marshall Tucker Band, opening was the relatively unknown act The Eagles.  (“Hello, we’re the Eagles, from California” followed by opening chord to Take it Easy.)

The Marshall Tucker Band seemed the most exotic of the lot.   Although it is not all that far from Norfolk I had never heard of Spartanburg, South Carolina and I certainly did not know any long hairs who dressed in cowboy shirts.   This video is from that same era.

For some strange reason that braggadocio has stuck in my head all these almost fifty years.  The Marshall Tucker Band still exists but both Caldwell brothers have sadly passed.  I still had never been to Spartanburg.  This was not only MY romantic obsession.  Only about a year or two year ago my brother Alex was musing about cities around the USA where he might like to move to with his wife and child.  He seriously included Spartanburg in his short list mostly because of that 1970’s claim “We’s all from Spartanburg.”  It sounded to him like an interesting place.

I like reading about cities and their planning and development.   Spartanburg is less than forty miles from Greenville, South Carolina.  Greenville has recently become nationally known as an aging textile city successfully reinventing itself.   Both sounded like a perfect destination for a bike ride.

There is long strip of textile cities and towns moving down the central East Coast along the eastern slope of the Appalachians, starting with Danville and Martinsville, VA, through North Carolina and down into South Carolina and Georgia.  In this current century the textile industry has mostly closed down.  Some of these towns and cities have rejunivated themselves better than others.  The entire region remains oriented around manufacturing.

I picked the faded textile town of Shelby NC, forty miles north of Spartanburg SC,  as a place to start my bicycle ride.   Shelby was the boyhood home of banjo great Earl Scruggs.  I drove the three hours from Chapel Hill NC to Shelby in the Prius, and parked in my usual kind of place, a Walmart.

Walmart knows its customers.  To most Americans a one really safe place is your car.   Walmart always has a parking spot waiting for you.  Walmart apparently does not care if you park your car, or truck, or motor home, or tractor trailer for an unlimited amount of time.  Come on over.

On the back of the bicycle my readers can see a large black bag, a new item for me.   It is bulky but lightweight.   Two weeks ago I had bought a hundred dollar ukulele at International Vintage Guitars on Baronne Street in New Orleans.  I cannot seem to get myself to play guitar at home so maybe if I take the uke on bike trips it might inspire me to play in spare moments in a hotel room.  I might learn a new song. 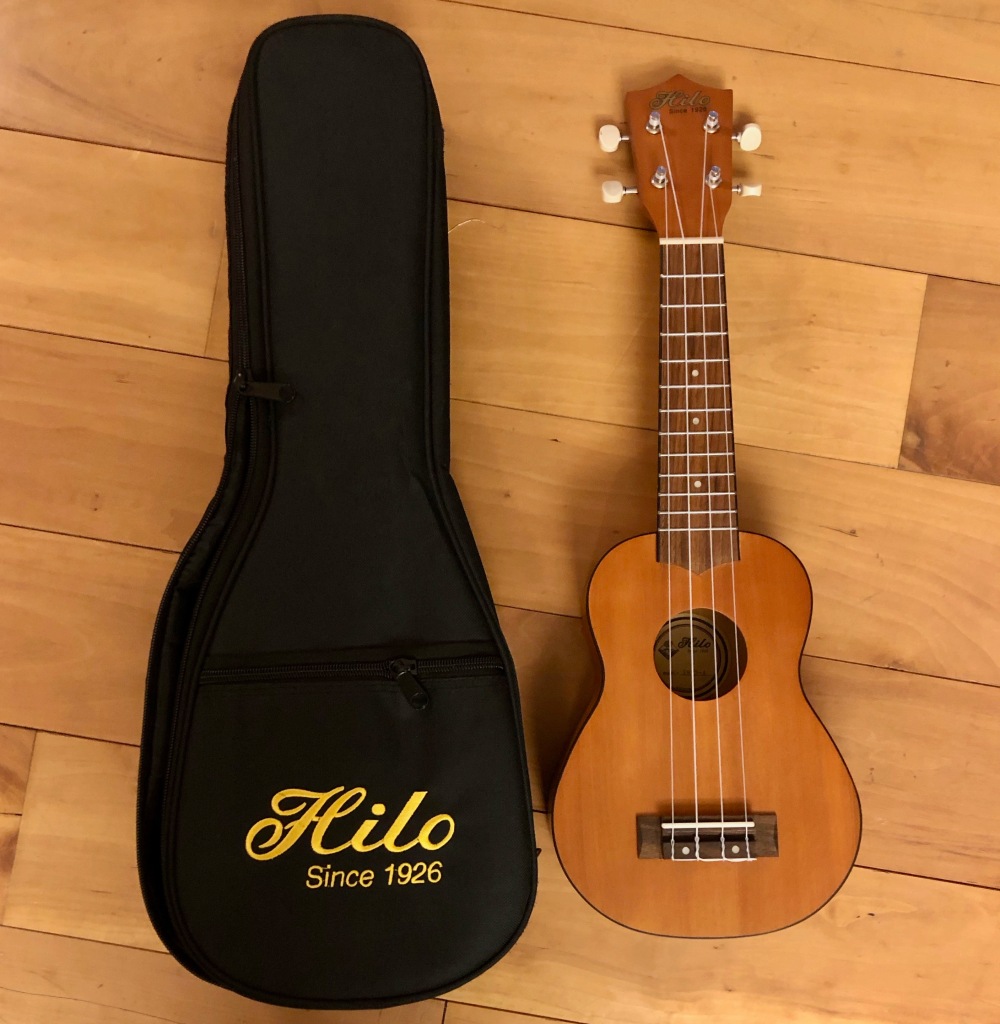 It was just before noon on a Saturday.    This is the map of my bicycle ride for the next two and a half days.

I wanted to get some miles in by bicycle before I had to stop for lunch.   I rode south out of town. 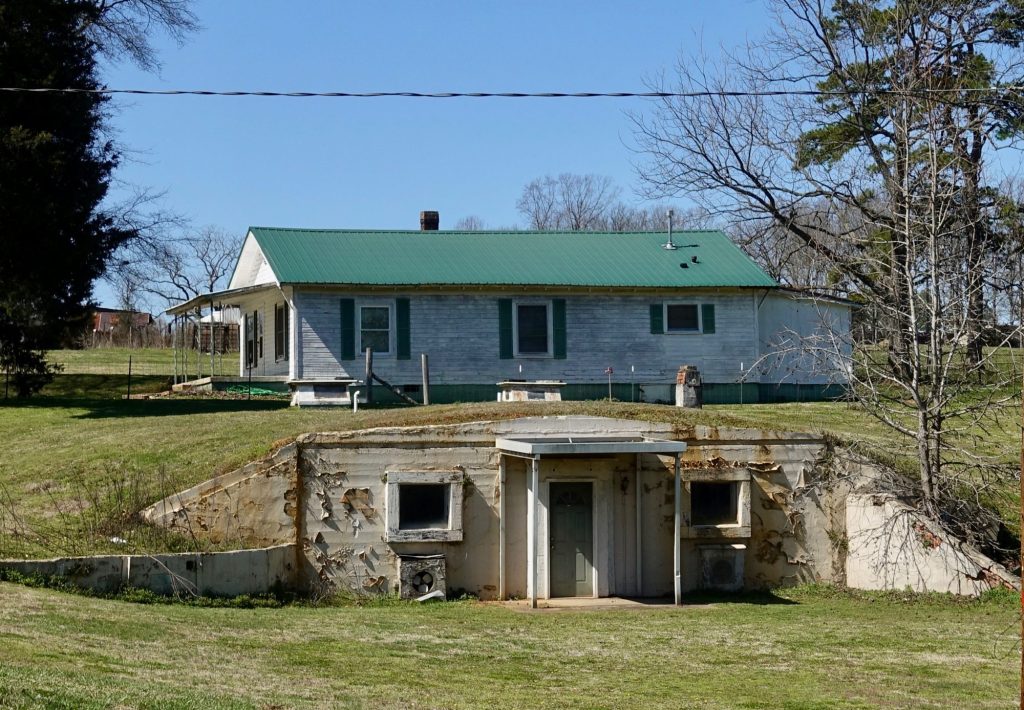 In Boiling Springs NC,  just north of the South Carolina border,  all lunch items at Italian Garden were $ 7.99 including fries. This tiny town is the home of the religious Gardner Webb University.   During lunch I overheard an about nineteen year old fresh faced young man talking to his female companion about how difficult it is to be a Christian today in America.

After lunch I biked out of Boiling Springs.

I passed Boiling Springs Baptist Church, then continued through the countryside across the South Carolina state line.

These flags were in a graveyard outside a country church.

In the late afternoon I rolled into the northern parts of Spartanburg.   I really had expected Spartanburg to be a depressing series of abandoned mills and decaying housing.  Yes, these things existed in places.   But Spartanburg seems to have its act together.   My first stop about a mile from downtown was this attractive former mill converted to housing and shops.  There was a coffee house and I stopped for an almond milk latte.   While sitting there I booked an Airbnb downtown.

After a break I biked further towards downtown.   Spartanburg is a railroad town.  I love watching long trains of double stacked ocean containers.

Just past the railroad tracks was this piece of mid-century modernism, the Congregation B’nai Israel.

Downtown Spartanburg’s one big corporate headquarters is its one really tall building: Denny’s restaurants.   The downtown otherwise seemed quite lively with outdoor bars on this lovely Saturday afternoon.

Cheaper than a hotel the Airbnb was a one bedroom apartment in a 1920’s building in a great location,  just two blocks from Main Street and the restaurants.   I am not picky but this Airbnb failed in the details.  The proprietors had forgotten to put a top sheet in the bed.  When I called them up about it they failed to respond.  The trash can was a plastic grocery bag hanging from a doorknob.  One towel looked suspiciously non-clean.  I have had many Airbnbs with someone’s clothes in the closet, but having her shoes hanging here was a little over the top.  This is atypical of Airbnb and it was disappointing.

I managed to chill for a while in the room and then walked downtown to eat.    The Lime Leaf Thai restaurant is clearly one of the better places in town.   They were full on a Saturday night but I got a seat at the bar. 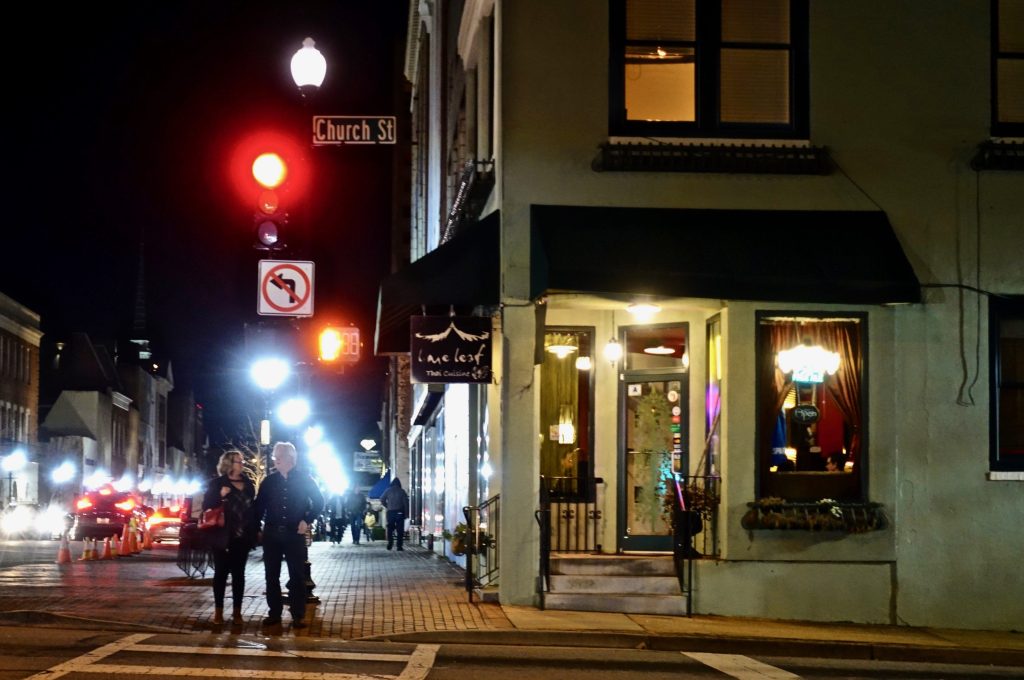 The food was delicious.   I ordered the less challenging stuff, just pad Thai with a first course of tom yum soup.

Walking back to the apartment in the dark I was impressed that some of the upper floors had their lights on.  Do people actually live above the storefronts in downtown Spartanburg? 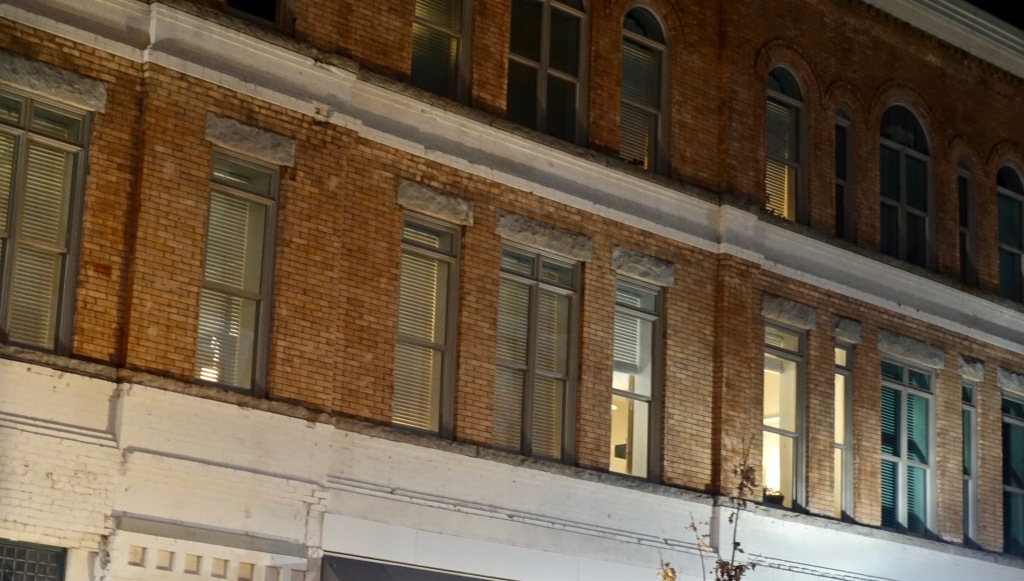 The other restaurants downtown looked crowded. 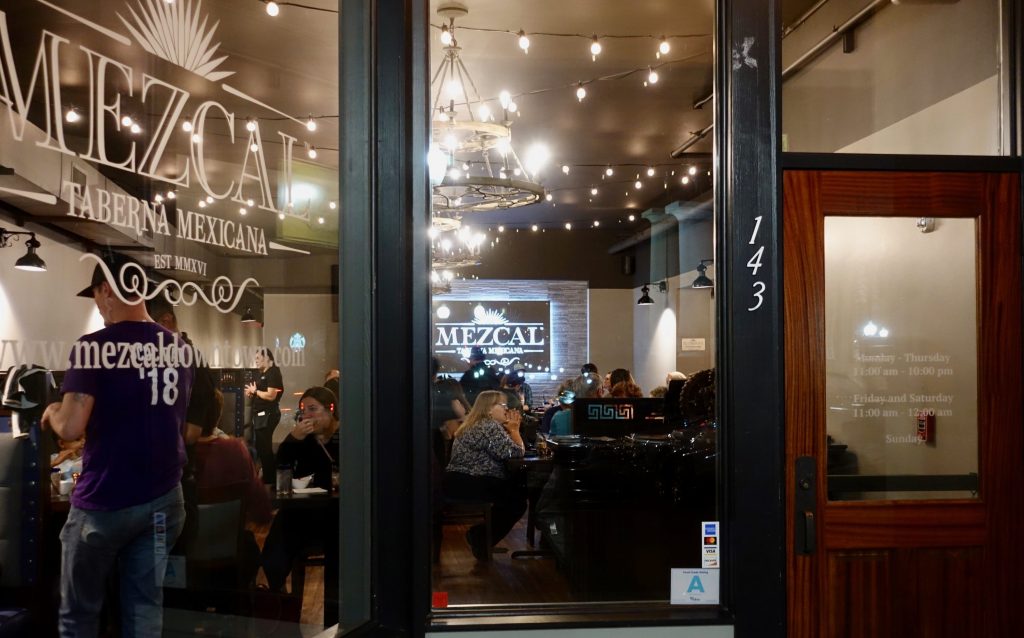 The next morning there are several locally owned coffee houses but at 7:30 AM on a Sunday morning the only one open was Starbucks.

The forty miles by bicycle to Greenville SC had very little farmland.   Instead there are a string of small textile towns; some in better shape than others.

I have learned that in textile lingo a factory is called a mill, not a factory.  One such tiny mill town was Lyman SC, thirteen miles from Spartanburg.   (same name as my frequent bike trip companion).  Many of these vacant mills have recently been rapidly dismembered for the value of their used brick.   All that was left of the Lyman SC mill is the reinforced concrete and smokestacks.

The working class housing surrounding the mill remains, as does the Lyman Cafe.

I stopped for an early lunch.   Fox News played in the background.

A buffet line is typical in Southern restaurants like this.   My lunch was disappointing, some of the stuff seemed like it had sat in the buffet too long.   I should have ordered a la carte; lots of people were doing that.

Most of the remaining twenty-something miles to Greenville were on an older highway, a road less important now but that clearly was a principal highway seventy-five years ago, with the remains of prewar gas stations.   This one included the Mercury version of the Ford Pinto; the Bobcat, with four flat tires. 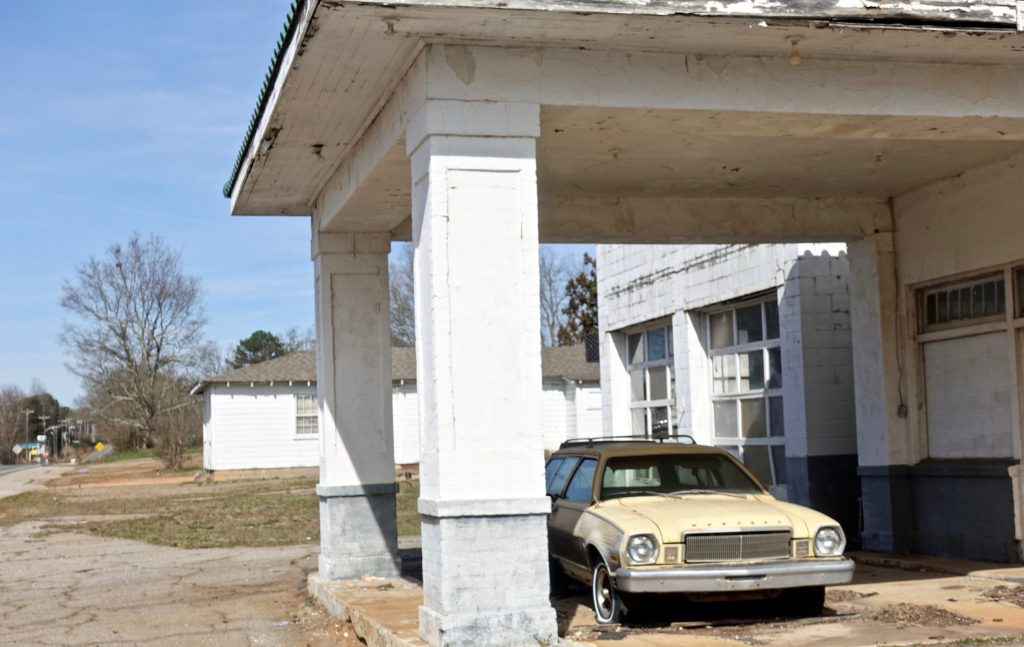 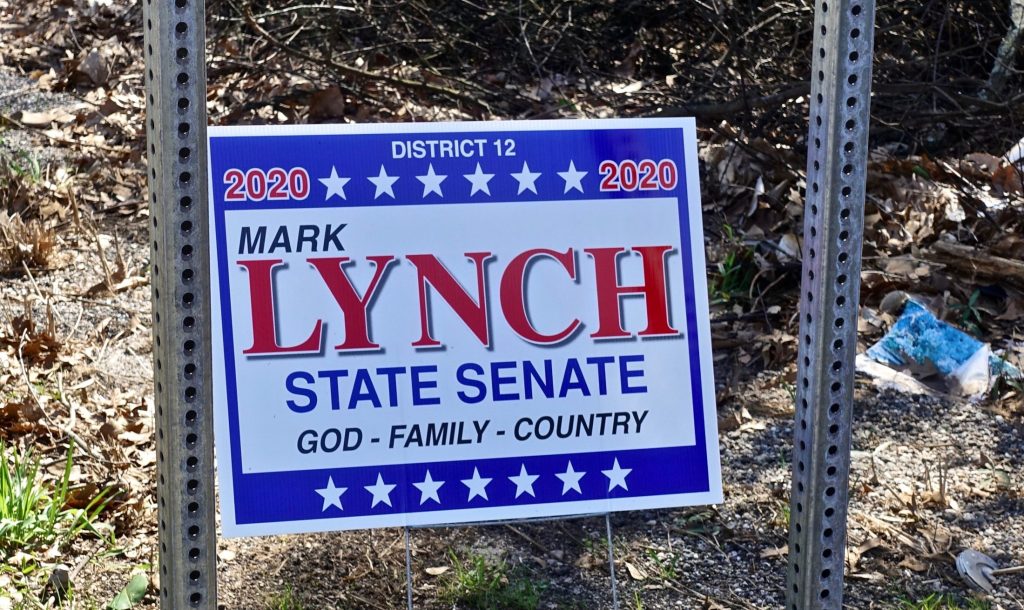 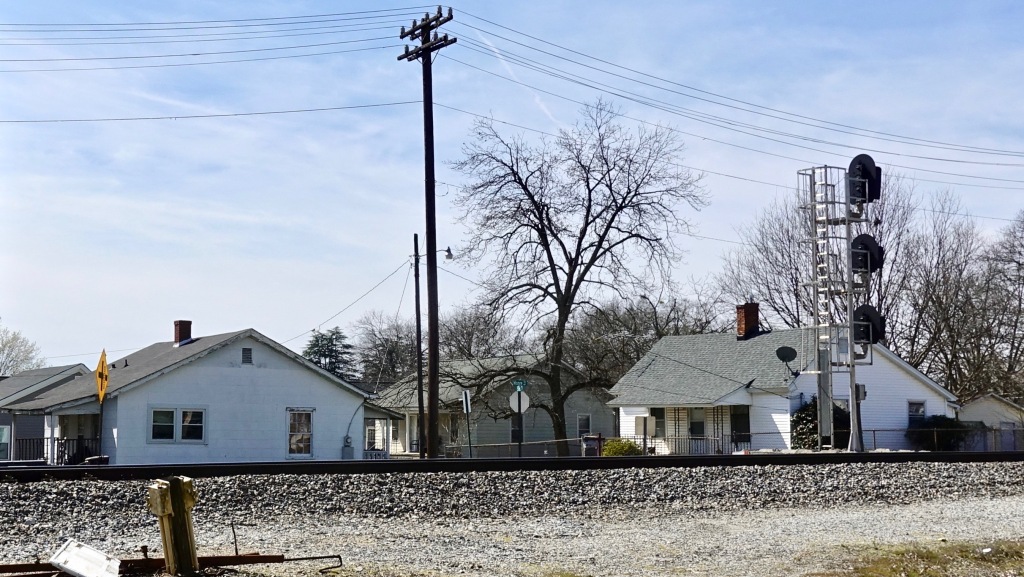 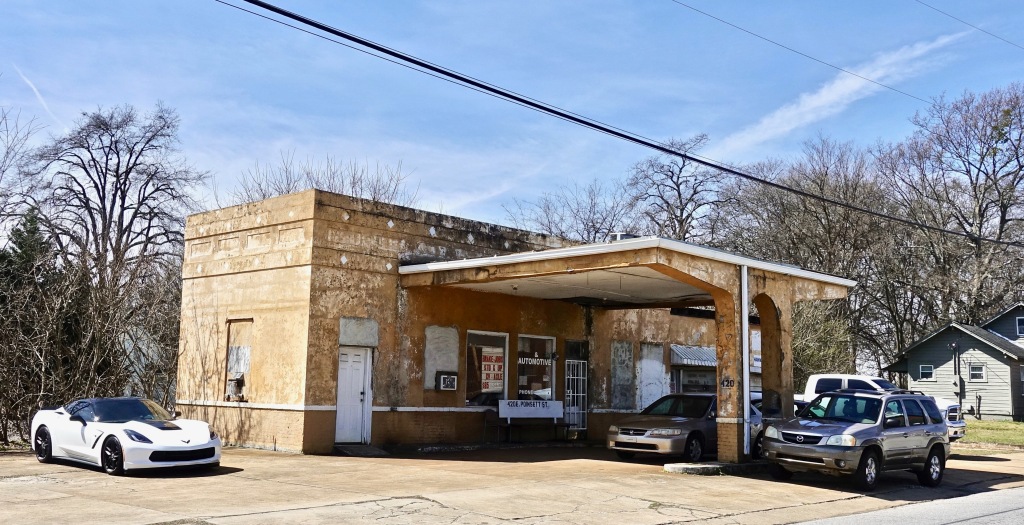 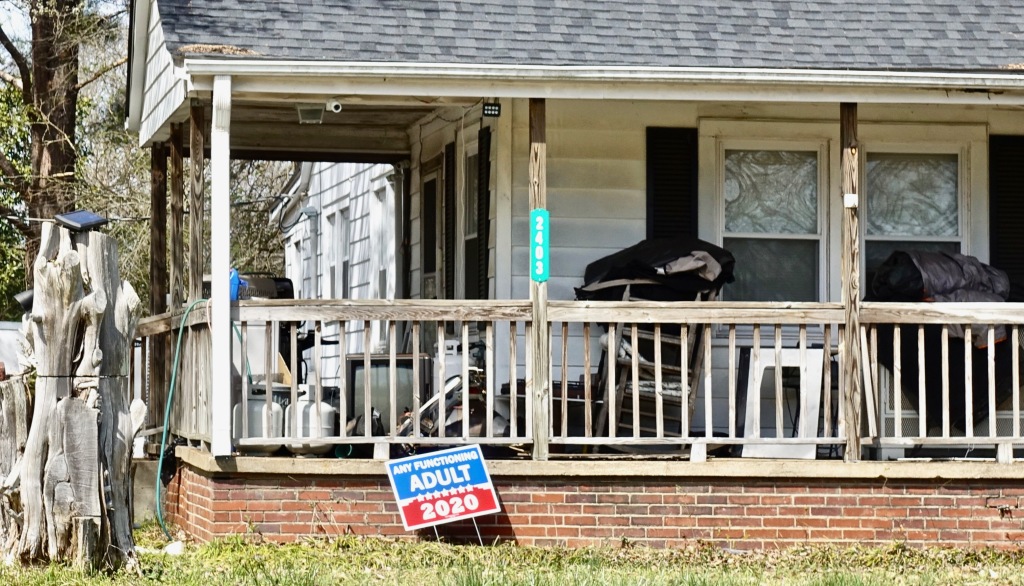 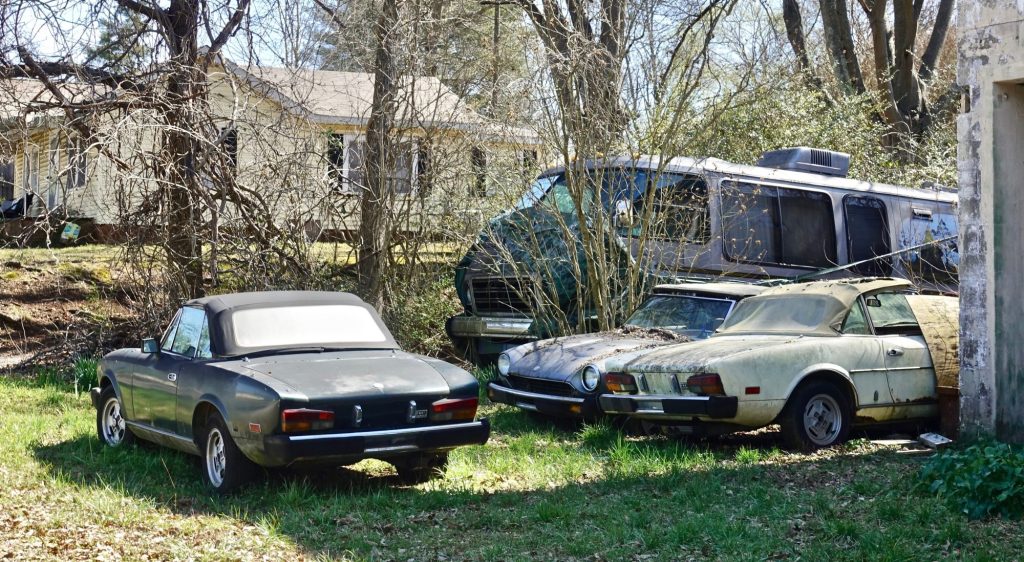 Approaching Greenville by bicycle from the northeast the streets meander through the steep slopes that were the source of the water power for the textile industry.   Looking from a churchyard, even from a distance downtown Greenville is clearly booming, new construction was everywhere. 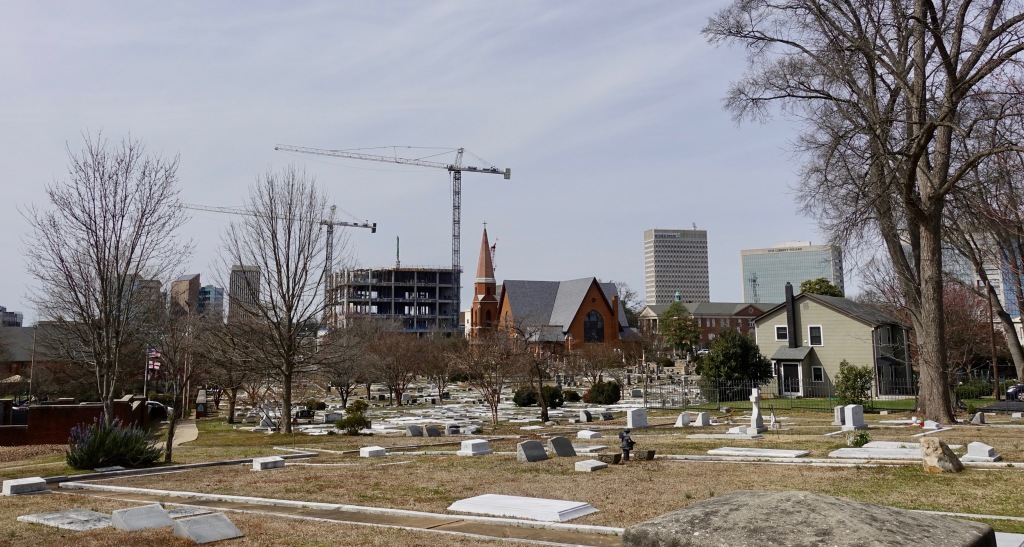 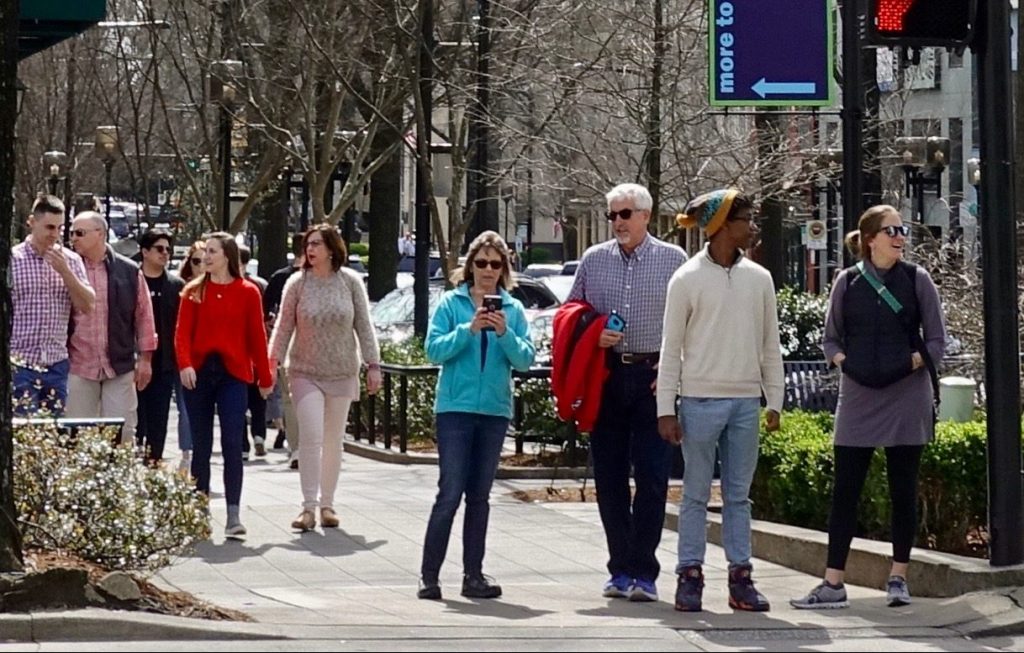 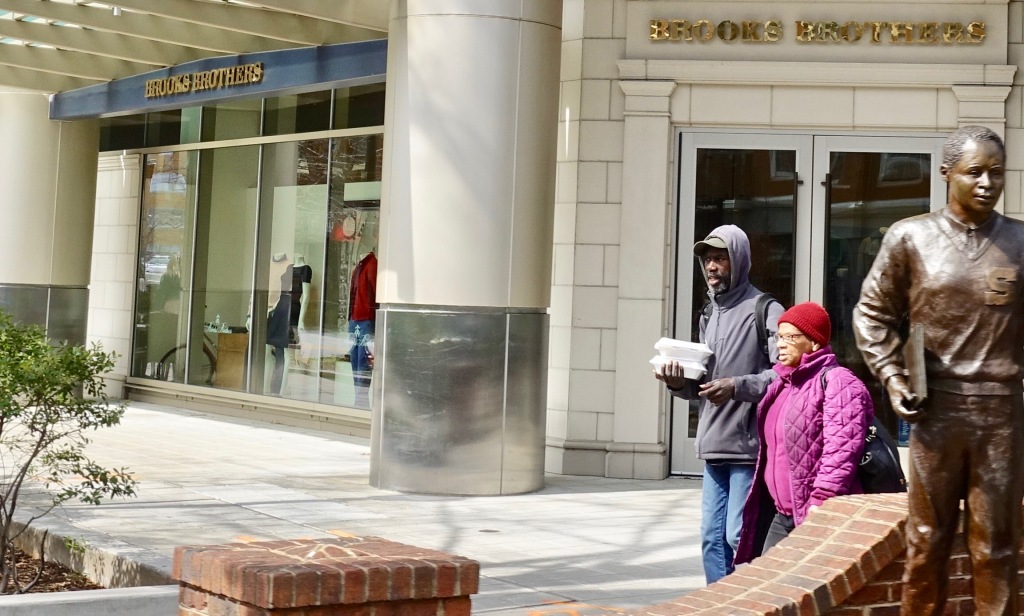 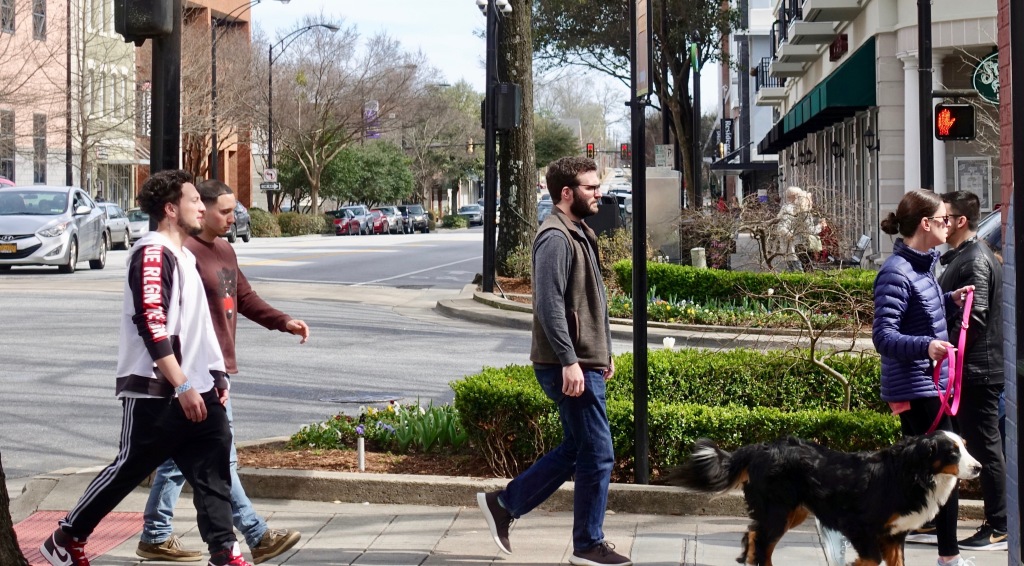 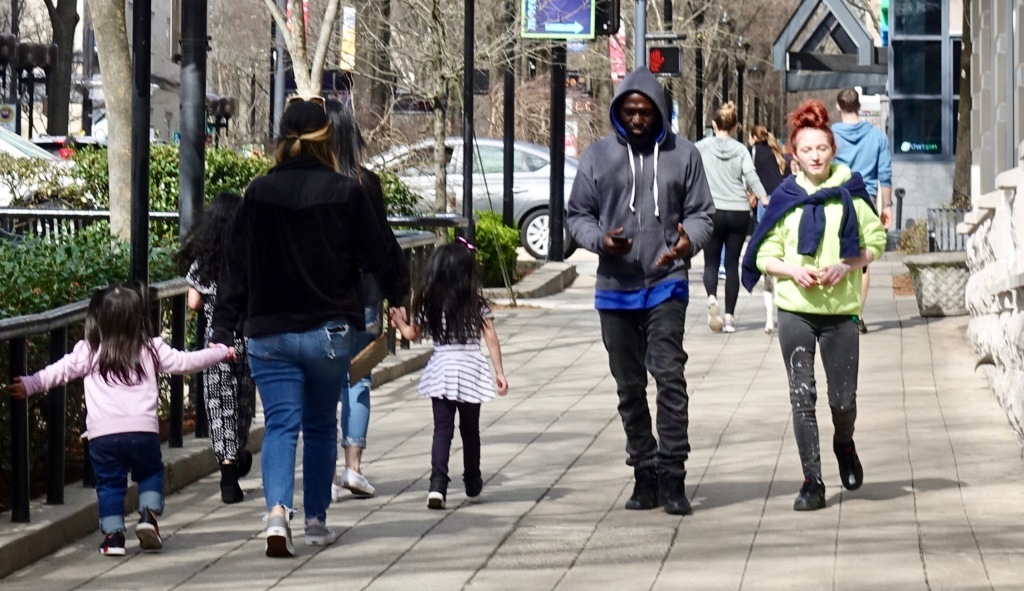 I found a coffee shop and sat down with a latte.  After the dirty feeling of the Airbnb the previous night I tossed caution aside and booked a modern room at a Springhill Suites Marriott just around the corner.  It felt good to chill in a clean environment.

Later on I walked just across the street from the hotel to a locally owned brewery that occupied part of the space in a former car dealership.   Construction cranes rose in the distance.

A middle aged woman next to me at the bar told me she was leaving this brewery to drive twenty miles to what she called a biker bar; not a biker bar for motorcycles but a biker bar for bicyclists: mountain bikers covered in mud, as she described.

I drank a delicious cloudy IPA.  Afterward I walked over a few blocks over to what had been described online as one of Greenville’s best restaurants: Soby’s; it boasts of “reimagined Southern fare.”

I am not sure how Southern friend calamari is but it was delicious, as was the second course; roasted salmon on top of sweet potatoes and collard greens.

The next morning I biked north through Greenville and passed this attractive mid-century modern post office.

The Swamp Rabbit Trail originates near downtown Greenville and as a rail-to-trail heads thirteen miles straight north before abruptly ending.   I did this ride as and up-and-back.

I passed more another repurposed mill. 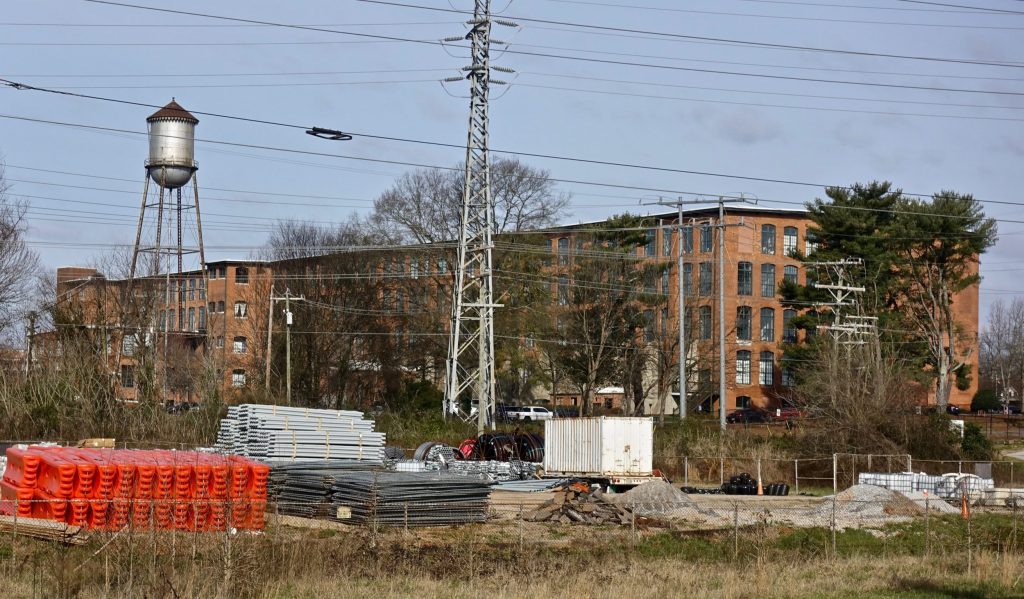 I biked to the end of the trail then turned around and rode back to Greenville.   I had made reservation for an Enterprise rental car.   I drove the hour and a half back north to Shelby NC, back to my car at the Shelby Walmart.   Before picking up my car I looped around downtown Shelby by bicycle.  Shelby is the seat of North Carolina’s Cleveland County.  For years I have thought that Shelby NC was the most commercially sprawled of any city or town I had ever visited.   Essentially every retail business seemed to have moved out to the US-74 Bypass, not just Walmart.  The town seemed to be an afterthought.  On this most recent visit Shelby looks a little better; it even now has a brewery!