The Coronavirus Diaries, Part Five: To Durham and back, March 29, 2020

I was going to take a bicycle ride to Durham without touching anyone or anything and without getting within twenty feet of a person, unless I happened to be passing that person at twenty miles an hour.

I keep my bicycles on the commercial parking level of our building Greenbridge.   Tootie and I have two cars, one inherited from her late mother, the other inherited from MY late mother.   We own only one indoor parking space so we are constantly moving the other car around, usually to a space on the street alongside the building.    The coronavirus has caused the law firm in our building to work remotely, so all their parking spaces sit empty.  When I walked down to get my bicycle for the trip to Durham our car sat comfortably indoors. 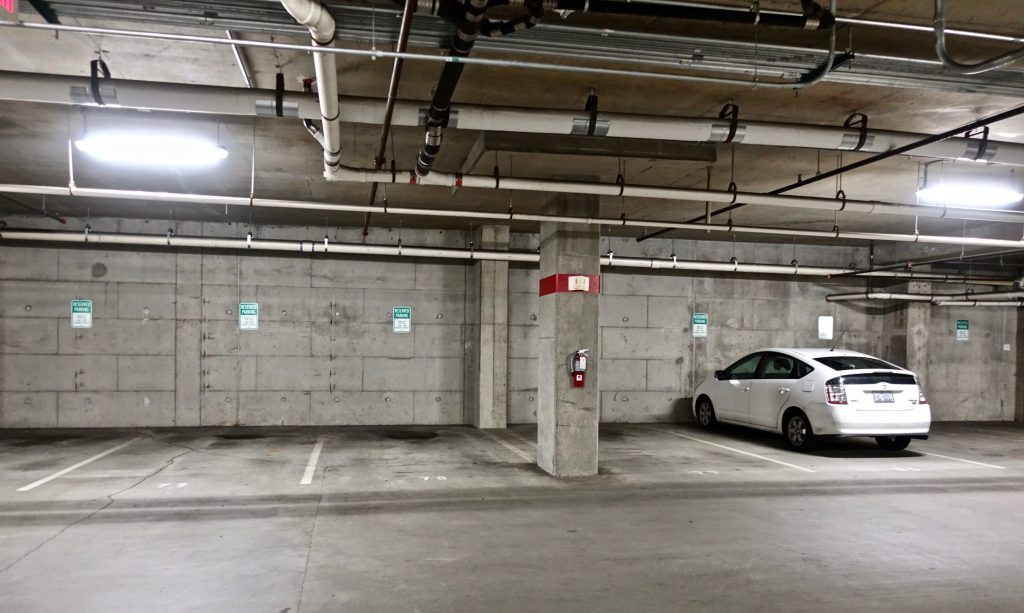 I got the bicycle and was prepared to leave but I realized I had forgotten to fill my water bottle so I took the elevator back up to our apartment and left the bicycle in the hallway. 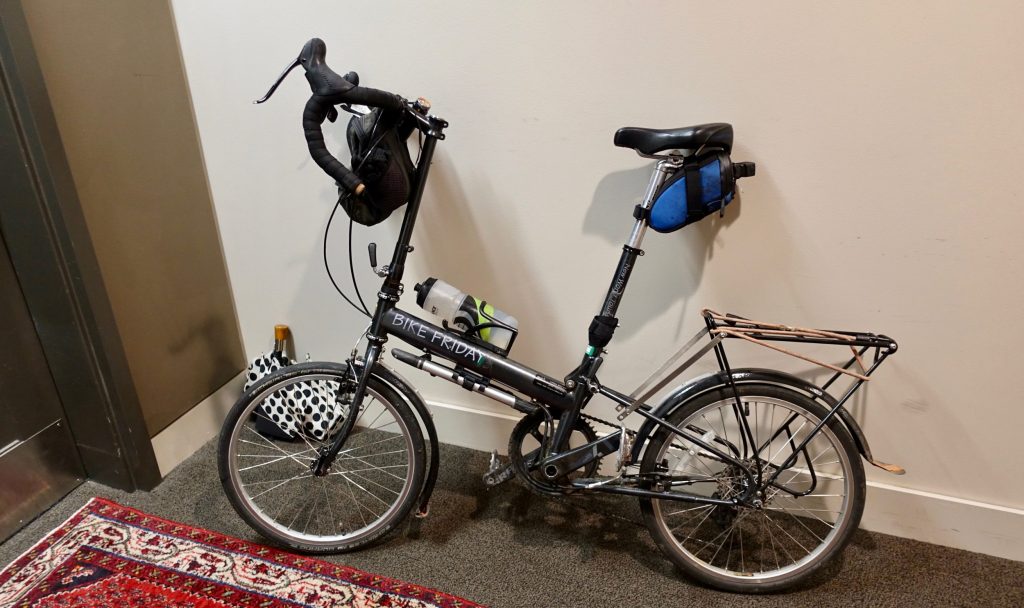 Our building Greenbridge looks different on each side. 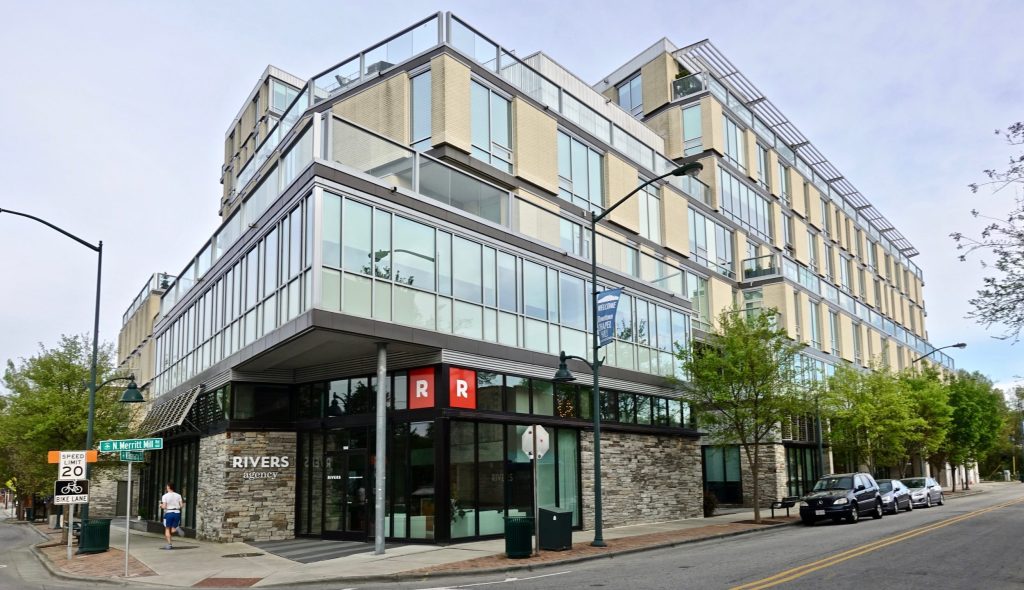 I bicycled the mile down the road towards the University of North Carolina campus.  Normally I would bicycle on side streets but now Chapel Hill’s principal street Franklin Street was totally empty on a Sunday morning. 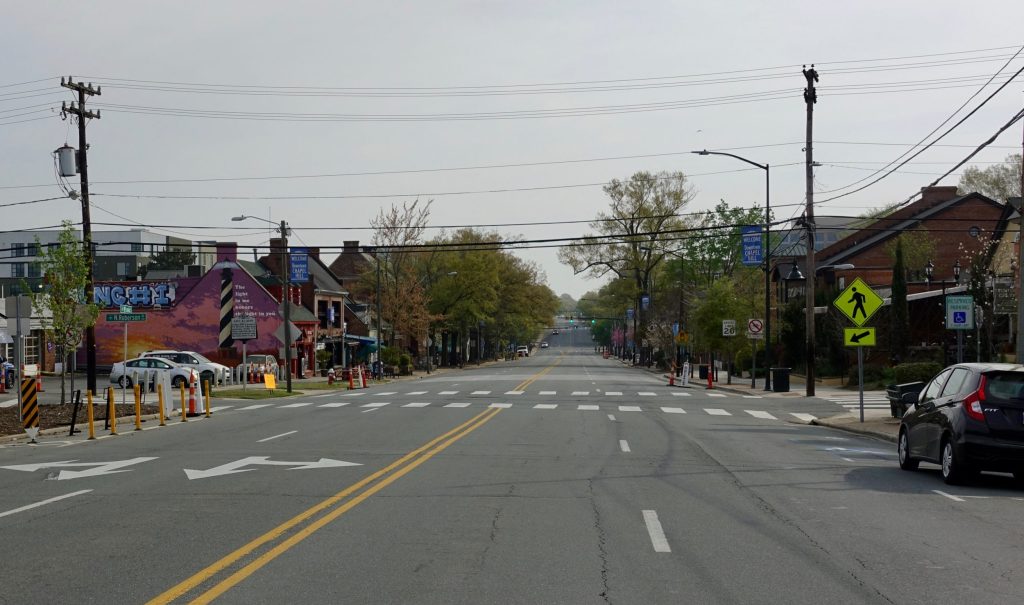 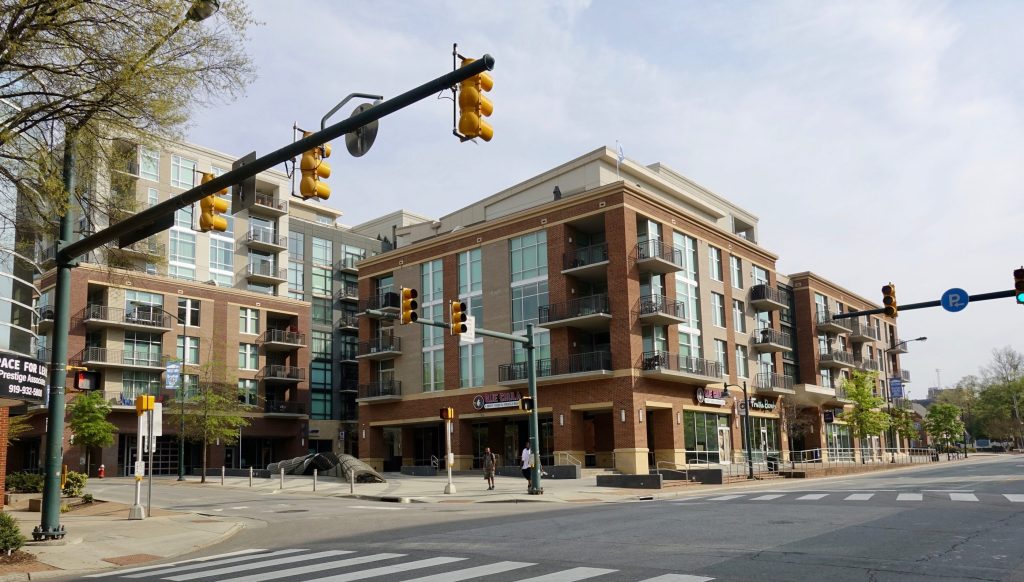 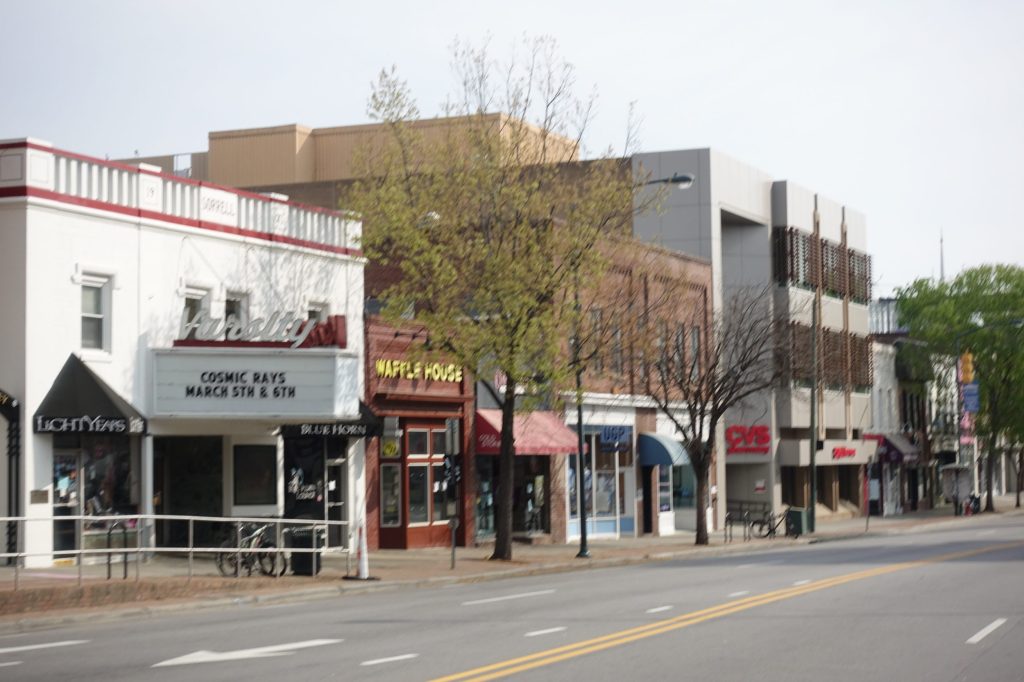 I turned the bicycle to cut through the UNC campus.   Old East from 1793 is the oldest state university building in the USA. 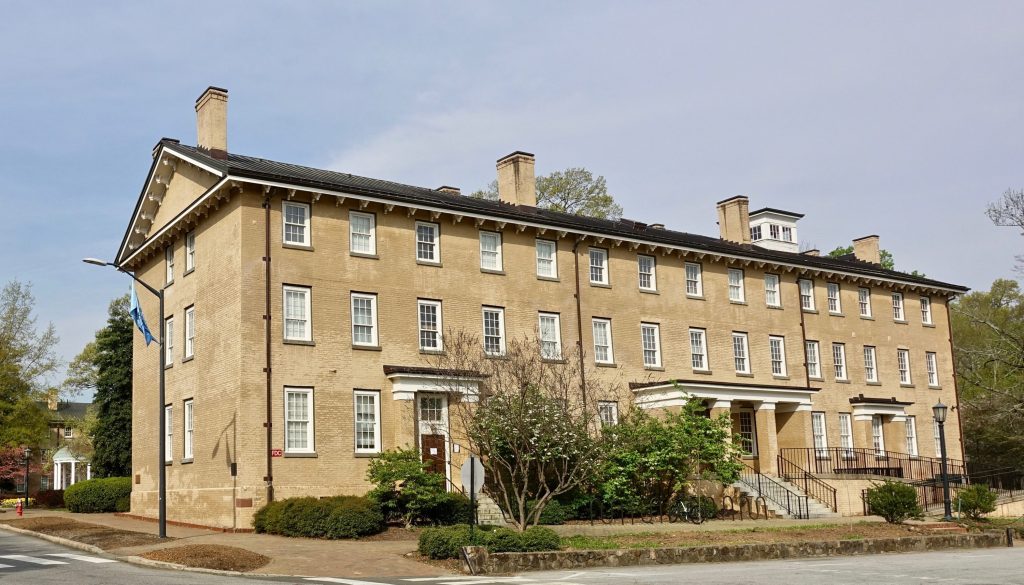 One building down from Old East is Davie Hall, from 1968.   Everyone probably hates this building so I will say I really like it. 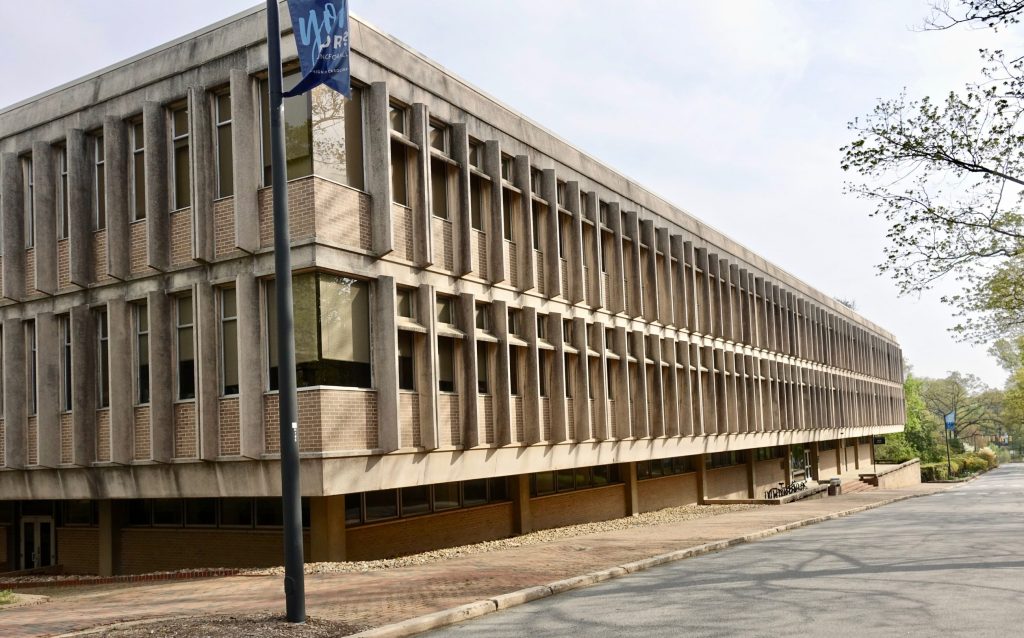 A quarter mile from the center of campus is Gimghoul Castle, the clubhouse of a secret UNC society.   Some say the building is haunted. 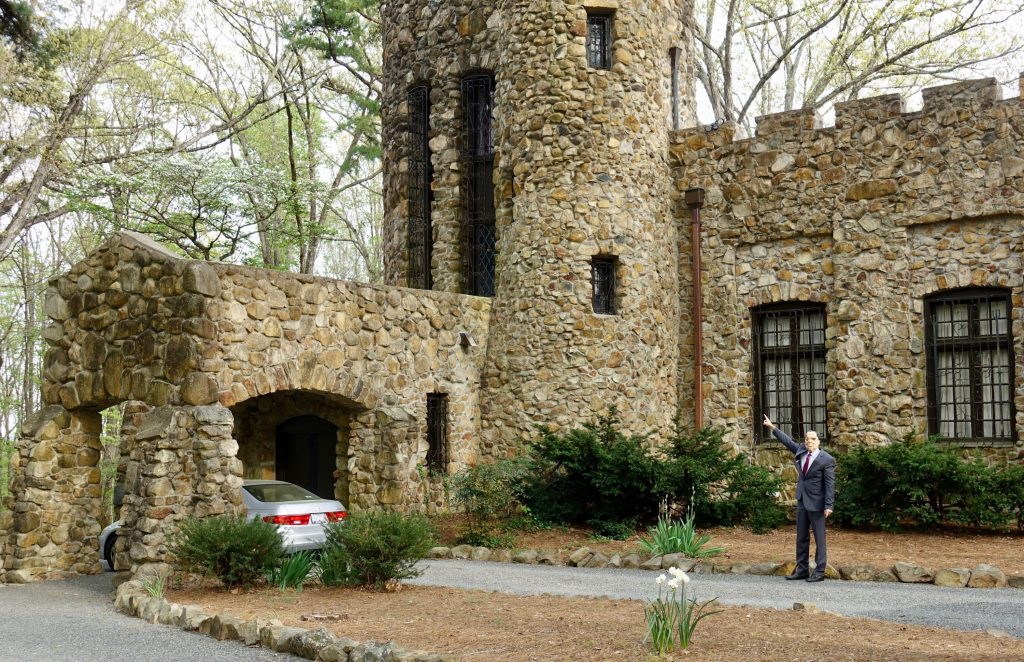 The bike ride to downtown Durham from UNC Chapel Hill is between twelve and sixteen miles each way, depending on the route.    This morning I took the longer way.  I starts with the bike path along state route 54, I took this photo as I whizzed by the woman as we were going in opposite directions. 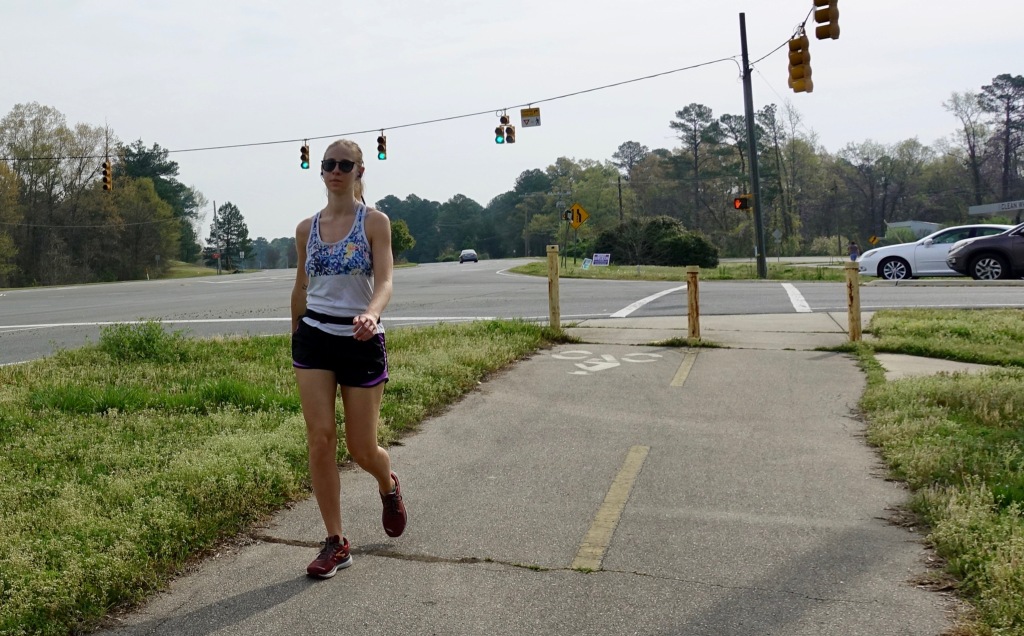 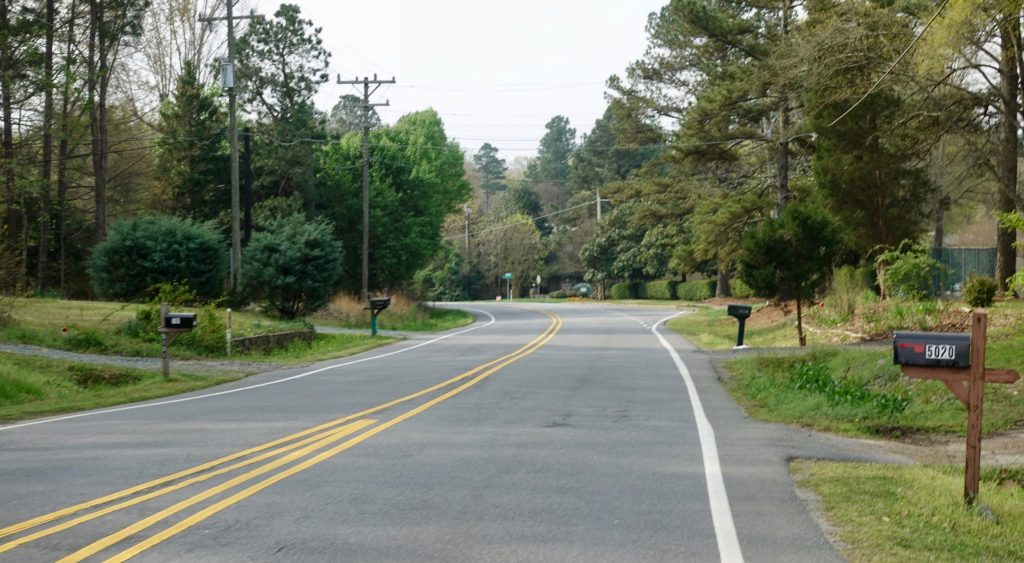 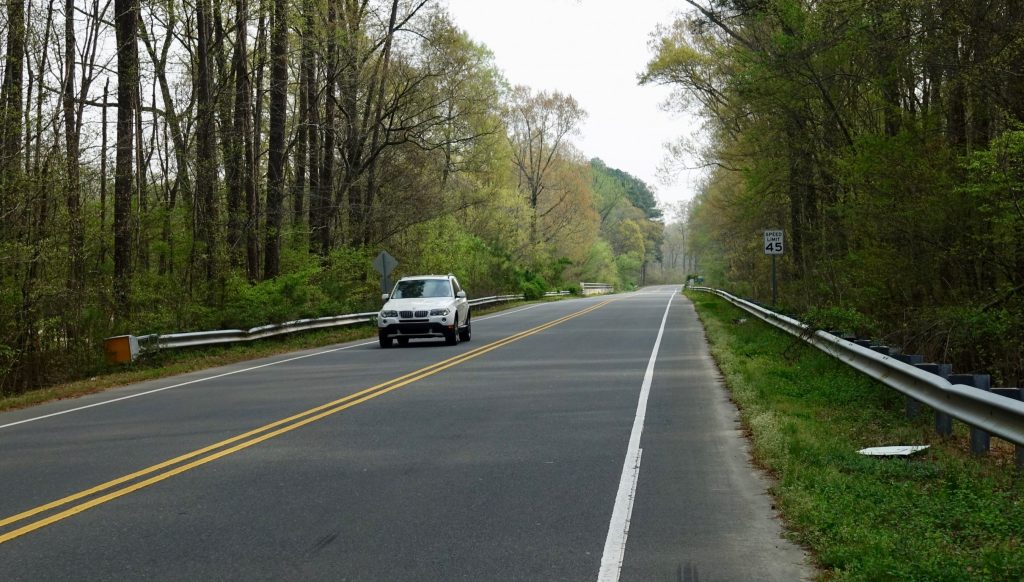 then the America Tobacco Trail.    There were families walking on the trail but I did not see any socializing between any of these people.  I wizzed by. 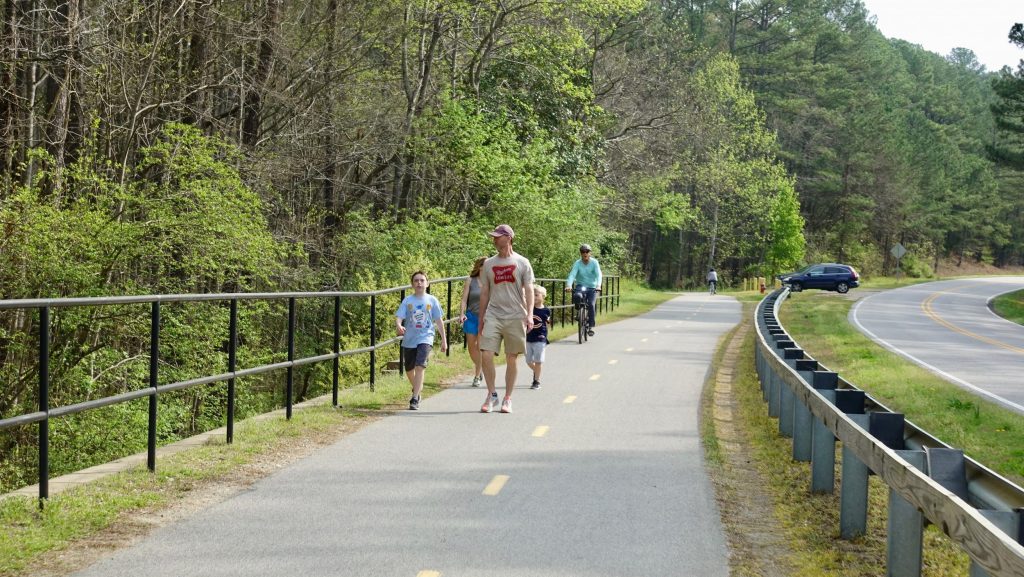 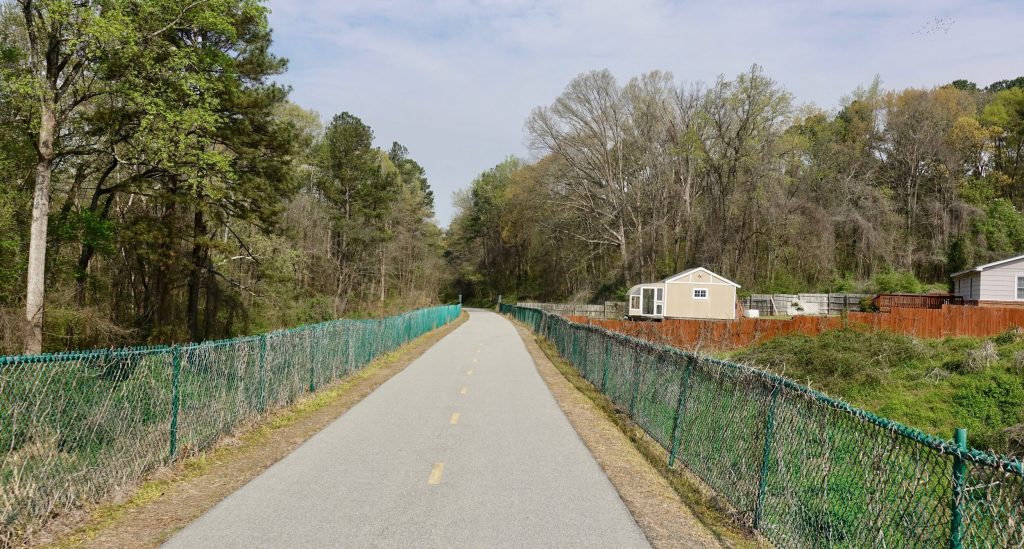 There were no people on the streets when I cruised through downtown Durham. 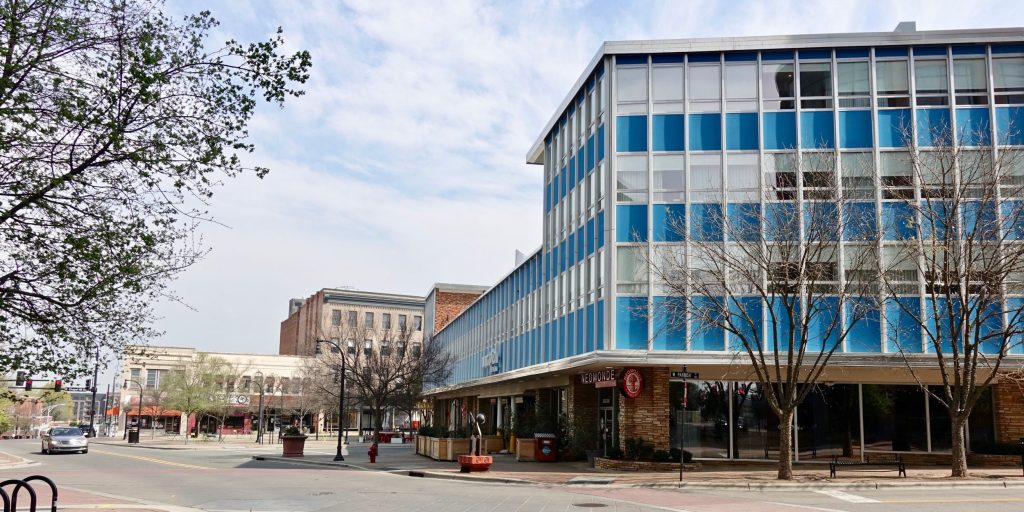 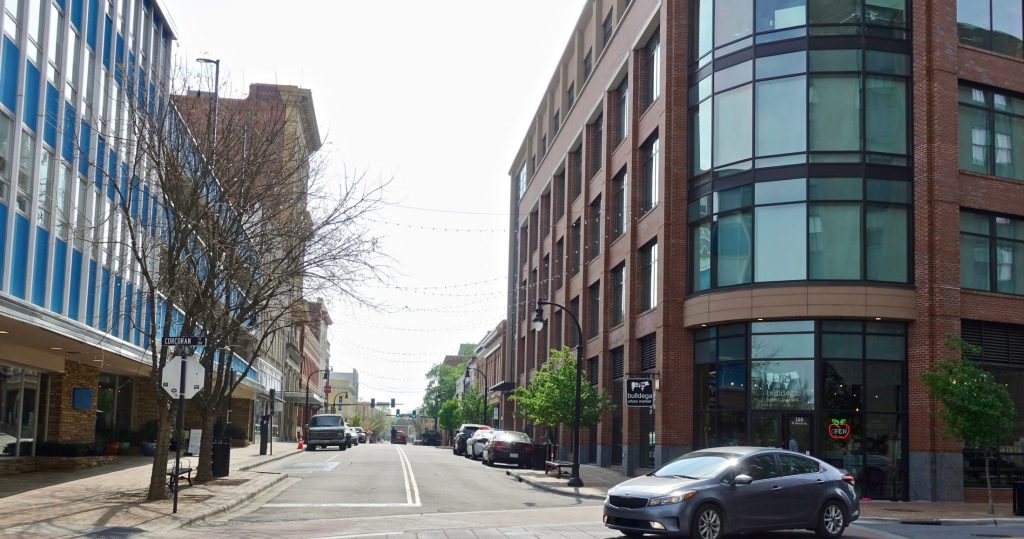 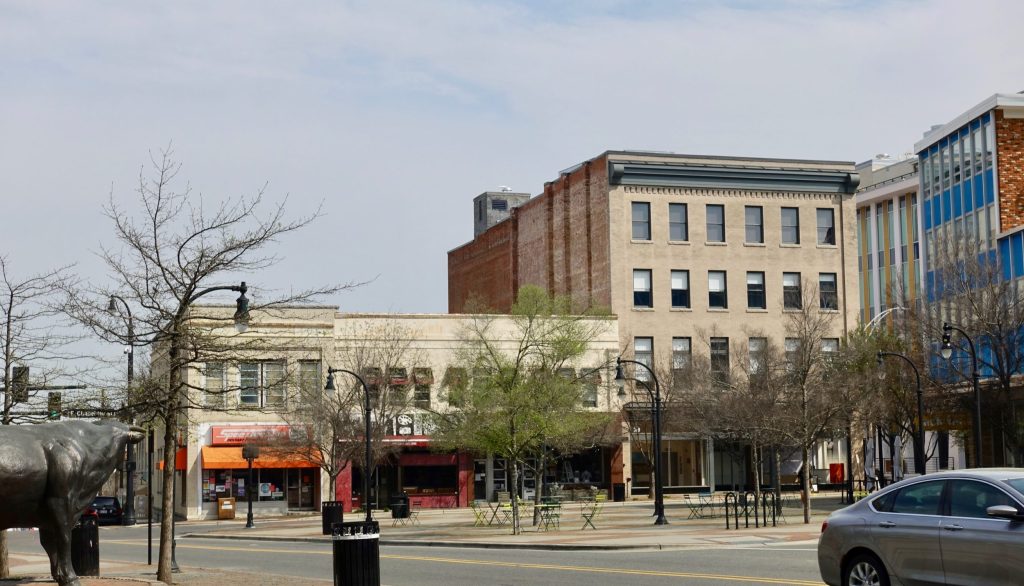 My older son Sam lives in Vietnam.   His brother and my son Jack owns a house one mile the other side of downtown Durham in an area called Duke Park.   I bicycled over to Jack’s house and stood at the street and talked with him at a distance. 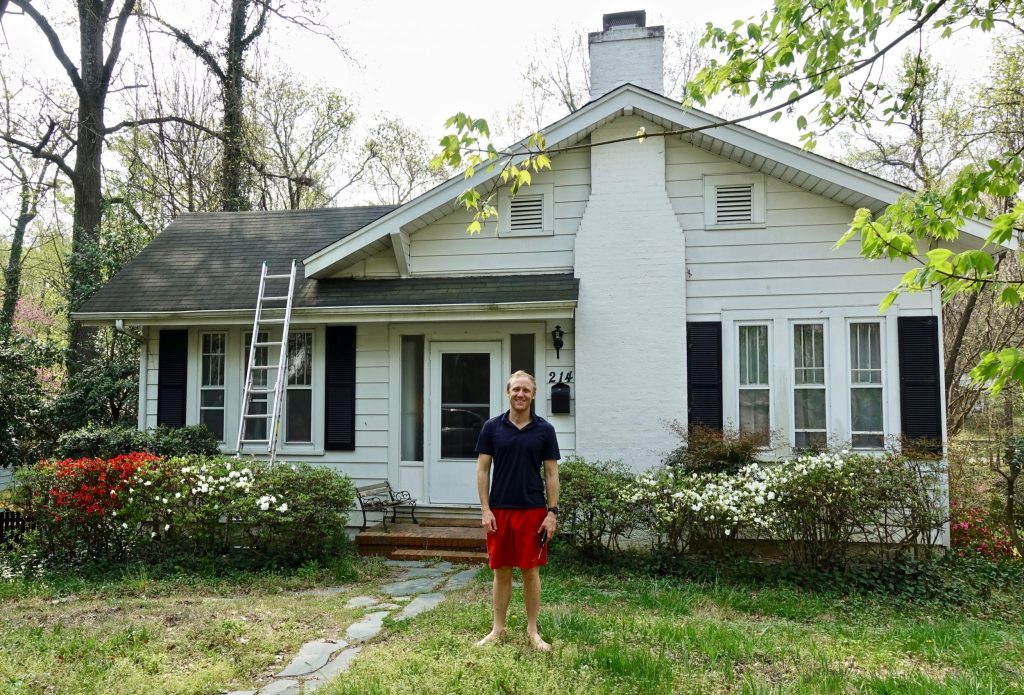 I turned around and bicycled back to Chapel Hill, this time on the shorter route.   I went again through downtown Durham.   Almost all these apartments have been built in the past two years. 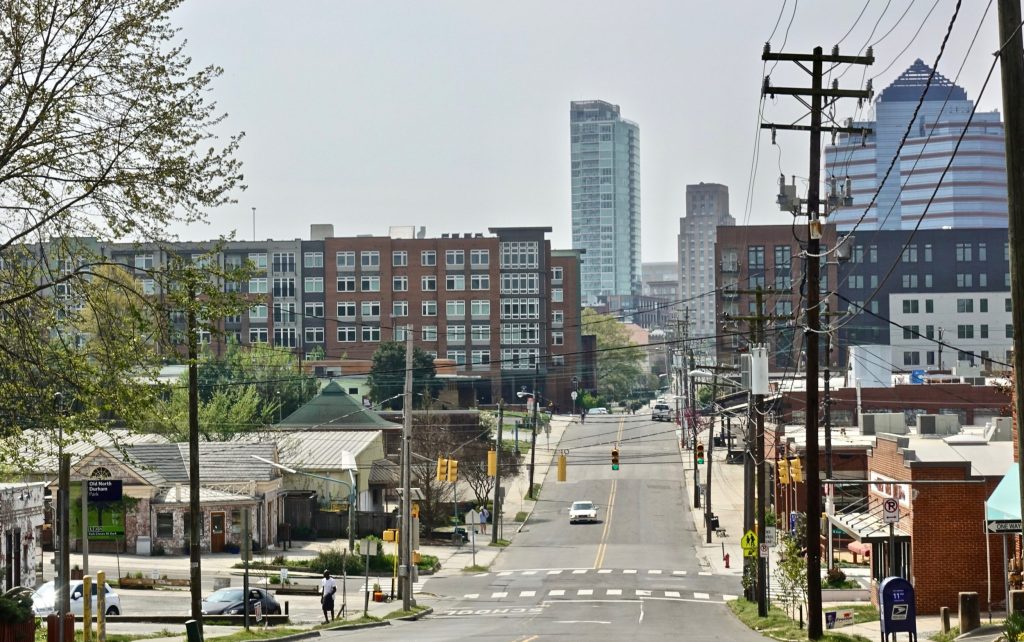 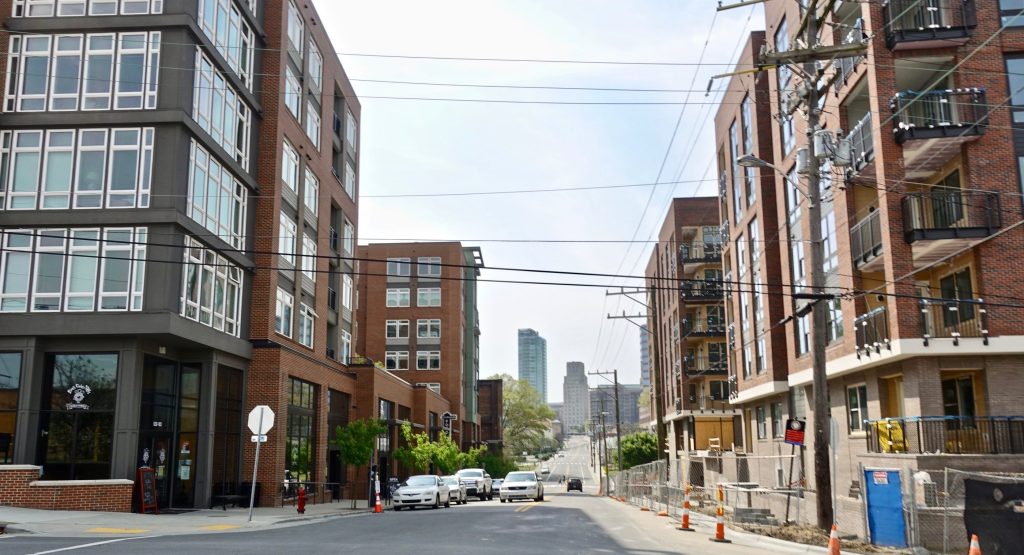 The bike ride home to Chapel Hill took about an hour and a half.