About two weeks ago a friend emailed and asked if I could do my next bike ride to Chase City VA and document it.   This was a first.  How could I refuse?  He is an old friend and has been an enthusiastic reader of my blog.  He really wanted to read about Chase City.  It helped that Chase City is not too far from my home in Chapel Hill NC.

I have known Tom since we were five years old.   As teenagers we did all sorts of stuff including extensive bike rides.  Later, Tom was a high school teacher on an American military base in Germany for thirty years until his retirement last year.   He continues to live in Europe in a rural area where he and his wife can keep their own horses.

Tom and I grew up about a mile apart in Virginia Beach; his father was a dentist; his mother a housewife.  Both Tom’s parents were originally from Chase City VA and both his parent’s families went back many generations in Chase City.  When I visited Tom’s house in Virginia Beach as a child his parent’s talk frequently was about Chase City.  Other than Tom I do not know anyone who knows anything about Chase City VA; I had otherwise never heard of the place.

Chase City is in the heart of a region of Virginia called Southside.   With the exception of a few areas in the mountains Southside is the poorest and most remote part of Virginia.  After college in the late 1970’s both Tom and his older sister separately moved to Chase City and its environs.  Tom lasted five years teaching at minimal pay in a middle school before he quit to take the Germany job.   He described life for a single guy in Clarksville VA as bleak and hopeless.   His sister lasted much longer living in Chase City but moved to Charlottesville when she and her husband’s daughters were entering high school.   The consensus was that Chase City was just too remote.

Chase City (population 2,500)  is indeed remote.   The closest major cities are Richmond VA one hundred miles to the north and Durham NC seventy miles to the south.   Chase City is not on any major highway.   I started my bike ride in Clarksville VA (population 1,100) is seventeen miles south of Chase City.

During this coronavirus pandemic I do my bicycle rides so I do not have to physically get near anyone.   I bring my own food and water.  The summer had arrived; it was going up to ninety degrees this day.  My ride would have to start early to beat the heat.   I left our Chapel Hill apartment at 5:45 AM on a Sunday morning for the 75 minute drive to Clarksville VA.    At 7:00 AM I parked our car at a Hardee’s on the northern fringe of Clarksville, just three miles north of the North Carolina line. 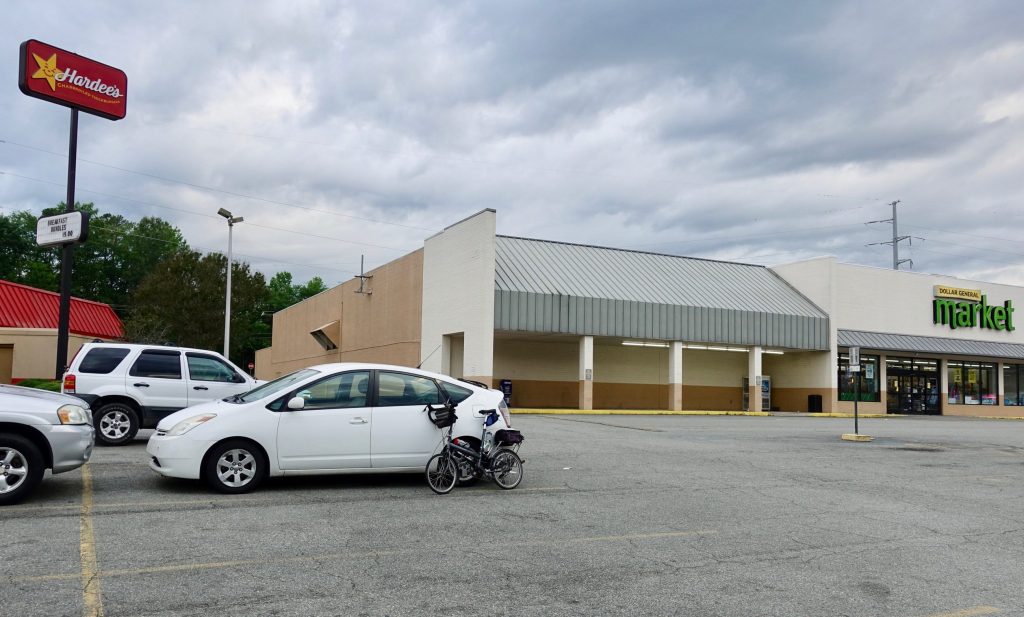 Here is the bicycle ride I took.

I first biked through central Clarksville. 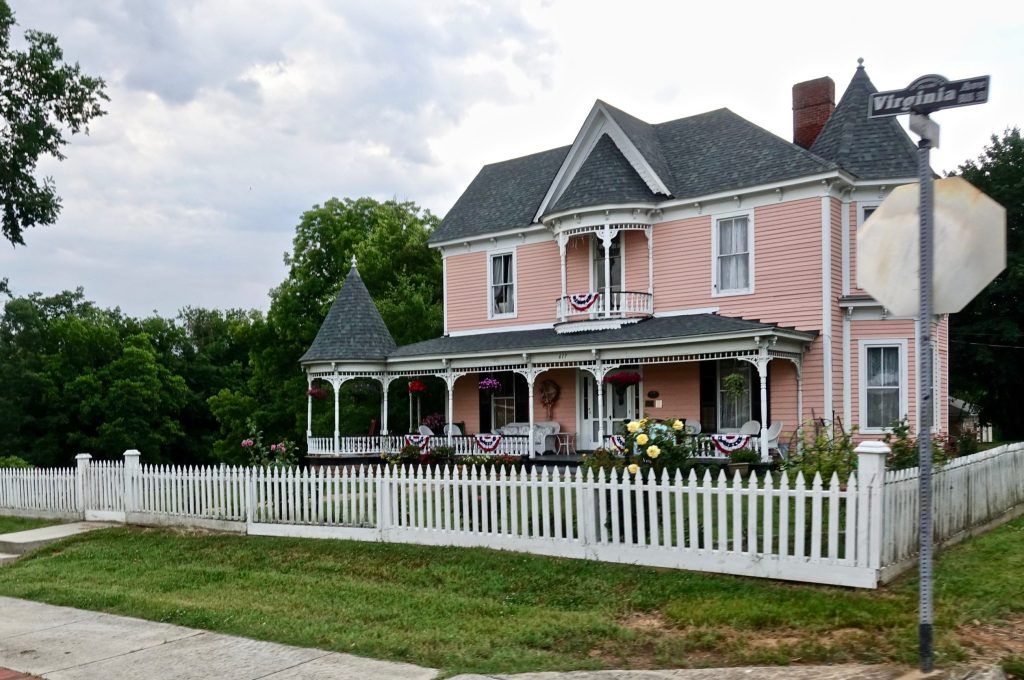 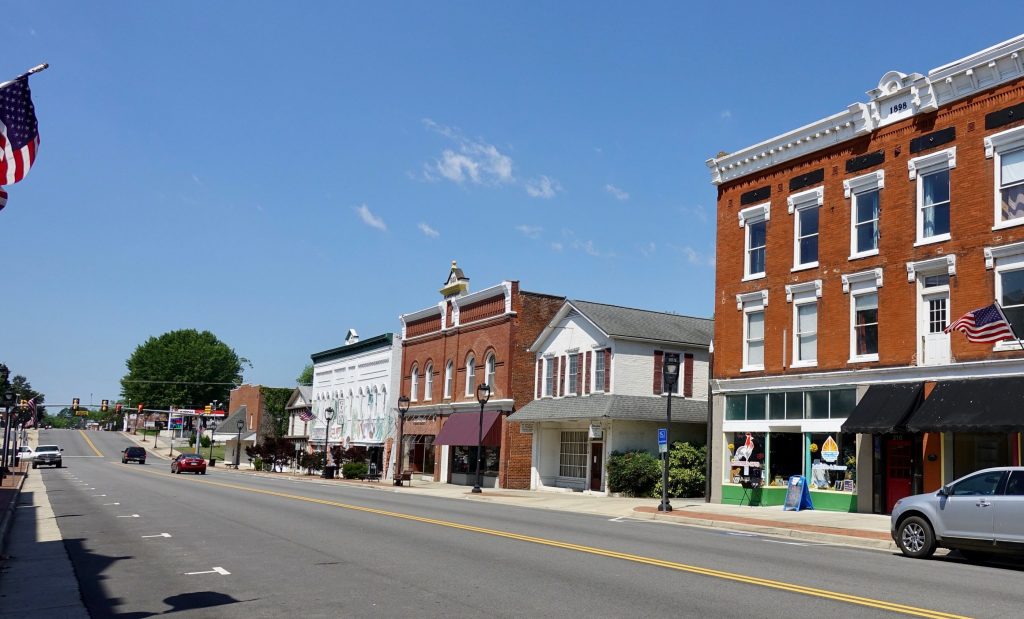 Virginia used to have matching state liquor stores all over the state.   They had glass bricks and double doors.  As a small child in the early 1960’s I used to ride with my father to the liquor store on Pacific Avenue in Virginia Beach.  In his Madmenesque persona he went to buy supplies for his nightly scotch and soda.  The store in Virginia Beach is long gone but here in Clarksville this must be one of the few of its type left. 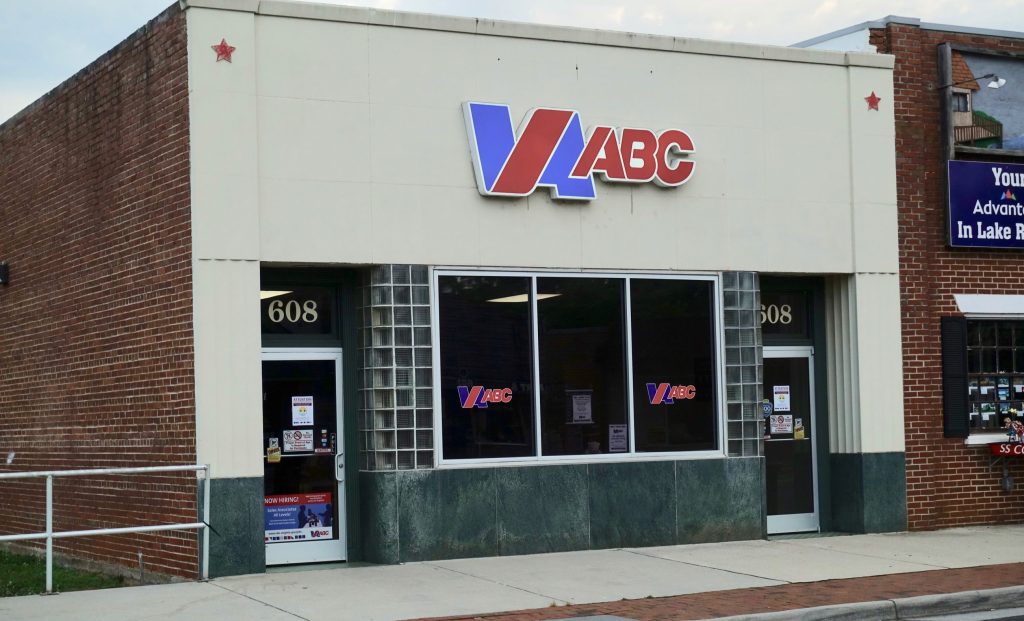 The one attraction that seems to bring people and money to otherwise remote Clarksville is Kerr Lake.   Constructed 1947-52 by damming the Roanoke River, the lake straddles the North Carolina / Virginia Line and comes right up to downtown Clarksville.

I biked on US-15 as it crosses the lake. 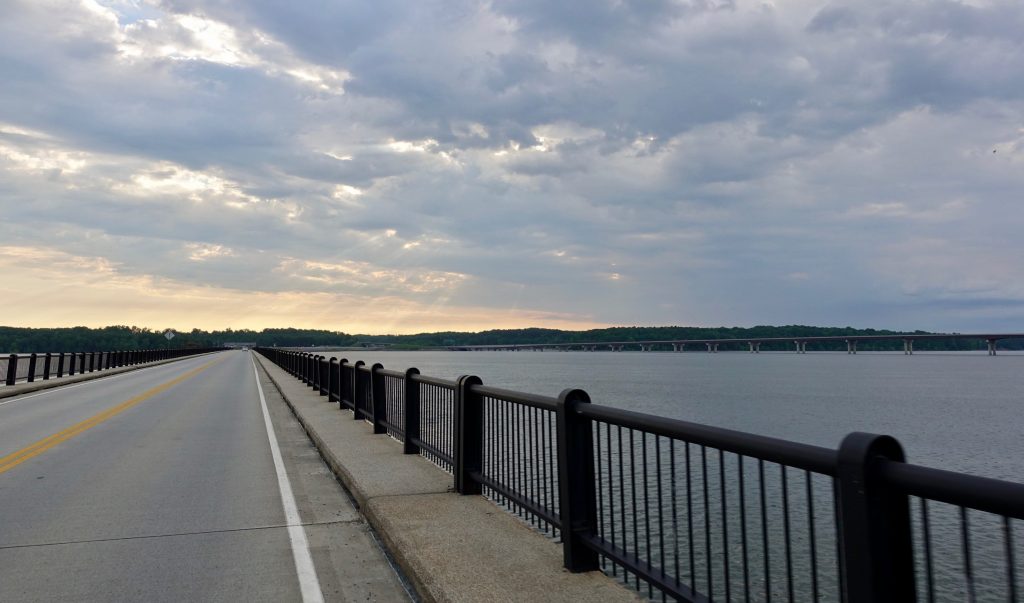 I bicycled toward Chase City, first on US-15 then on state route 49.

I did not see any tobacco growing but there are a lot of old tobacco barns out here. 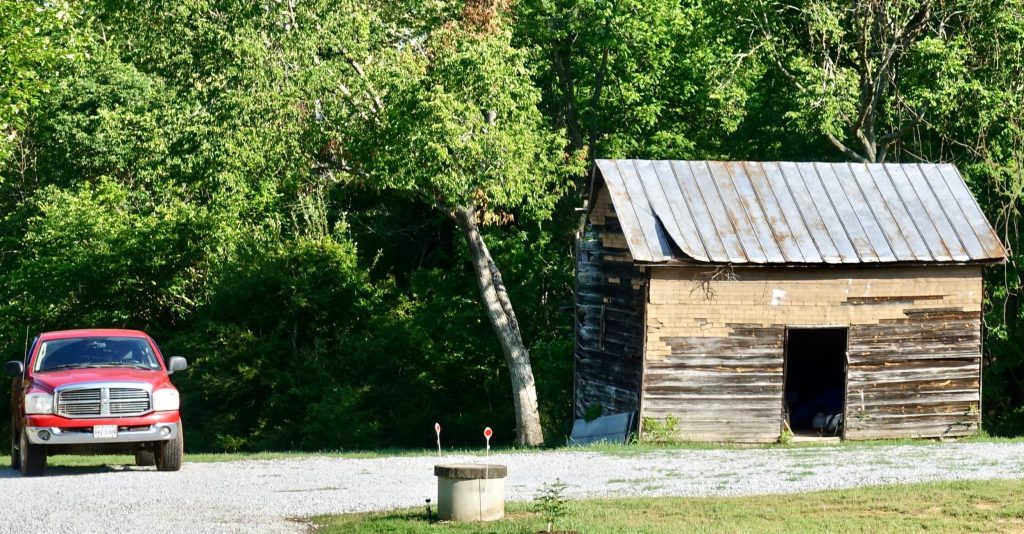 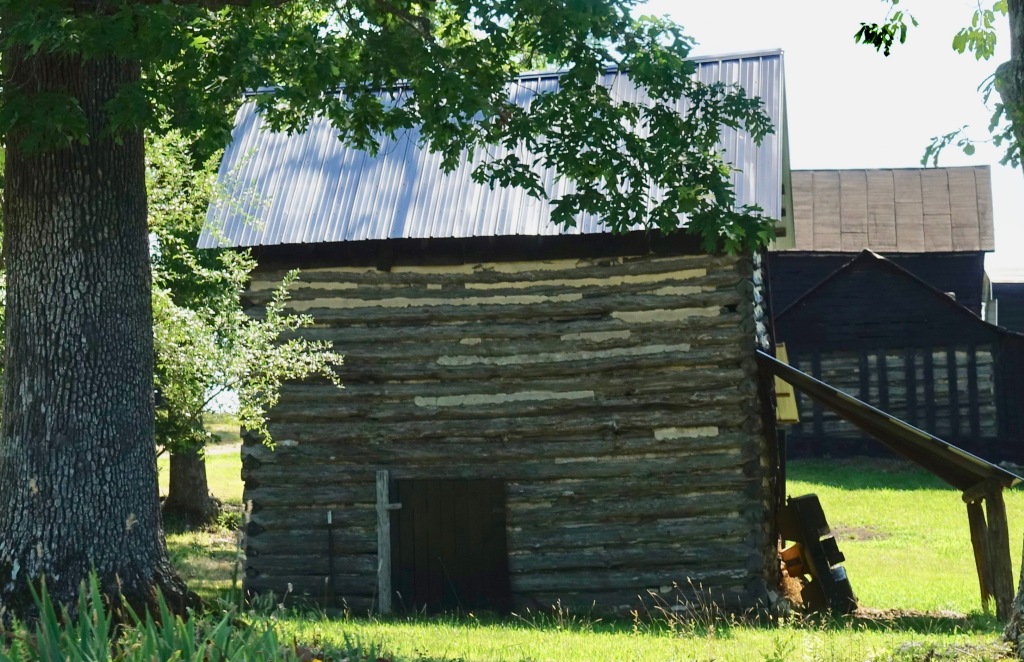 State route 49 had almost no traffic. 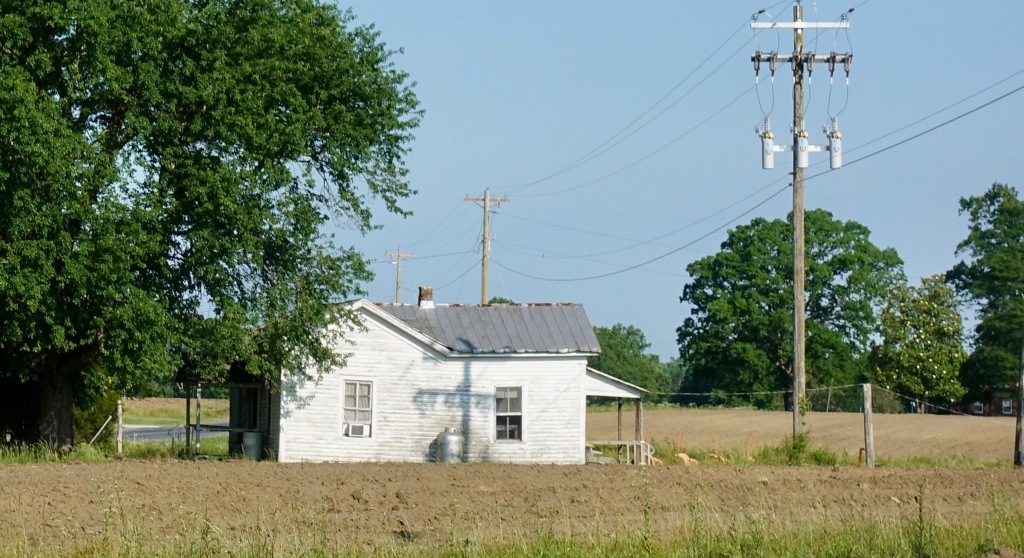 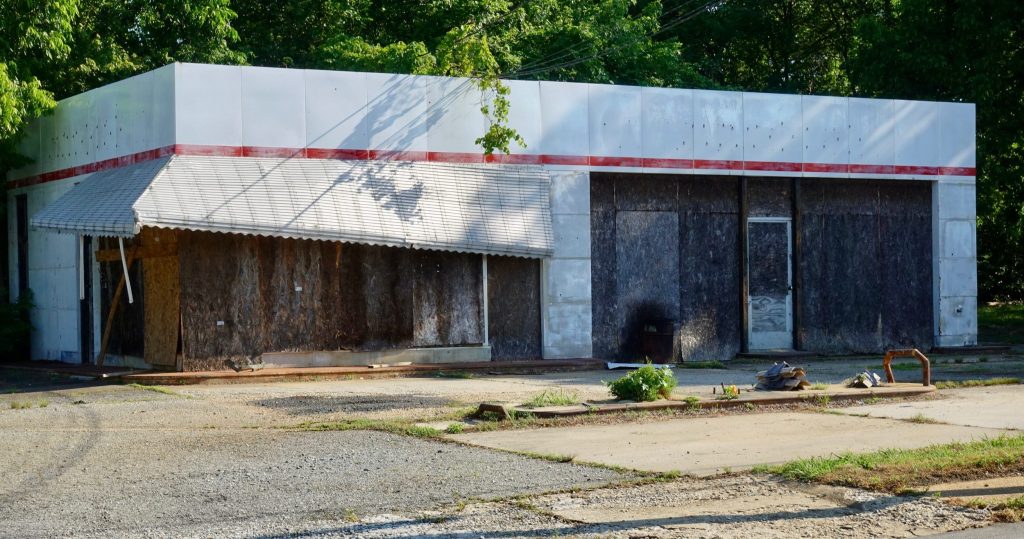 I had arrived at Chase City!

I noodled around by bicycle through the downtown. 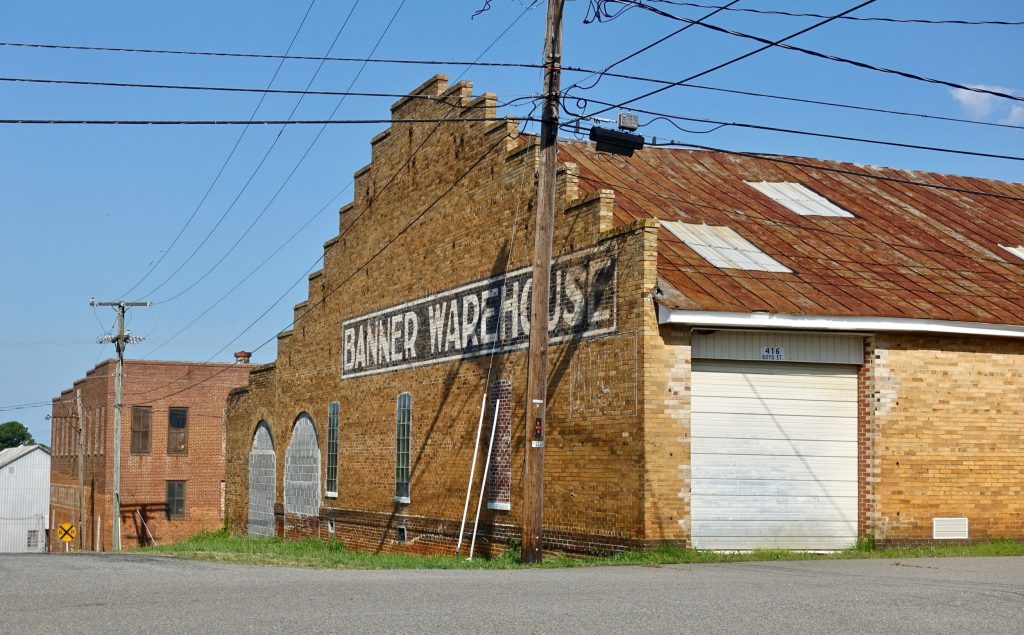 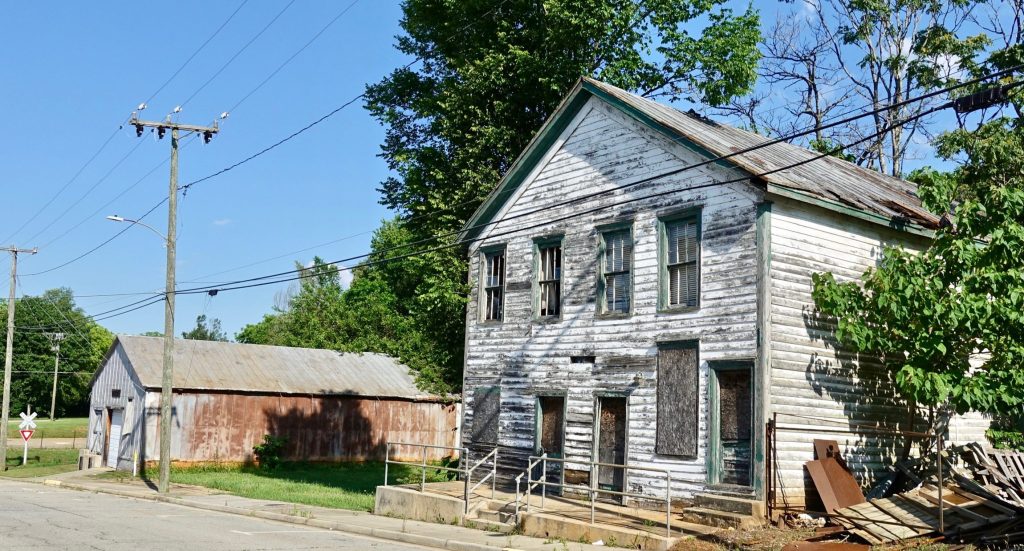 Compared to other places I have visited Chase City is keeping up appearances.   Yes, most storefronts were empty but there was a real CVS downtown and the “city”  did not look completely dead.     Some civic organization had set up picnic tables right downtown.  It was still only 9:00 AM, time for breakfast!   I stopped and took out my peanut butter and jelly sandwich and read the Sunday NYT on my cell phone.

I am sure my friend Tom knows of houses of (mostly dead) relatives all over town.   I do not know which houses they would be so I took pictures at random. 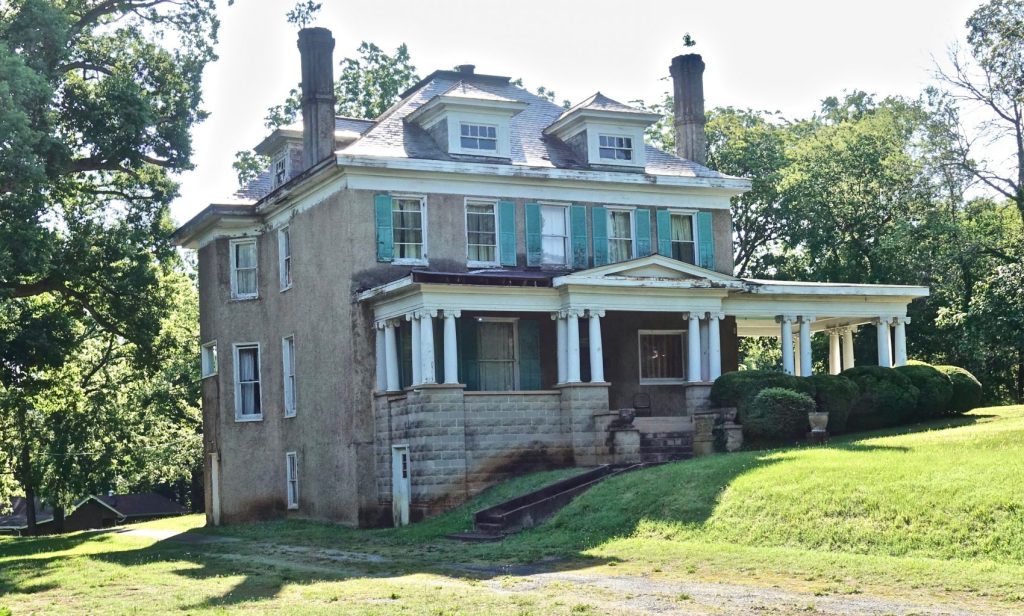 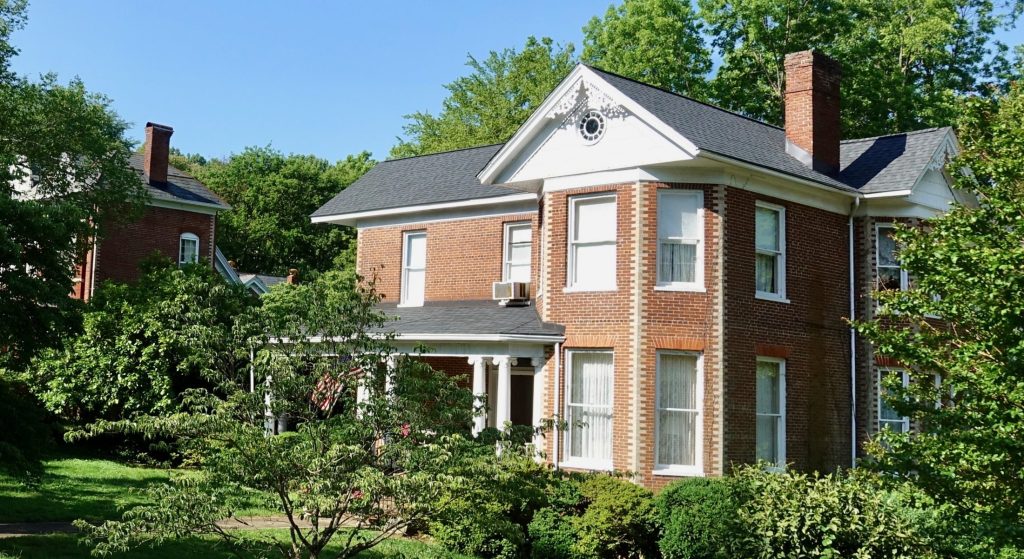 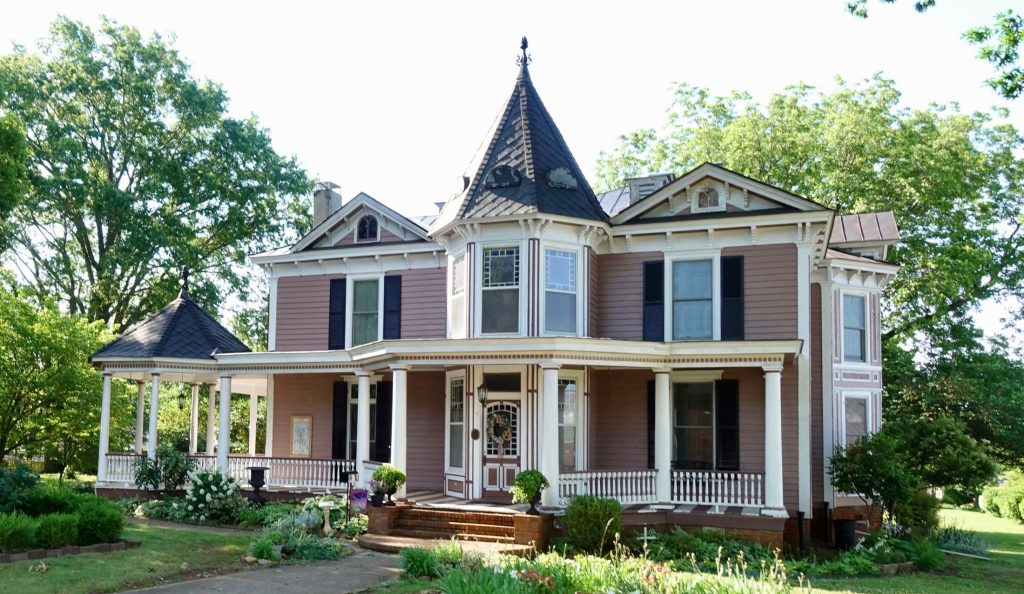 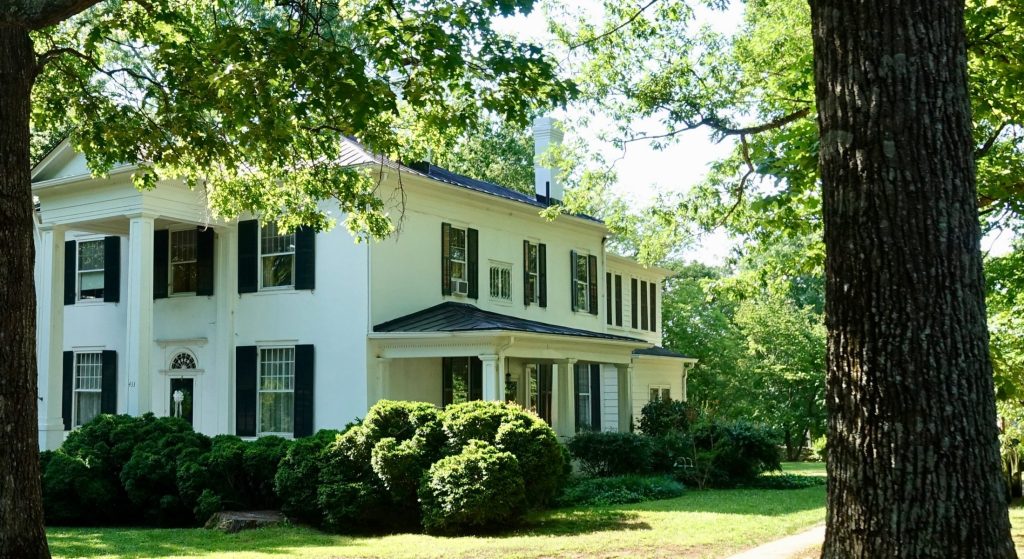 It seems very Virginia to put all this detail into a historic preservation sign. 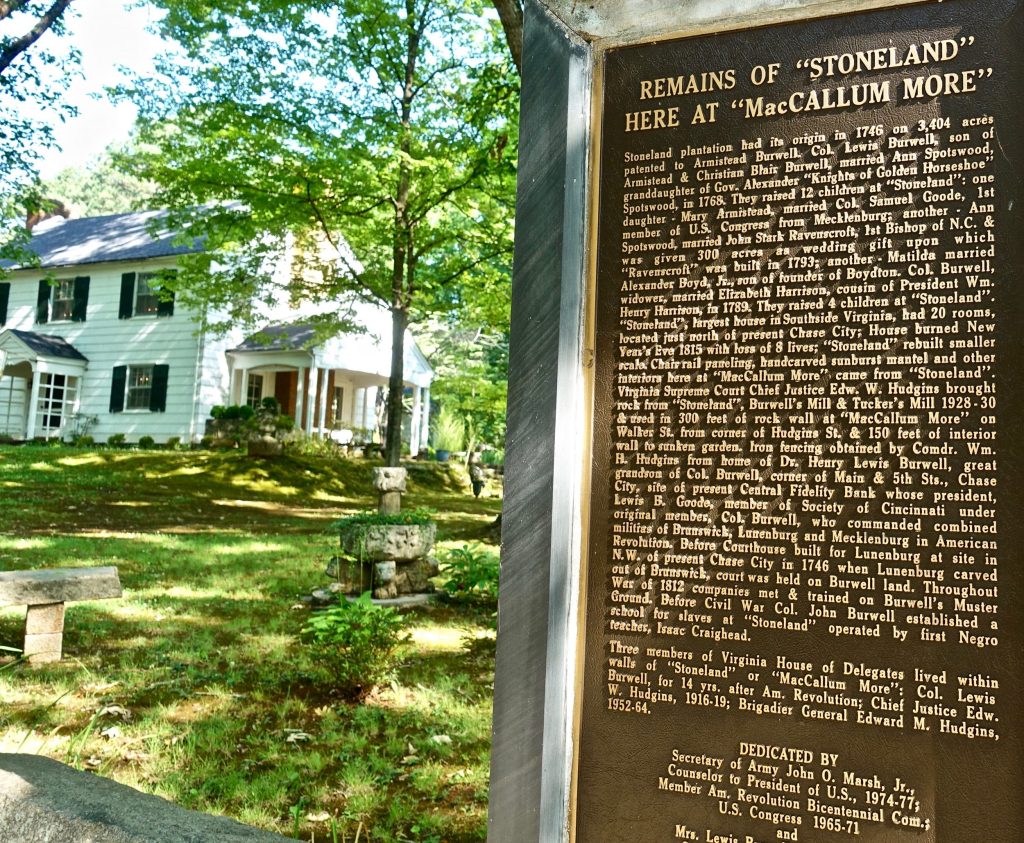 It was getting hot and I still had to bicycle all the way back to Clarksville.   Heading out of Chase City I passed THREE pre-WWII gas stations within a block or two of each other   The one with the fake Gulf sign has a plaque saying it was built in 1920. 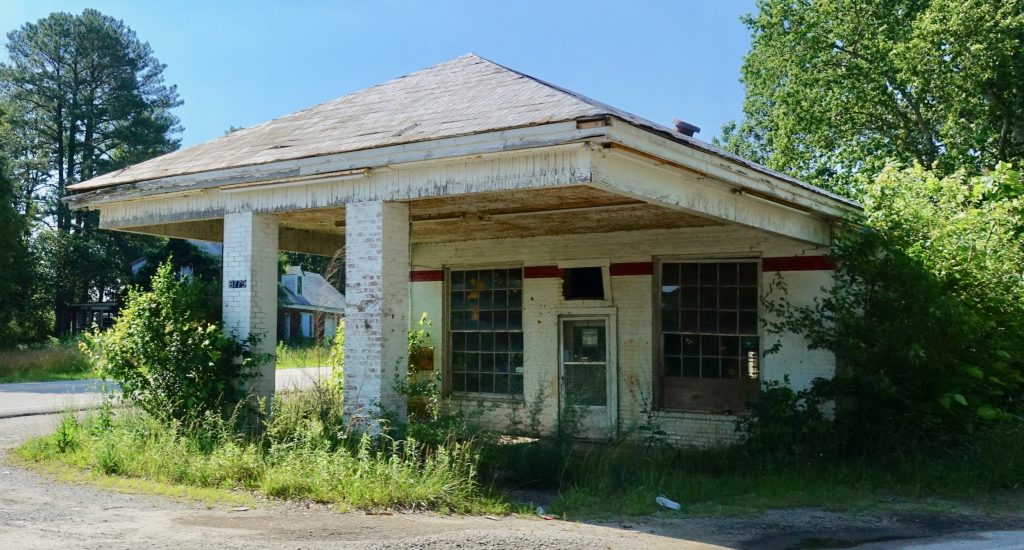 On the way back I took a different route on smaller roads with even more pleasant bike riding.

I passed through the “town” of Skipwith VA.

I passed the county high school Bluestone High School (mid-century modernism!).  It sits by itself confidently in the countryside despite being in what seems to be the middle of nowhere.

As I passed back through downtown Clarksville on the way back to my car I saw this junk lying between two buildings. 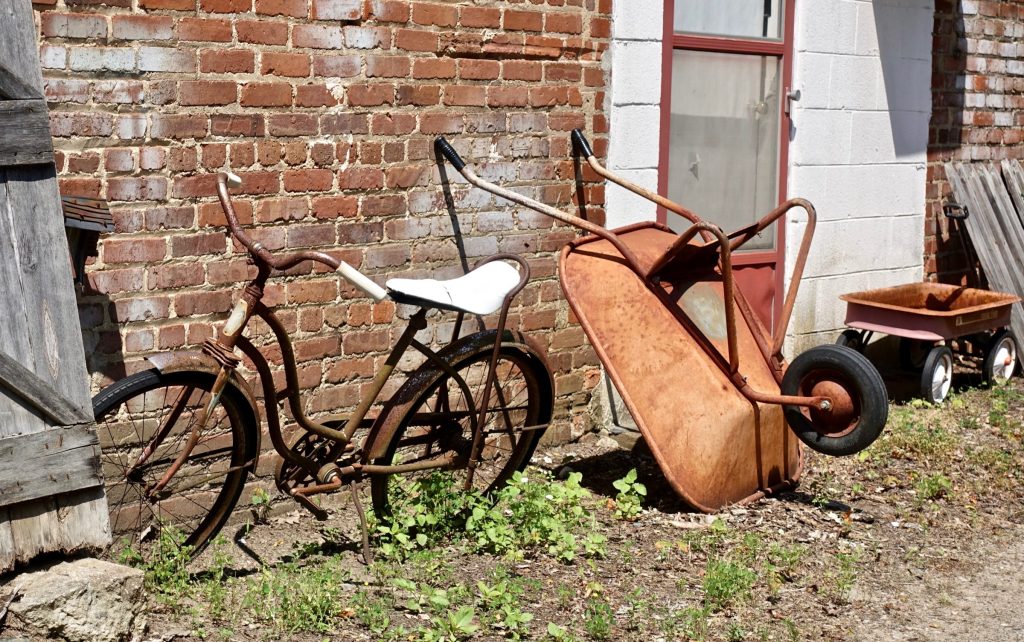 I made it back to my car by 11:30 AM.   I was able to drive home in time to make a delicious lunch for myself at the apartment back in Chapel Hill.