Tootie and I have been staying more and more frequently at our friend Kirk’s place in New Orleans.   It is relaxing just to hang out there.   This time we stayed in the upstairs unit.    It looks out over the street.

Kirk allows us to store bicycles in the crawl space under her house.   We took them out on our arrival and kept them in her side yard.   We rode frequently around the city.    In addition to Tootie’s blue Schwinn, I have two bicycles there now, my Schwinn Typhoon for city use, and an older ten speed for longer trips

Kirk’s house and and its adjoining units are most impressive looking from the front. 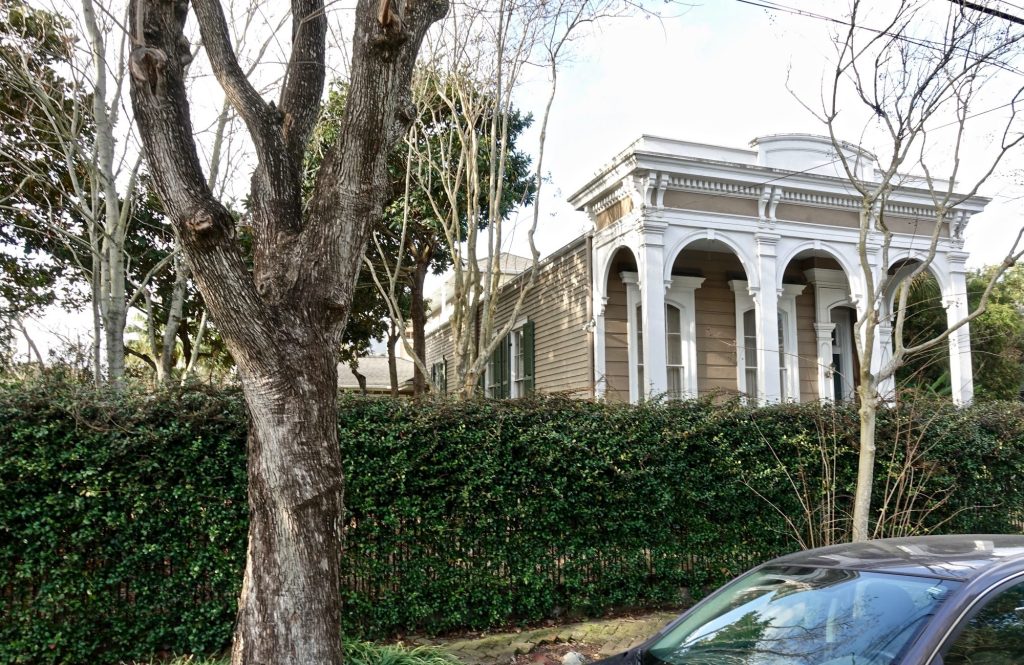 Early one Sunday morning I took a day long bike ride on my Lambert framed ten-speed.   I bought this bicycle used in Virginia Beach in the fall of 1974 but have replaced every part of it except the frame, which itself has been repainted more than once.   I would hate to throw the bicycle away so it stays stuffed underneath this house in New Orleans.

I was headed out to “the bayou.”    I chose as a destination an end-of-the-earth place east of New Orleans that had been named in a Bob Dylan song back in the seventies.  Yes, there is all sorts of amazing New Orleans music but this Dylan song has stuck in my head.   If you are in a hurry push forward to the 1:37 – 1:45 point in the video.

It has taken me thirty years to realize that Louisiana mostly does not have a defined coastline.    Rather than a beach that defines the end of land and the start of the Gulf of Mexico, in Louisiana the marsh gradually devolves into open water.   The amount of land lost to water over the past hundred years has been significant and it continues to erode.

My bike ride would take me downriver first through downtown New Orleans and the French Quarter, then Bywater and the lower Ninth Ward, then the suburbs of Arabi and Chalmette.   Beyond that it was a series of two lane roads that peter out into the marshes.   Press the minus sign on the map below and scan outward to look at the big picture, how the coast is disappearing.

New Orleans has so many historic areas that it makes my head spin.   On this trip I chose to take the less scenic but more direct route following the Mississippi along the docks on Tchoupitoulas Street.  The cranes on the right side of the picture are on ocean-going ships in the river. 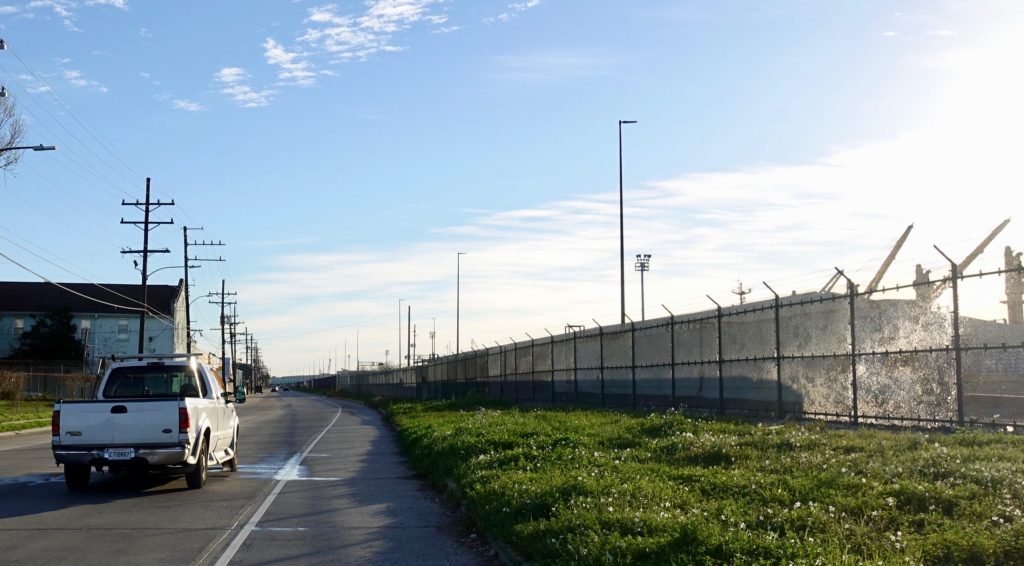 An ignored piece of modernism is the Jackson Avenue Ferry terminal, built sometime in the sixties or seventies and abandoned when the ferry to Gretna was discontinued.    I like its style.

It was the beginning of Mardi Gras season.   Along Tchoupitoulas Street floats were being prepped for parades later the same day.

Five years ago in my blog I said that Bywater in New Orleans was the coolest place to live in America, for those to whom coolness is a factor.   It remains a nice place but soaring real estate prices have made it less accessible for struggling artists.    I still like its style.

I stopped for breakfast at this place on the Arabi / Chalmette line, near the border between New Orleans and St. Bernard Parish.    This is where the suburbs begin. 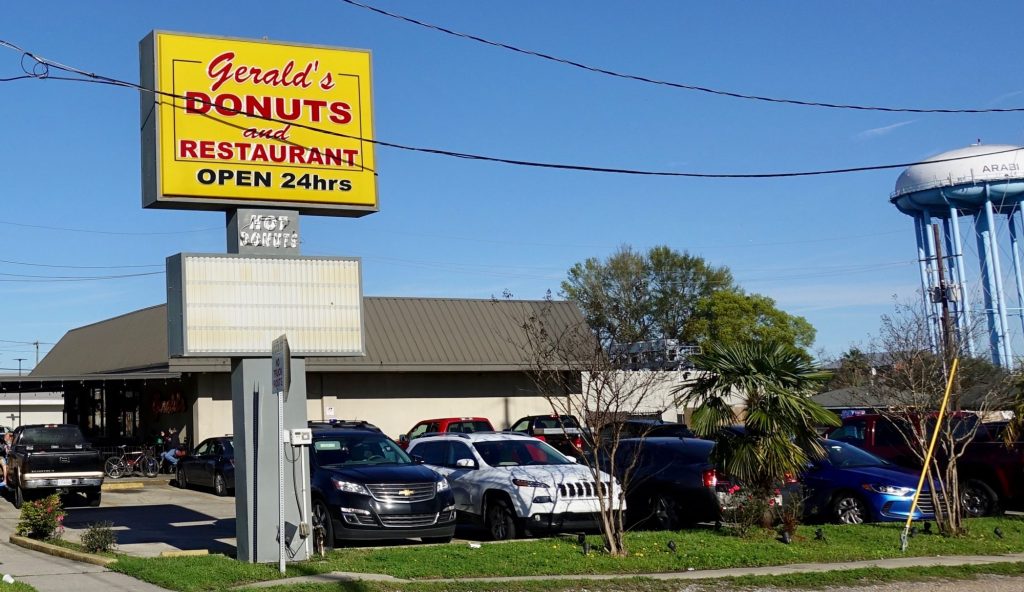 I spent some time chatting over bacon and eggs with an older guy with a distinctive accent.   He had lots of complaints about the V.A. health care system.   The New Orleans Times Picayune recently ran an article bemoaning the slow death of the New Orleans “yat” accent.   A New Orleans accent is certainly not Southern, it sounds more like Brooklyn than anything else.    As a parallel, because of its physical isolation, Long Island is culturally an intensification of working class New York City culture.  In the same way Chalmette is a prime stronghold of the “yat” accent.   Until about twenty years ago the only way in and out of Chalmette was to drive back through the New Orleans Ninth Ward.    Chalmette, like going to the swamps of Delacroix that lay past Chalmette, felt like biking to the end of the earth.

I biked through Chalmette neighborhoods with their razor straight streets. 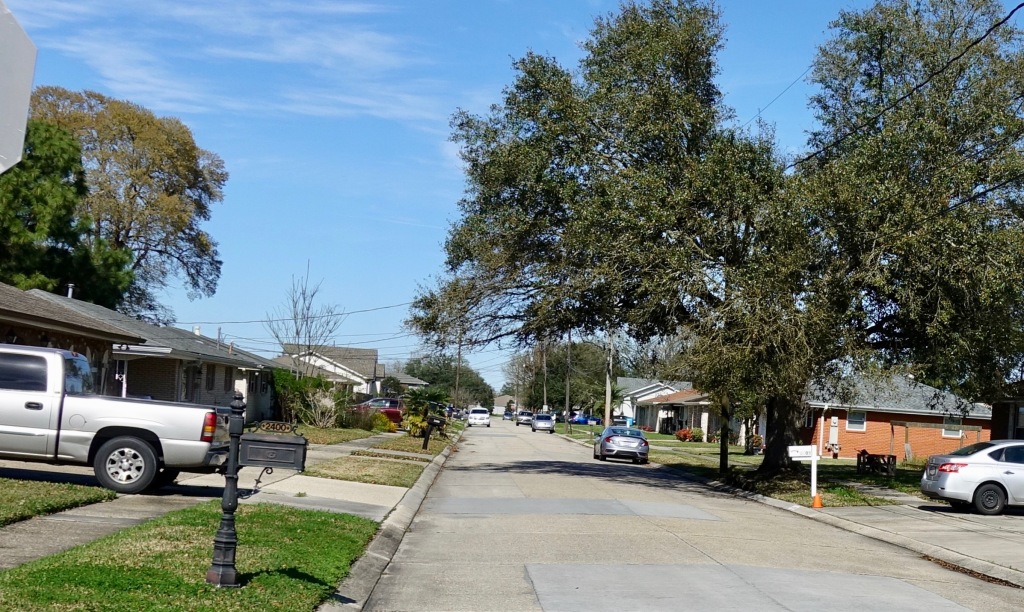 New Orleans had a big influx of Italian immigrants in the first part of the twentieth century.   Rocky and Carlo’s (“Ladies Invited”)  was closed when I passed it at 9:30 AM.  New Orleans proper used to be full of reasonably priced Italian-American-Creole restaurants, where one could get an oyster poor boy but also spaghetti and meatballs.  These places are now mostly in the suburbs.   At Rocky and Carlo’s their speciality is macaroni and cheese.

Beyond Chalmette I passed the Meraux refinery. 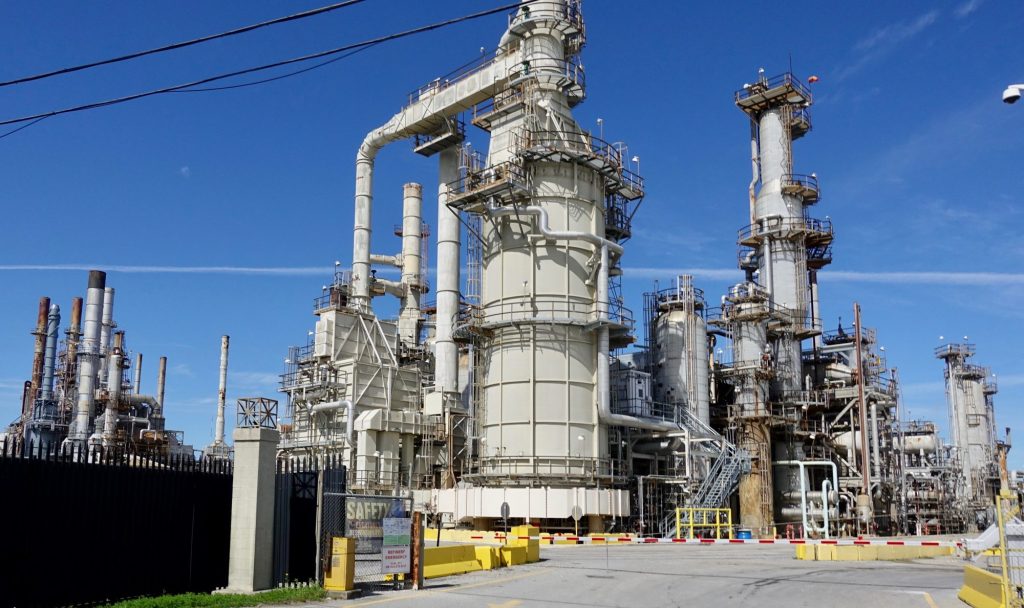 Eventually things opened up as I headed east out into the bayou country. 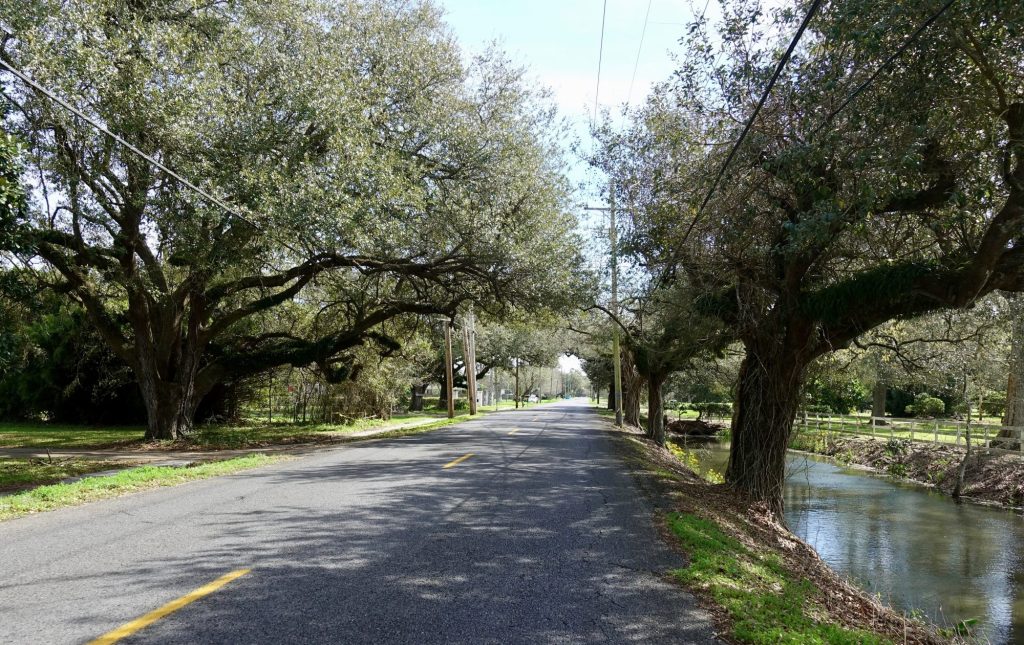 In a few remote places of the bayou country of Louisiana there supposedly are people still speaking French.  On the other hand, in this far eastern part of Louisiana, in St. Bernard Parish,  Canary Islands Spanish of the 1700’s was spoken here until quite recently by people called Isleños.   The road passed by their graveyard that had Spanish names like Acosta, Deogracias, Gallardo, and Nunez, some with nonstandard spellings, like the name Goutierrez.

Past the town of Poydras there is a newer highway.   The old road, running parallel about a quarter mile south of the new highway, is refreshingly free of traffic and perfect for bicycling.     The Parish used a blunt instrument in keeping cars from using the old road as a throughway.   I easily walked the bicycle around the barriers. 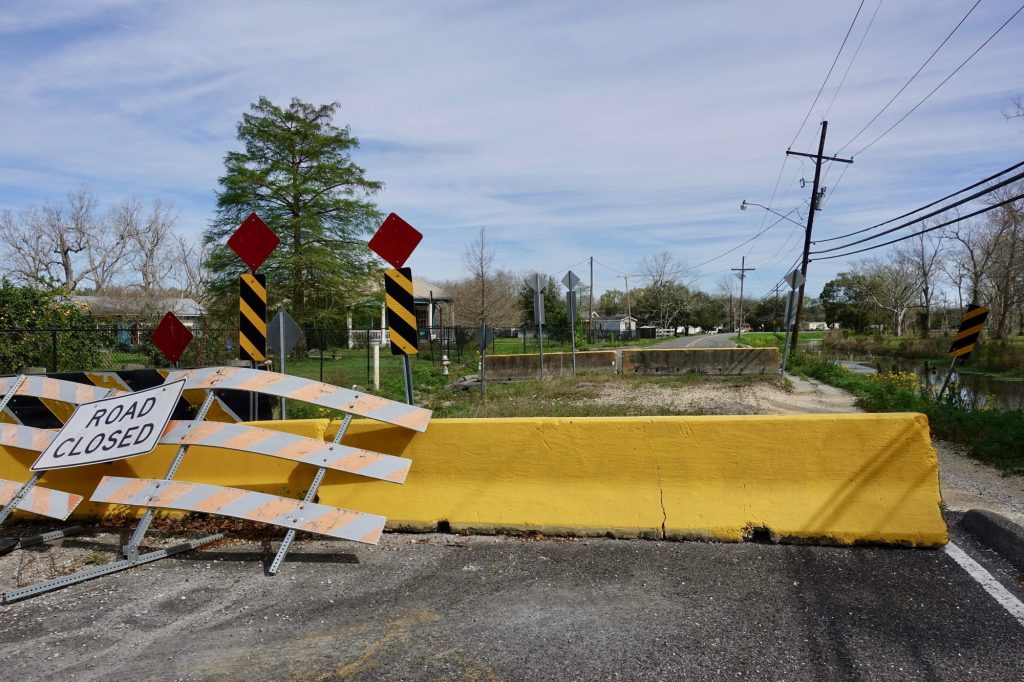 Even this far south, the winter is still, well, the winter.   The temperatures were in the mid to low sixties.   This did not seem to stop these kids from swimming in the bayou. 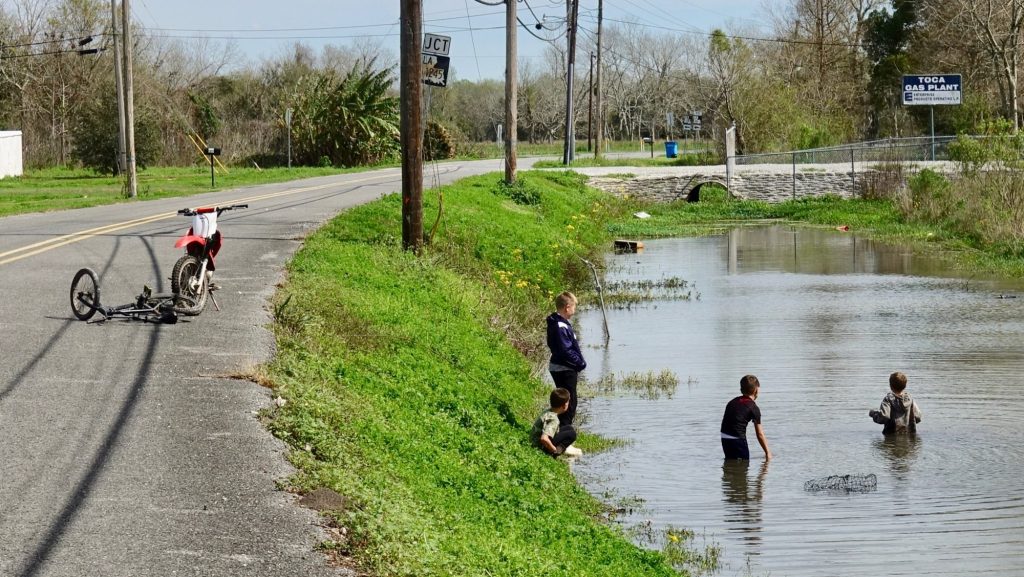 While the map labeled certain areas as “towns,” human settlement pretty much just lined the two lane road, which followed along a bayou.   Counterintuitively, the highest ground here is along the bayous, next to the water.   This sign below was encouraging, even though I had not yet arrived at the area that the map called Delacroix.

The road passed by the Kenilworth plantation house, from as early as 1759. 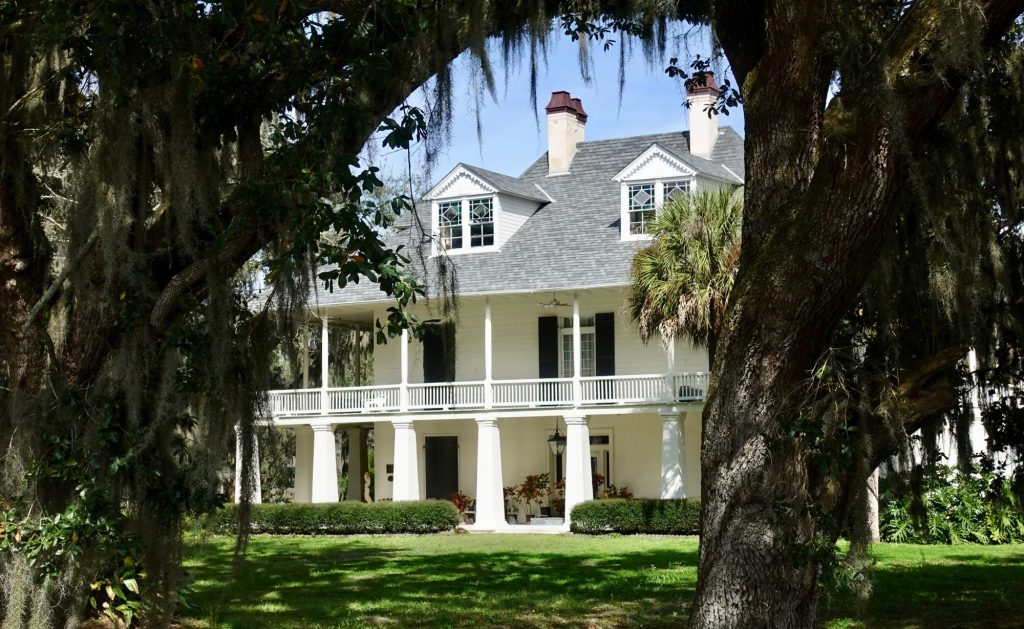 Just before the area called Reggio, I passed through this huge floodgate.   Beyond I imagine there is no stopping the water in any shape or form.

Beyond that gate the road continued, but the water seemed even closer, the land more precarious.

Many buildings were vaulted into the sky.   I imagine Hurricane Katrina wiped out about everything else. 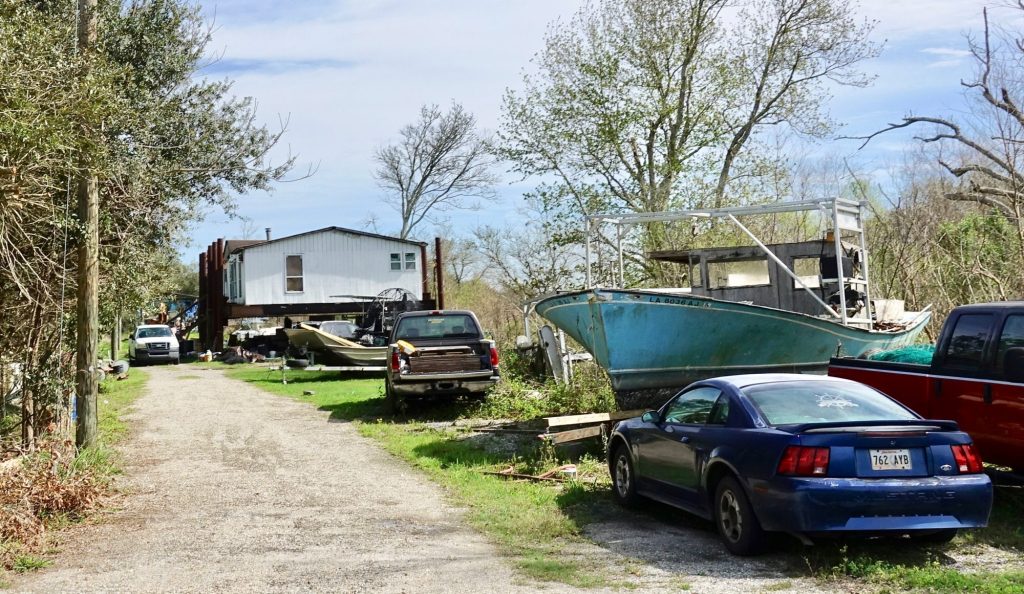 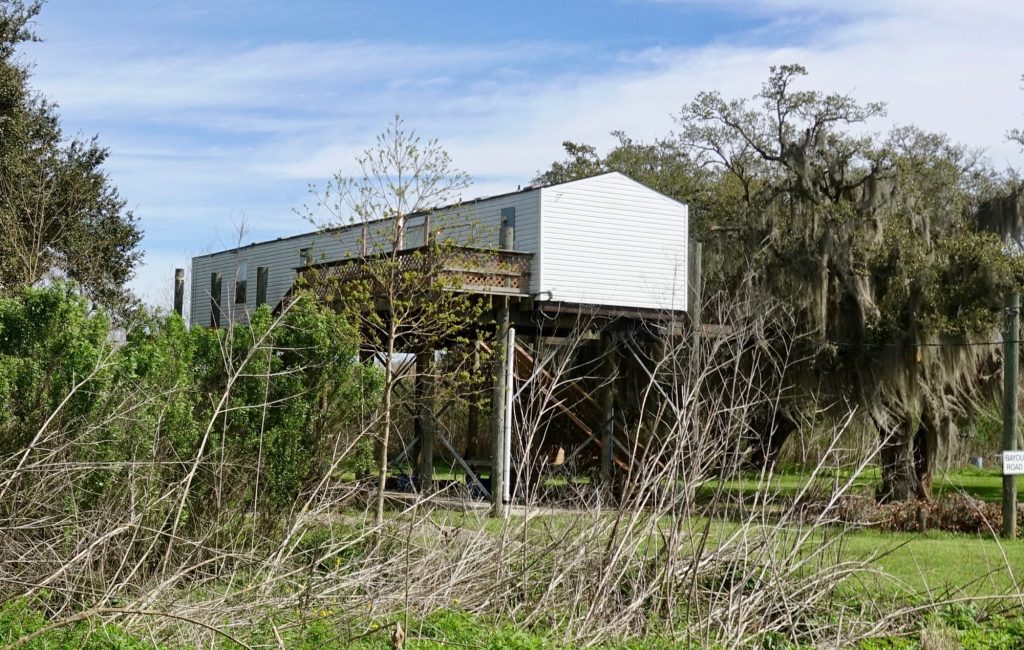 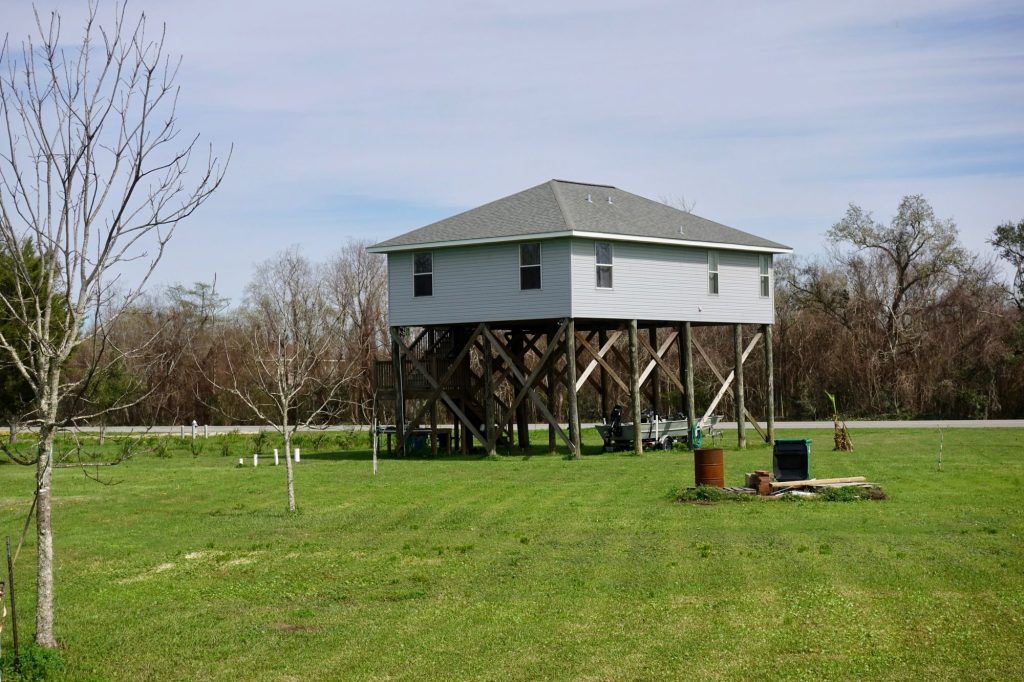 Just past Reggio I decided to turn around.

The road continues about eight miles further to a dead end that the map labels as Delacroix.   Years ago I went there in a car and the houses and the terrain look about the same as they do in Reggio.   I wanted to return to New Orleans at a reasonable hour.   I got back to Kirk’s in Uptown in time for the late afternoon Mardi Gras parade.